In recent years I try to spend some time, from mid to late August, looking for migrating Common Nighthawks from the High Ridge Wildlife Management Area. From this vantage point I have a nice view to the east south east toward the city of Fitchburg, Mass. The first few years 2001,2002 and 2003 I was watching for my own curiosity and to compair my numbers with others. Observers such as Fran McMenemy, Bart Kamp, Shiela Carrol and Mark Lynch have tallied excellent numbers (some evenings counting 1000+ nighthawks!) from various points within and near the city of Worcester, Ma.

More recently, I have fed my data into a more formal nighthawk survey, organized by Jeff Slovin and Hank Norwood.

The survey web site can be found here: http://borobirding.net/nighthawks/

To date I have been out 5 times, all from the Westminster section of this WMA, with the following results:

It appears the major numbers have a little bit later than previous years, not only from my site but from others within the survey area. Sunday evening appeared to be the beginning of the major migration
Posted by Tom Pirro at 10:19 AM 2 comments:

My girl friend Laura and I did some hiking in the Presidential Range of the White Mountains of New Hampshire last week. This was an overnight stay at the Madison AMC Hut, located on the col between Mt. Madison and Mt. Adams, both 5,000+ peaks above tree line.
The first day we'd hike 3.7 miles on the Airline Trail to the Madison Hut (a 3,500 foot climb), drop our packs at the hut and continue the final 1/2 mile to the Madison summit with a minimum of gear. Bird song was quite sparse, being very late in the breeding season, but Hermit Thrushes and Red-eyed Vireo were heard at lower elevations on the climb. Family groups of Golden-crowned Kinglets, Red-breasted Nuthatches, and both species of Chickadees (Boreals were at the higher elevations in spruces) were present. 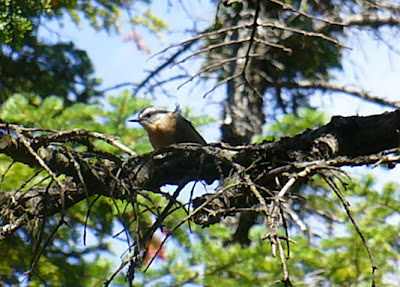 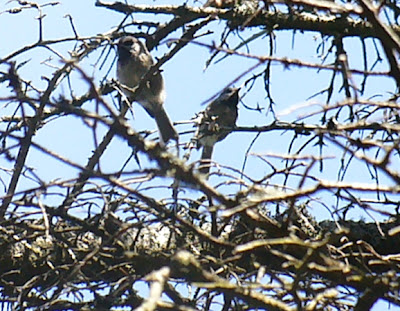 Once we broke the tree line the views were spectacular looking up the "Knife's Edge", a sharp ridge line, that the Airline Trail follows to Mt. Adams. It took about 4 hours to reach the hut, the occasional stop for birds, water breaks and to enjoy the views...no speed records on this trip. I did manage to see one Bicknell's Thrush at the edge of the tree line, I had a nice look and was able to rule out Swainson's and Hermit Thrushes. Once reaching the alpine zone Dark-eyed Junco and White-throated Sparrows were quite common. 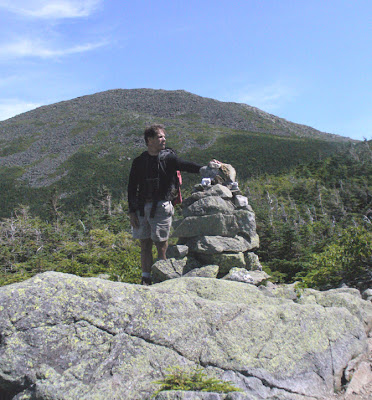 I am enjoying the view with the Madison summit in the back ground.

It was nice to leave the packs at the hut, as the climb to the summit of Mount Madison, from the hut, is essentially like climbing a 500 foot rock pile. A few Ravens were seen in the area and 3 Pine Siskins flew overhead calling near the summit. 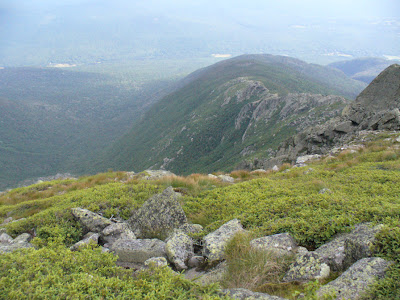 The Air Line Trail follows this sharp ridge line to Mt. Adams, a side trail leads to the Hut and Mt Madison. 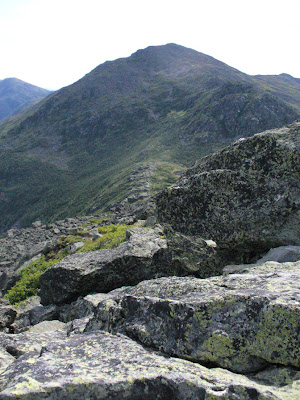 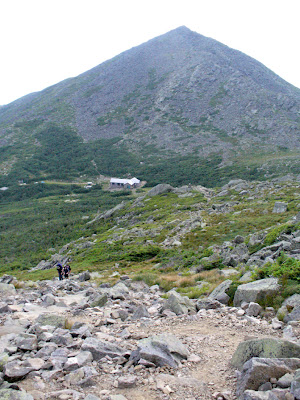 Madison Hut photographed from the climb of Mt Adams, with Mt Madison in the background Mount Washington from atop Madison, note the auto road (left) and the plume of smoke from the Cog Rail Road just to the right of the summit.

The accomadations at the hut were very nice, a friendly staff, home cooked dinner (pea soup and stuffed shells) and breakfast (home made bread, oatmeal, scrambled eggs). Sleeping arrangments are 2 co-ed bunk rooms with 26 people per room. It had been years since I slept in a bunk, so took the forth level.

Monday morning was gloomy, rain was expect in the afternoon and thunders stroms later in the afternoon. So we left our packs taking only water, a snack and light rain gear, to summit Mt. Adams, a rocky 1,000 ft. climb (see below). After 10 minutes on the summit some rain began (about 5 hours early) and we quickly headed back to the hut, to avoid being above tree line if lightening should arrive. While the wind was not too strong, the combination of wind and rain made conditions cool enough to numb the hands. We made it back to the hut before the heavy rain began, traveling light worked well for moving over the wet rocks. 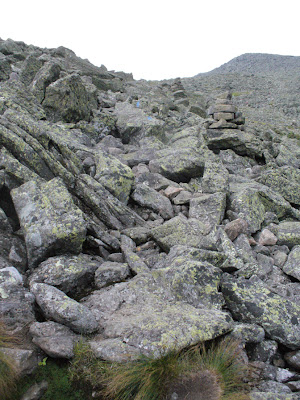 The rocky trail up Mt. Adams 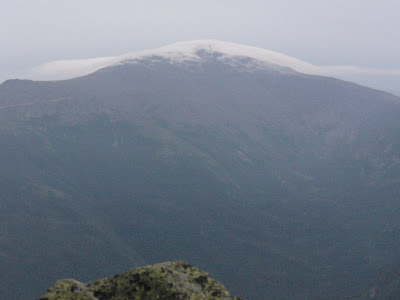 After reaching the hut and gathering up our packs, we headed back to the car down the Valley Way Trail in the rain. This worked well because this trail get one back below tree line a few hundred yards from the hut, giving shelter from wind , rain and later some lightening. I heard a few more Boreal Chickadees on the hike down but little else. This more sheltered trail may have been better for birding than Air Line Trail, but the Air Line offers more dramatic views but less protection in fowl weather.