I spent a few hours in the east Quabbin area this morning and had a few nice sightings, but a female Common Merganser and 5 young (in tow) was the best. There was also a pair of Common Loons in the immediate area and a Bald Eagle offshore on a small island. From what I understand that eagle's nest had colapsed earlier this season and the young didn't make it. I would imagin that eagle pair will find a more sturdy tree for next year's nest site. 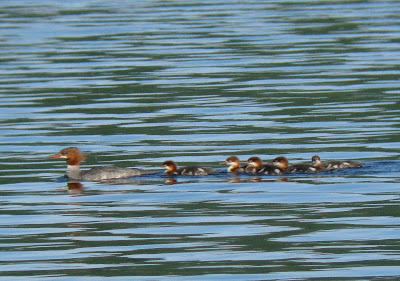 A female Common Merganser with 5 young in Petersham (at the location of the former township of Greenwich), a very uncommon nesting species in Worcester County. When they are found nesting in the county, its typically in the Quabbin area. 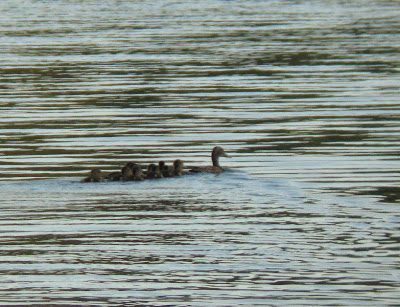 A Mallard Family from grave's Landing 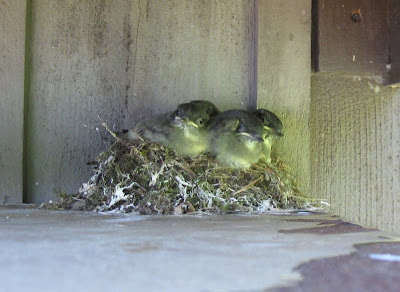 A nest full of Eastern Phoebe nestlings, the "guy" to the right and front seems a little camera shy.
Last week I found a fledgling Horned Lark at the Gardner Airport, the photo below is not too clear. 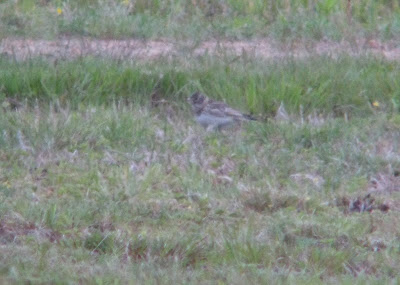 Fledgling Horned Lark, alone in this shot but it soon took flight and chased an adult which was likely its parent, seeing only one or two pair nest at this locale.
Several years back (at this location) I watched an adult female walking in the short grass, it disappeared behind a tuft of grass. Upon inspection, the bird flushed and I found its nest in a shallow hollow in the ground, tucked under the tuft of grass.
Posted by Tom Pirro at 3:32 PM No comments: 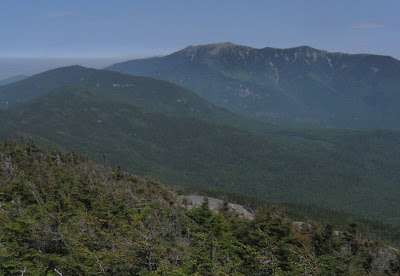 Cannon Mountain to the lower left and the Franconia Ridge to the right, from North Kinsman Mountain.
Karin and I camped in Woodstock, NH (Water Rest Campground, having some of the cleanest showers and restrooms you'll find at any campground!) over the long weekend enjoyed a bike ride and a 10 mile day hike up to the "Kinsmans", two 4000+ foot peaks just south of Cannon Mountain.
While pitching the tent we discovered a noisy neighbor had already setup "camp" right next door, fortunately it was NOT a gang of drunken college students! 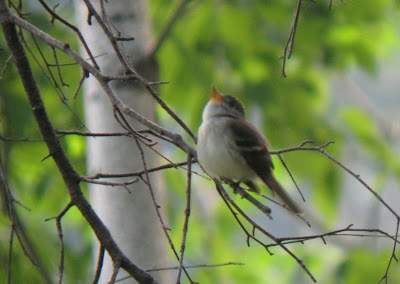 This Least Flycatcher sang (if you want to call it that) very often only 20 feet from the tent, it even sang a few times in the middle of the night.

A bike along the Franconia bike path on 5/30, was scenic, which had its share steep "ups" headed north, but of course on the way back...it was smooth coasting" in those sections! During this ride it seemed at one American Redstart was within constant "ear shot" the whole 8.8 mile ride out and back. 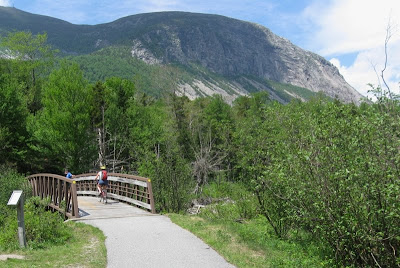 The Cannon cliffs along the Franconia Bike (aka recreational) Path.

The hike on Monday 5/31 started on the Mount Kinsman Trail, approaching the mountain from the west side, the trailhead being off Rte 116. Early on the forest was deciduous with a light mixture of hemlock and spruce and bird species heard included Ovenbird, Black-throated Blue and Green Warblers with a few Blackburnians scattered in.

Once reaching 3,000 feet in elevation the forest change to Balsam Fir and Blackpoll Warblers became the most conspicuous bird heard and seen. A Boreal Chickadee put in a brief appearance at about 3,200 feet but surprisingly not another was seen or heard along the the way. A few golden-crowned Kinglets were nearby and one Ruby-crowned Kinglet was singing in the same area on the way back down. 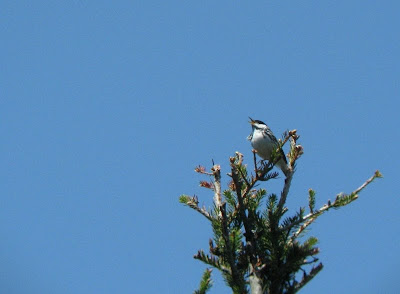 A total of 5 Yellow-bellied Flycatchers were nice, their "che-burt" calls being noticeably "flatter" in pitch than the "snappy" Least Flycatcher's "Che-bek" song we'd heard at our campsite. 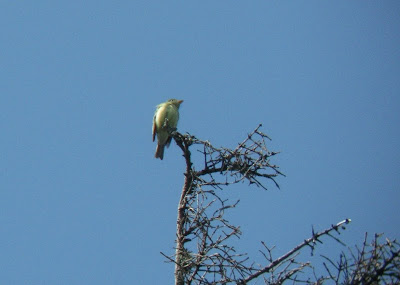 This Yellow-bellied Flycatcher sang and posed nicely on the upper stretch of the Mt. Kinsman trail.
I had hoped a Gray Jay might make an appearance, it is always so enjoyable to hand "feed" these tame birds, as on a previous hike in 2008. None were seen this trip, perhaps on a future White Mountain hike, ditto for a Bicknell's Thrush. We did not reach higher elevations until late morning and thrush song was quiet, though a few Swainson's were heard along the Kinsman Ridge Trail. 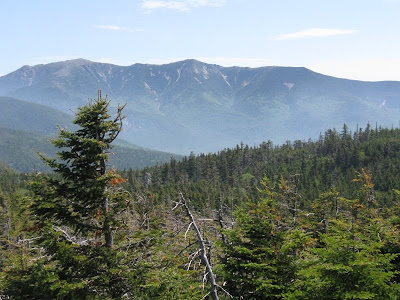