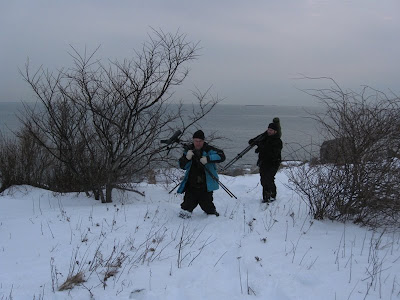 Paul and Dan play in the snow at Catherdral Rocks.

We made one major modification to our traditional route, Nahant was deleted. Their had seemed to be few reports of high scoring species from Nahant and we hoped to makeup any Nahant losses elsewhere with a more compact route. A rough overview of our route was Flax Pond Lynn, Essex(owling), Rockport, Gloucester, Essex, Ipswich, Rowley, Newbury, Newburyport, Plum Island, Salisbury and Amesbury.

We got a previously reported, and scouted, Northern Shoveler at 4:50AM on Flax Pond and stayed on it until the clock struck 5AM, the two teams at the location both received bonus points for simultaneously calling this 5 point species. Ambient neighborhood lights were enough to ID the species needed without the aid of a flashlight or high powered spot light. Also, previous to 5AM an Eastern Screech Owl began calling and fortunately it returned our screech owl imitation after 5AM. We left Flax Pond in Lynn a fine shape.

Our first owling stop along Harlow Road in Essex yielded a Northern Saw-whet Owl, that called nicely under perfect listening conditions. Only two team mates heard a Great Horned call from the same spot, it wouldn't call again, so we moved on. Fortunately we stopped again along Rte 1A and one was calling by the time the last door was shut....how long would these fortunes last?

We hit Andrew's Point next getting Harlequin Duck, Purple Sandpiper, Red-throated Loon, Red-necked Grebe along with other ocean birds. Around the corner Cathedral Rocks we scored on Razorbill and headed off the Halibut Point. We tried (but didn't expect) for a previously reported Dickcessel, missed it, however a small flock of White-winged Crossbills passed over calling and we added Cedar Waxing. Our fortunes kept pace on the drive to the Loblolly Cove we stopped twice to ID perched accipitors, the first a Sharp-shinned, the next a Cooper's, we would see 2 more "shins" and another "Coop" later on!

At Loblolly we'd get the Barrow's Goldeneye, from Atlantic Drive we got the King Eider and Sanderlings inbetween! On Eastern Point a nice adult Iceland Gull arrived just as we pulled in (with 2 other teams), Brace Cove got us "Jack" but the Peregrine was on the Gloucester City Hall weather vein. Gloucester harbor yielded Greater Scaup and Mute Swan but NO Thick-billed Murre. Checking the I-phone later we'd found not only did others get the Thick-billed Murre, but a Common was found and a Dovekie! Ouch!

We had high expectations for Comono Point Road, in Essex, but missed Red-breasted Nuthatch, Brown Creeper, Winter Wren and Golden-crowned Kinglet that Chuck and Rod had on Wednesday. But on the point we added Dunlin, about 50 were present, on the drive out a Swamp Sparrow added a little consolation! But, at least Rod and Chuck had TWO....guaranteed...GUARANTEED... White-crowned Sparrows from another location in Essex...ya right. Rod was still contentious on the ride home they were there. But, all was right in our world when we picked up Turkey Vuture about 15 minutes later, scoring another 3 pt. bouns!
In Ipswich, we picked up momentum with Northern Flicker, Brown Creeeper, Winter Wren and Eastern Towhee, all at one stop! Further on in Ipswich we got Horned Lark near Aguila Road. A Snow Goose that was near Ipswich Center on Wednesday was NOT there, but there was plenty of Snow. Labor-in-Vain Road turn out to be "Labor-not so-in-Vain Road" by producing Yellow-bellied Sapsucker and Hermith Thrush. 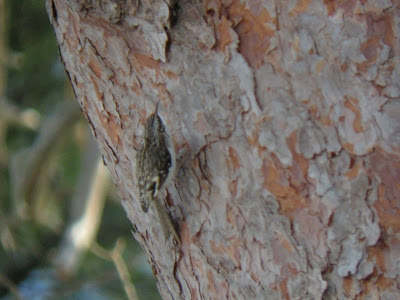 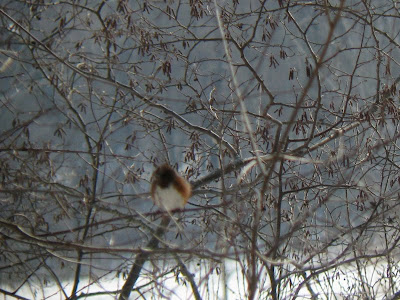 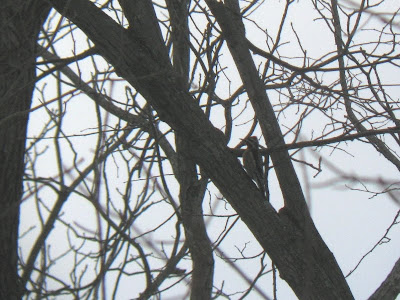 Sunshine Farm, on Rte 1A, in Newbury produced Horned Lark, Snow Bunting and Lapland Longspurs. We'd "hit" Plum Island with 80 species and 168 points, however Parker River NWR was "dead", but at least we added Rough-legged Hawk.

At the Salisbury State boat ramp we missed Savannah Sparrow , added 2 Lesser Scaup (apart from nearby Greaters) but Northern Harrier (who apparently hadn't packed the snowshoes) looked like it would be a big miss! Along Mudnock Road, in Salisbury, we added Brown-headed Cowbird and Red-winged Blackbird and it was now down to crunch time, with only about an hour left to cover a few stops along the Merrimac River. Nothing new at Cashman Park and Savoy Street...it was now looking like we'd not only dip on Northern Harrier but Bald Eagle too...oh my! Perhaps an eagle would be roosting near the Chain Bridge?

A Great Blue Heron was quickly found at the Chain Bridge, and the last 20 minutes were used to scan for an eagle. At about 4:47PM Dan spotted an adult Bald Eagle, perched across the river, and we all enjoyed our last addition with another team "Eagle Eyes". 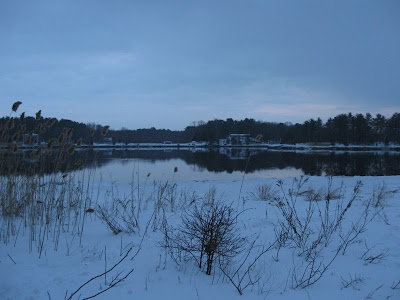 End of the day from the Chain Bridge area.
Once again, we had a great effort, more fun and even more laughs, while totaling 86 species, 185 points....and for the first time our route, time management, luck and strong team work was good enough for the Joppa Cup.

The Lark Sparrow continues at Devens 1/27

I was fortunate to veiw (and hear) the Lark Sparrow, initially found by Kevin Bourinot at Devens, this morning. After checking a few feeders in the neighborhood, I heard an odd sparrow like song, that sounded like it might some distance away. It turned out the Lark Sparrow was singing a muffled and incomplete version of its song, not 10 feet away in a forsithia right in front of me ! I was able to digi-bin a few shots............. 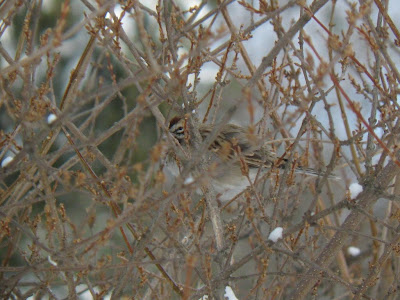 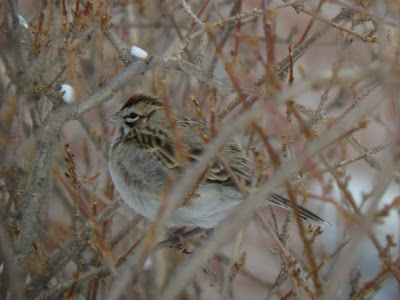 a better angle of the Lark Sparrow.

Below is a view of this species normal range, more information can be found at WHAT BIRD , including this map below: 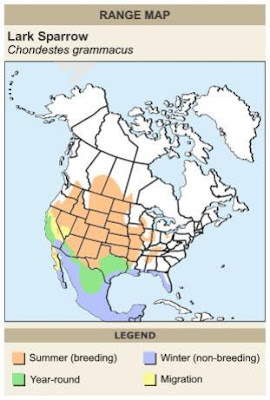 This was both a Massachusetts state and Worcester County bird for me...so Thank You Kevin!

Chuck Caron and I hit some "high spots" in Essex County on Saturday, starting at Salisbury State Park and ending on Cape Ann. The temp was zero when we left Westminster but there was no wind. 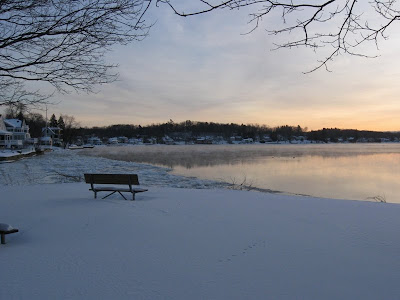 A nice scene along the Merrimac River in Amesbury.
Most of the Canada Geese along the Merrimac were still sleeping when we arrived near the mouth of the river. Long-tailed Ducks, White-winged Scoters, Common Goldeneye, Buffleheads and Red-breasted Mergansers were plentiful. 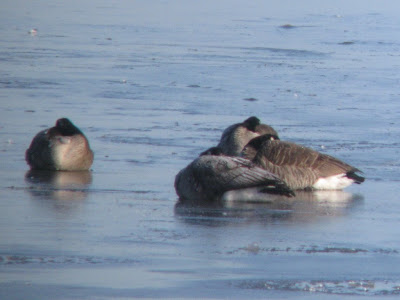 These geese were still frosted over.... 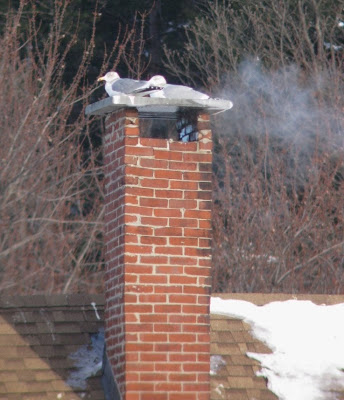 Gulls are very opportunistic, these two Herring Gulls in Salisbury, had found a brilliant solution to combat the early morning fridged temperature. 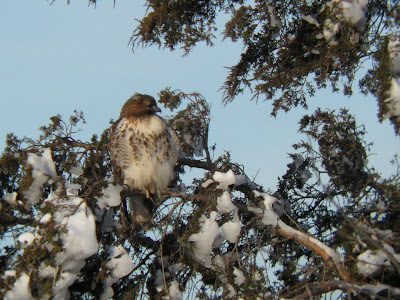 This handsome Red-tailed Hawk, along the entrance to Salisbury State Park, was enjoying the early sun.
At the Salisbury State Boat Ramp were a few Horned Larks, an American Pipit, and a Savannah Sparrow of the Ipswich race was seen well. A adult Bald Eagle was harrassing a few White-winged Scoters. Near the jetty was a Razorbill, Purple Sandpipers and a hundred+ Common Eider. 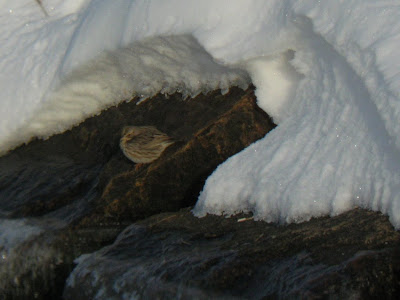 An Ipswich" Savannah Sparrow at the Salisbury Boat ramp.

At Cashman Park, on the Newburyport side of the river, was yet another American Pipit, but other than Mallards, Canada Geese and Ringed-billed Gulls there was little else. Joppa Flats had approximately 1500 Canada Geese, but we could NOT find a previously reported Greater White-fronted Goose.

The road on Parker River NWR was plowed to the very end, a Hermit Thrush near Hellcat was seen, we missed a Brown Thrasher that had been seen earlier, had a brief look at a Northern Shrike as it left its perch and a nice Rough-legged Hawk (light form) near Cross Farm Hill.

The overlook at Emmerson Rocks, lot 7, was productive with a few Snow Buntings, Horned Lark, another Savannah Sparrow (Ipswich from), a Northern Pintail and a young Peregrine Falcon that landed on the beach in front of us. 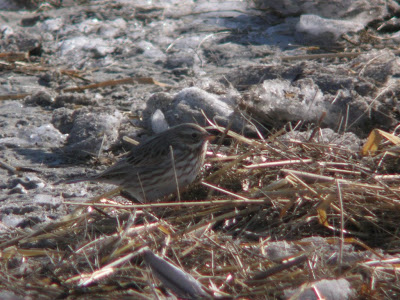 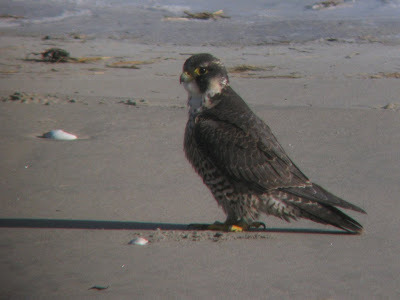 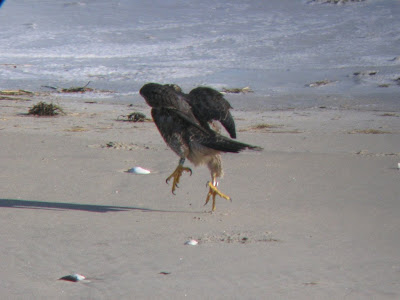 ...did a little hopping around before leaving. (I am seeking information on this banded bird and will report back when I get information)... I got a very quick response back for Massachusetts Natural Heritage: "14/X black over green, 2206-81828 is a juvenile male that was banded on May 24, 2010 in the nest box in Lawrence, MA. There was a full clutch of 4 chicks, 2 males and 2 females. "
Also here is a link to the banding "event" of the above Peregrine:
http://goodmed.zenfolio.com/p843972477
Several hundred American Black Ducks and about 80 Dunlin were along an exposed mud flat between the pines and Cross Farm Hill. On the drive out we had a good look at a Wilson's Snipe that a half dozen people were photographing at the North Pool overlook.
We headed off to Cape Ann for the afternoon, in route a Turkey Vulture soared over rte 1A. Jodrey Pier seemed to have very few gulls, but we did have a good view of an adult Iceland Gull and a Black Guillemot among the more common birds. At Eastern Point were a few more Iceland Gulls, a first cycle and second cycle, while at Brace Cove Chuck spotted a Glaucous Gull in flight with great Black-backed Gulls, this bird appeared be an adult to 3rd cycle bird.
Linda Ferraresso had directed us to the location of a Dickcissel at Halibut Point. Within 15 minutes of arrival we "had" the bird with time to spare for a trip to Andrew's Point were we enjoyed Harlequin Ducks, a Razorbill and a few Red-necked Grebes. 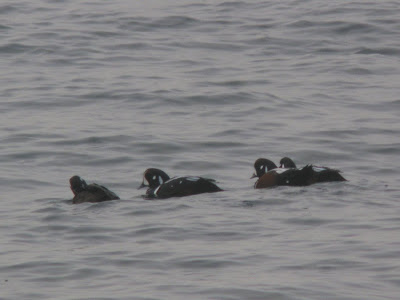 Harlequin Ducks, always a treat, at Andrew's Point.
Posted by Tom Pirro at 8:31 AM 4 comments:

My local patch has been fairly active with Barred Owls, over the past week I have sighted at least one on 3 occasions. During a walk this morning I flush one, while the one below flew toward me, in response to my screech owl imitation. After perching briefly it moved back into the forest. 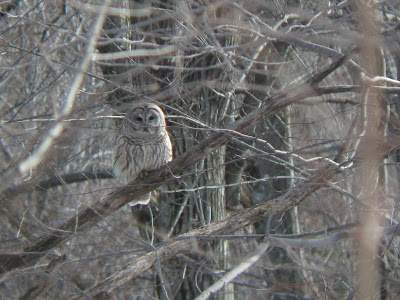 Barred Owl, just before moving into the forest.

Otherwise the walk was rather quiet, with only a few Pine Siskins. Sunday, 1/9, an adult Lesser Black-backed Gull was down the street, on Round Meadow Pond, with Greater Black-backed and Herring Gulls.
At a nearby farm, were a few "non-avian" new arrivals as last year's swine have been moved .... inside :( 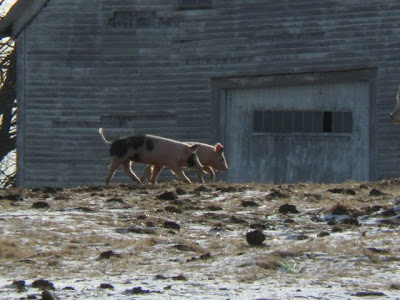 Enjoying the great outdoors....at least for the next 10 months.

I have only had a few redpolls at the feeder this winter, so I traveled up to Royalston in search of winter finches. At one feeding station, along a rual road a flock of about 40 were present. I looked carefully with the scope on the outside chance a Hoary Redpoll might be present, but none of the bird I "glassed" were even close. Even so, it was enjoyable and I also heard a few Evening Grosbeaks fly past overhead. 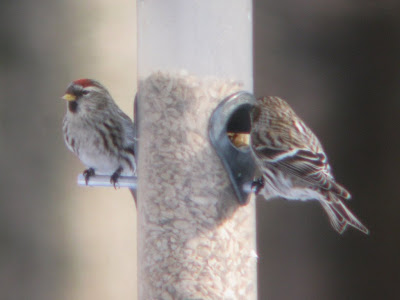 Front and back and back views. 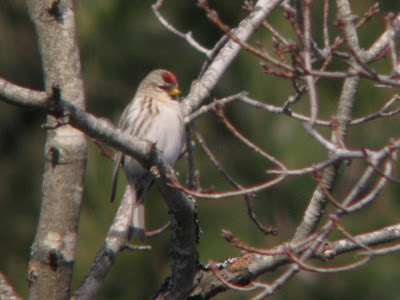 Perched in a Maple. 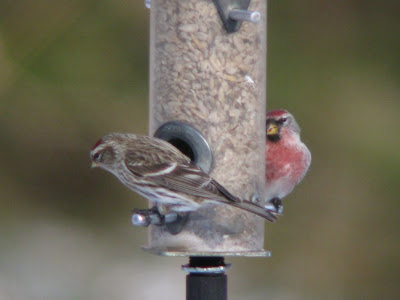 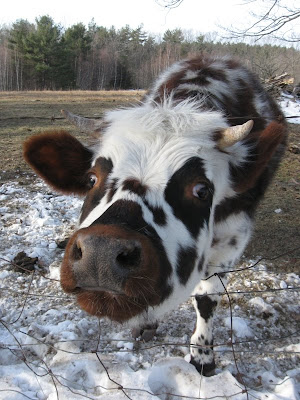 Curious
15-20 Pine Siskins are still coming to my feeders at home, but don;t tend to stay too long, while i walked out to the deck I heard a few Eastern Bluebirds nearby.
Posted by Tom Pirro at 10:40 AM No comments: