Last evening would be the first time I hike to an eastern ledge near the top of Mt. Hunger. I'd been told there is a fine north/north east view over Stodge Meadow Pond toward Mt. Watatic and the Wapack Range.
I started the hike from Holt Road, in Ashburnham, where the trail (the Mid-state Trail) runs adjacent to a large distrurbed area (looks like housing development that might be on hold) before traveling through deciduous forest. 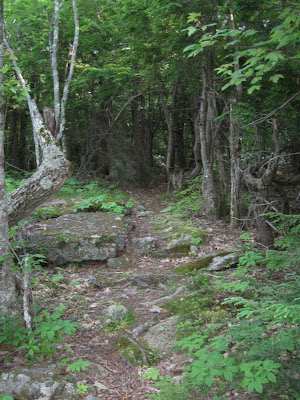 The distance to the ledge is approximately a mile and the elevation gain is very modest, about 300 feet...the view is a big payoff for the effort! 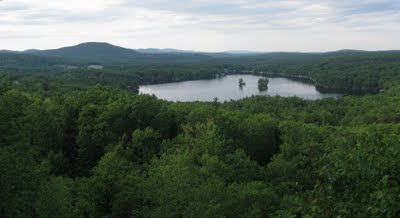 Stodge Meadow Pond from Mt. Hunger, Mt. Watatic to the left, North Pack and Pack just to the right of Watatic, Timberlost Farm is just to the left of the lake.

I scanned the lake for a while looking for loons and finally a pair swam far enough toward the pond's center for a view. As you can see from the photo above there are two islands that might be able to support a nest, however I don't recall ever hearing of a successful nesting of the species. 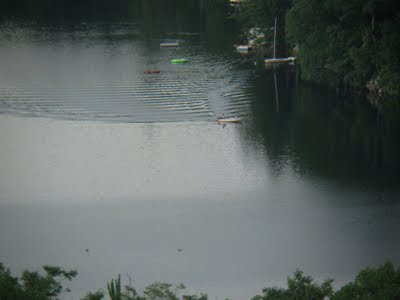 The two dots in the forground of the pond are Common Loons. 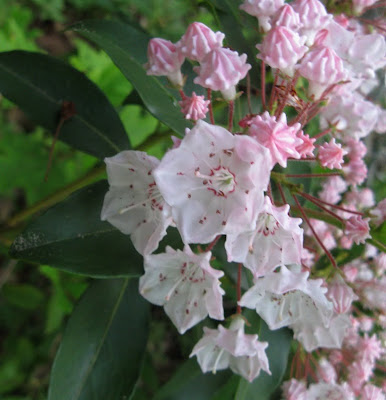 Mountain Laurel is abundant in the area.

I took a quick hike to the summit of Wachusett Mountain on Monday evening, June 13th. The route via the Bolton Pond , Semuhenna, West Side and the Old Indian Trails to the summit, returning by a slightly different route using more of the Old Indian Trail and shaving of a bit of distance. The best birds I heard in route were Louisiana Waterthrush, Dark-eyed Juncos, Hermit Thrushes, Black-throated Green Warblers, B-T Blue Warblers, Indigo Bunting near the ski slopes and a young Red-tailed Hawk calling.
Below are a few photos from the trip, though none of birds: 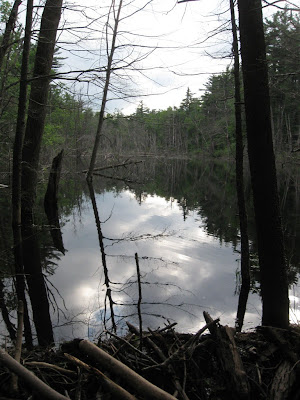 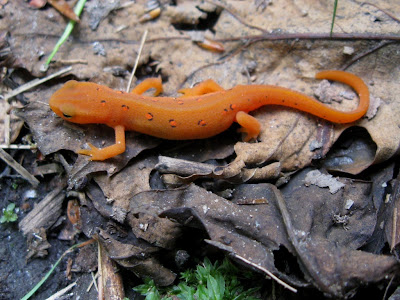 Lucky I saw before I stepped! 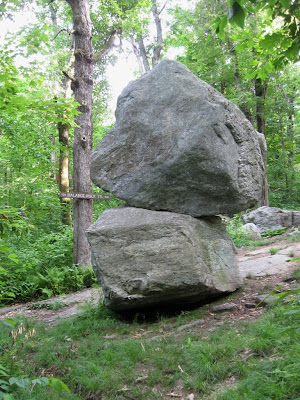 Balance Rock
Some summit shots of the construction site... 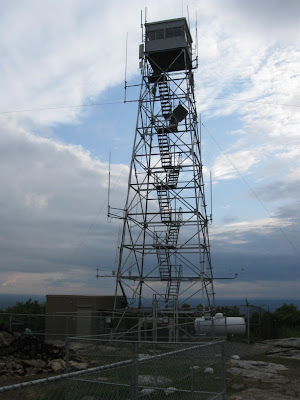 The Old Tower is still standing. 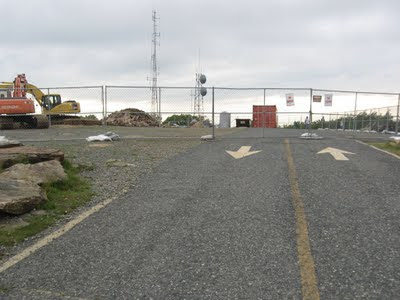 The site is fenced off, but it appears hikers can still enjoy the surround area of the summit and picnic tables too. 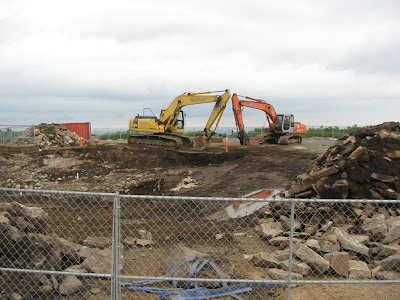 A hole has been installed! 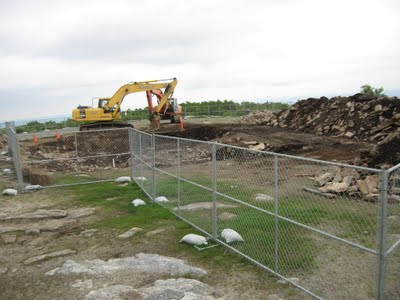 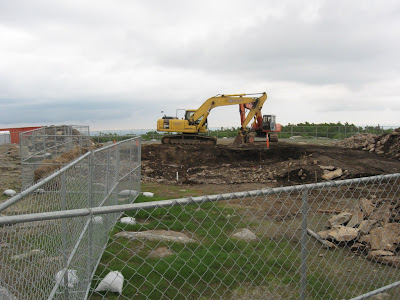 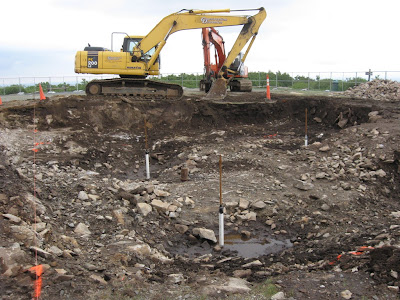 Taken from inbetween the links of the fence. 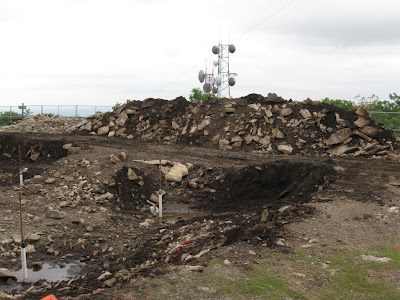 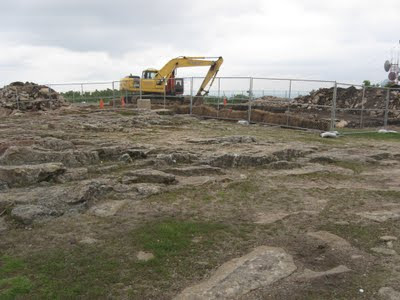 The actual summit, the high point, was still accessable...so a hike is not "compromised"...you can still "touch" the highest point in Worcester County.
Many are looking forward to seeing the project completed and the "new summit"!
Posted by Tom Pirro at 4:37 PM No comments:

Karin and I headed north for some camping and hiking in the Franconia Notch area of New Hampshire's White Mountain National Forest. After setting up camp at Waterest Campground , in Woodstock; we headed out for a modest hike up Mt. Pemigewassett (aka Indian Head). This modest 3.5 mile round trip hike ends on the 2500' summit which affords nice views of Mt. Moosilauke, North Woodstock, the Loon Mtn/Lincoln area (all to the south) and an obstructed view of the Franconia Ridge to the northeast. The cloudy day brightened and we had the summit/ledge area to ourselves for the 45 minutes we stayed atop Indian Head. 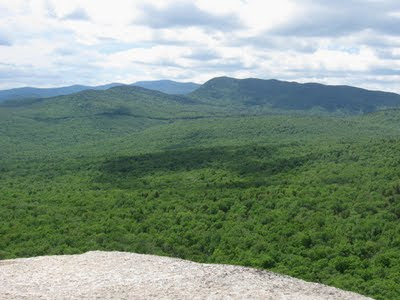 The view southwest toward Mt. Moosilauke just left of center. 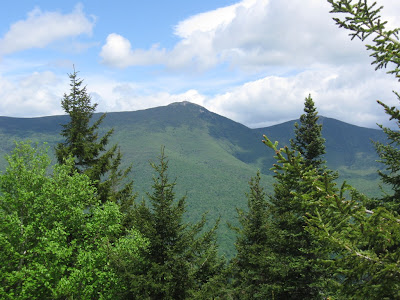 To the east is Mt. Liberty and Flume (obstructed). 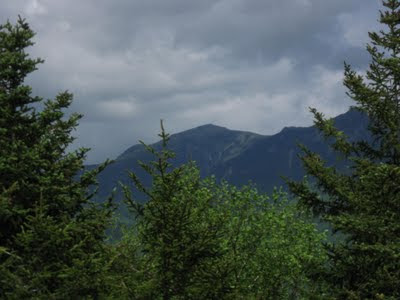 Mt. Lafayette to the northeast. 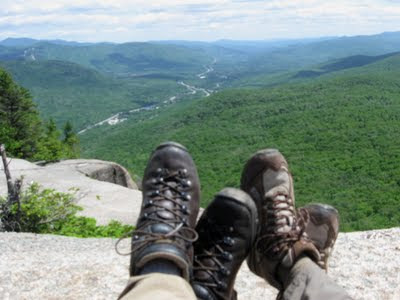 I93, Rte 3 and North Woodstock to the south 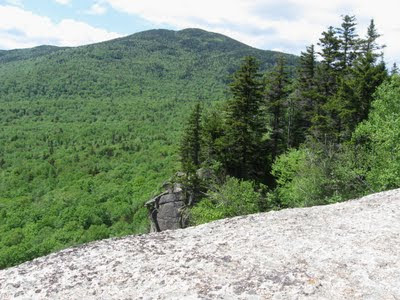 The view west toward the Kinsman Mtns., a Yellow-bellied Flycatcher was calling from the stand of spruces right of center. 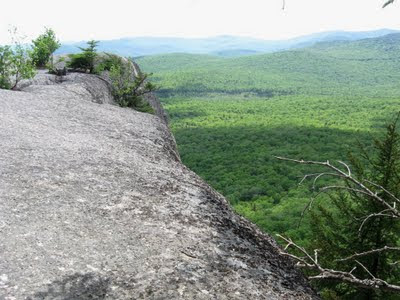 The ledge near the summit.

On Saturday we took a more aggressive hike up Mt. Garfield, standing at 4500' and a 10 mile round trip with 3000' of elevation gain. I'd read and been told this peak has spectacular 360 degree views and the day's weather and visibility appeared to be perfect. As far as birding goes this would be a listening only endeavor. The 3000' gain takes place relatively evenly over the 5 mile one-way hike, along the Gardfield Trail, so the grades were not overly difficult, perfect for the first "major" hike of the season. I heard Winter Wrens, Swainson's Thrushes, and lots of Black-throated Green, B-t Blue, Blackburnian Warblers early on. 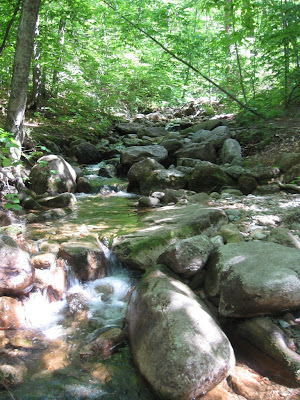 A stream crossing that posed no issue, however the issue was black flies.

Once above 3000' feet Blackpoll Warblers were dominant, a few Boreal Chickadees called out, a single Yellow-bellied Flycatcher, Dark-eyed Juncos and a few Yellow-rumped Warblers were heard. 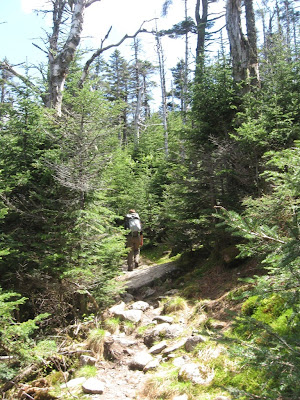 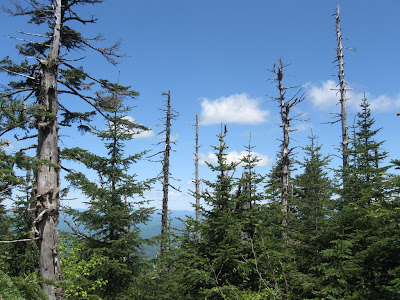 This looked like a good area for Black-backed Woodpecker but none were heard, though we did not linger at all.
Once near the summit the terrain along the Garfield Ridge Trail became steeper but before we knew it, we'd arrived at the summit! While the photos below speak better than words, they don't quite add up to the whole experience! 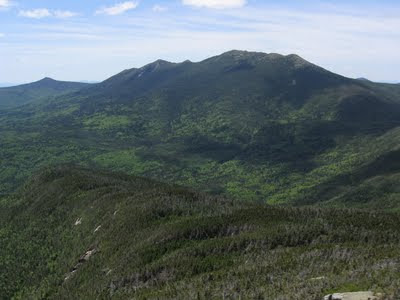 A spectacular view to the Franconia Ridge, Mts. Lafayette, Lincoln and Liberty (far left), from a few hundred feet below the summit I heard a single shrill "veer" call of a Bicknell's Thrush (always a prize). 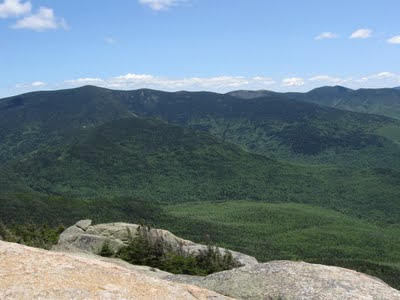 South Twin Mtn (left), Galehead (for ground), the heart of the Pemigewassett Wildness and "the Bonds" to the right. 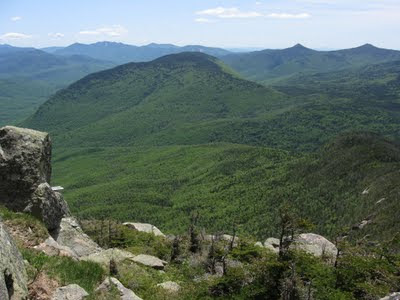 Owl's Head Mtn below center with Flume and Liberty on the right horizon. 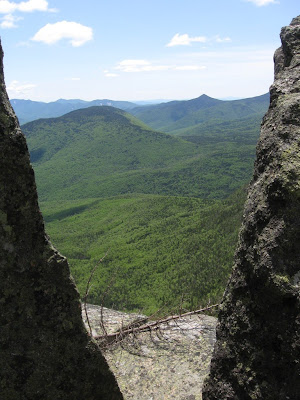 Another shot of Owl's Head and Flume. 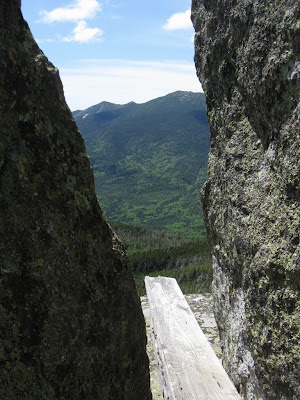 There was once a fire tower on the Garfield Summit, perhaps watchmen caught napping on the job had to "walk the plank"? 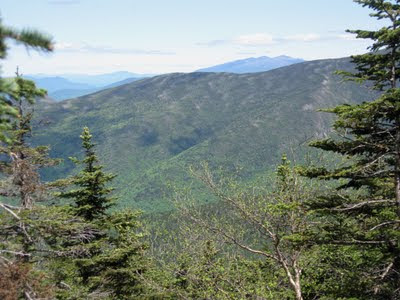 The tiger stripe pattern along the western flank of North Twin was quite remarkable, it appeared to be a pattern of dead and live trees.
I always get a laugh while reading the AMC White Mountain Guide (28th edition), because time after time it mentions views from various points as being "among the best in the White Mountains". Of course there are many spectacular vistas in "The Whites" , from high remote peaks, lower hill tops and road side stops.....and this day Garfield was among the very best!
Posted by Tom Pirro at 9:42 AM No comments: