I stopped by the Keene ariport on way home from Keene, NH today. The rainy weather weather must have grounded a flight of American Kestrels, I saw 12 perch on one section of fence on the north end of the air field. I could see a few more perched on runway lights a few hundred meters from the parking lot. I drove to the south end of the runways and found more Kestels there, the count was 22. Nice to see a good number of this species , which has been (and still is) in serious decline in the past several years!

Another nice sighting was an American Golden Plover that was spooked from the grass by passing aircraft on the runway.

In Templeton, Ma. , I stopped by the Templeton Developement Center and saw a yellow kingbird sized bird perched on the wire. A Western Kingbird would be a great find in North Central Massachusetts, the problem was it was a Scarlet Tanager pretending to be a much rarer kingbird! 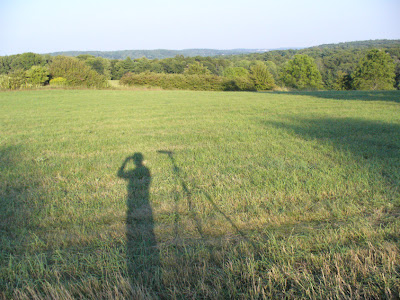 I have continued my sporatic autumn nighthawk coverage on a limited basis, results are fed into the, now expanding, SuAsCo nighthawk migration survey. This season's results from High Ridge are below:
8/12......9
8/14......3
8/21.....11
8/26.....59
8/27....221
8/28.....81
8/29.....91
8/30....50
Season toal 525
Below I have compiled some data from the Furbush Bird Club's annual publication "The Chickadee", of peak annual Common Nighthawk counts going back 25 years. I have also included the peak count from 2007 (to date) from Rick Quimby's Central Massachusetts sightings web site. Keep in mind these are one night high counts as reported to "The Chickadee" editorial committee and NOT season totals, so these maybe of little statistical significance, but I feel worth a look. I have included the year, the date, person(s) reporting the sighting, town location and number reported and the 3 year average. 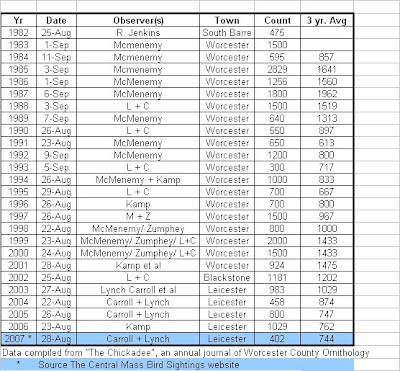 The graph below is of the table listed above with the blue data line the annaul peak count and the pink a 3 year running average. The black data line is a linear trend line of the annual peak count data. 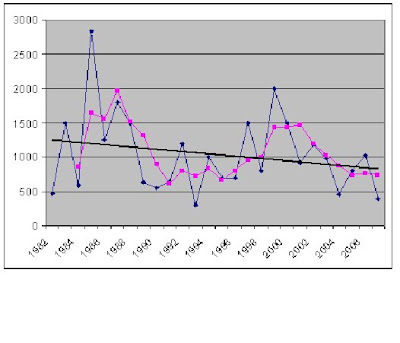