I recently visited two North Central Massachusetts bodies of water to check for Common Loon nesting success, both are reservoirs that belong to the city of Leominster.

Fortunately the Notown pair was in the open and viewable from Palmer Road, though they were on the far side approximately 0.6 mile away. Despite the distance, a single chick could be seen with one of the adults though the scope. Below are a few fuzzy digi-scope shots of the adult and youngster. 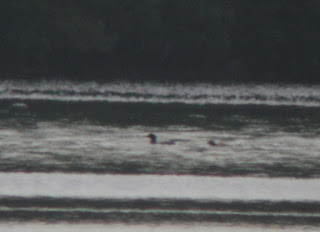 On Haynes Reservoir, where I have seen a pair of adults during the breeding season in past years (but never any young, though previous nesting had been confirmed by others) it was a pleasure to see that pair had a single chick "in tow"! Both adults took turns feeding the chick small fish, one of the adults had leg bands but at a distance of 0.25 mile and harsh lighting the band colors could not determined. Here are a few poor digi-scope shots of the Haynes Res. yougster and one of the adults. The Haynes youngster appeared to be smaller than the Notown chick, indicating a later hatch date.