Last Monday, Karin and I snowshoed up Mt. Watatic, in Ashburnham, Ma., after the recent snow storm dropped about 8-10" on fresh snow on the area. Upon arrival, at the trailhead, there was only one set of snowshoe tracks on the path. This was not a birding "expedition", good thing too.... because only 3 species were encountered. The first was a Snow Bunting, I heard calling as it flew overhead, while I strapped on the "shoes". Otherwise there were only a few Black-capped Chickadees and Juncos, however the scenery more than made up for the lack of bird diversity. 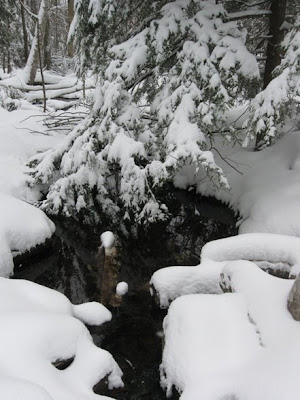 Crossing a stream on the way up, my pace was sluggish but steady. It took us just over an hour to make the summit. 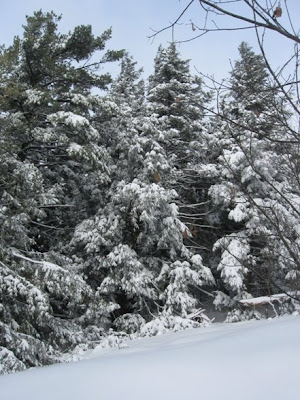 The first open area, a small clearing about 2/3 the way to the summit. 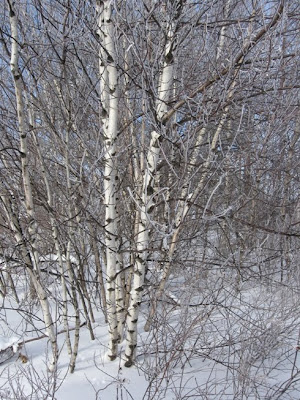 Upon reaching the main summit these handsome birches were looking rather nice in the fresh snow. 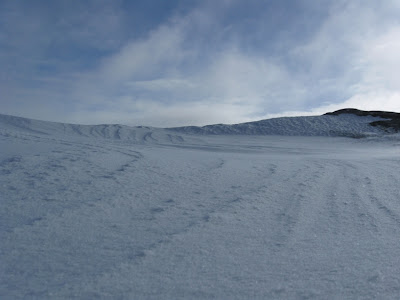 We had been the first to reach the east summit, where the hawkwatch takes place in the fall. 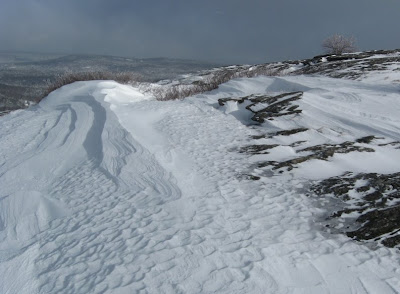 The wind blown snow "patterns" were spectacular and it was nice no foot prints had yet been laid. 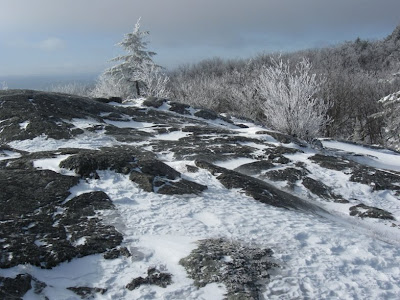 The trees were nicely frosted. 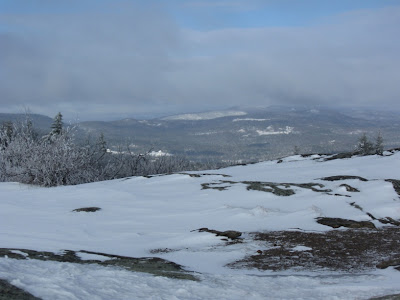 The north west view, toward the Wapack Ridge. 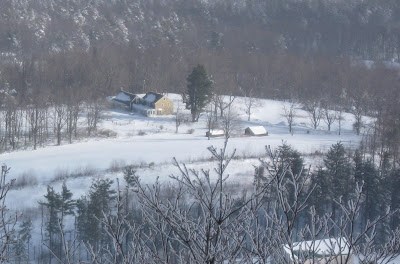 A nearby farm house. 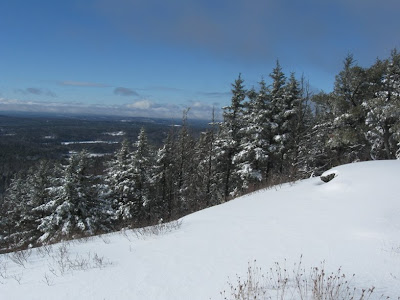 ...and the view from the south vista, where we enjoyed a snack before the return trip over Nutting Hill.
Posted by Tom Pirro at 9:59 PM 2 comments:

Lowell to Lawrence along the Merrimac River 1/9

Saturday, 1/9/2010, I checked out the recently reported Red-headed Woodpeckers, in Tyngsboro, Ma., just outside of Lowell. The juvenile bird was rather cooperative, though at a distance, while the adult did not show until I was about to leave. The juvenile bird's head is begining to develope some red at the base of it's nape, see the digi-scope shot below. 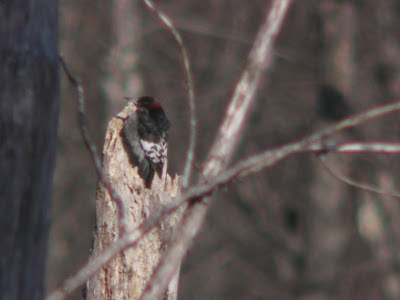 Red-headed Woodpecker showing a bit of red on its nape.
After "taking in" the woodpeckers I decided to bird along the Merrimac River from Lowell to Lawrence. There were plenty of Gulls and Mallards at the UMASS boat house, I soon found out why, as a man showed up toting a rubbish bag of bread. He was soon decended upon by about 200 Rock Pigeons, 50 gulls and a few Mallards. 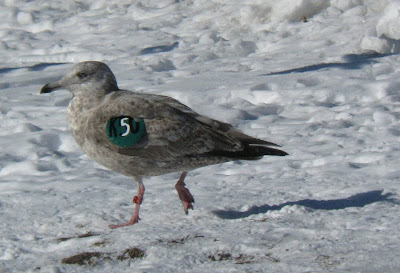 This bird, a 2nd yr. Herring Gull was "chummed in " by "bread man", here is the DRC info on this bird: 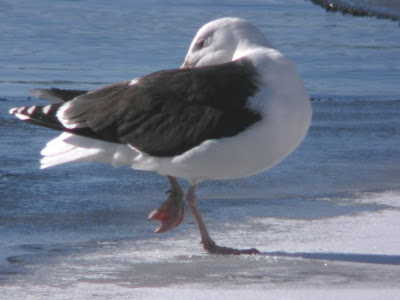 Thats gotta hurt.
I made a few stops, along the river, on my way to Lawrence, at one I found 75 Mallards, a few Black Ducks, 3 Wood Ducks and 125 Common Goldeneyes. I was able to pick out one female goldeneye with a yellow bill and was thinking I'd found aBarrow's, but head and bill shape was more fitting for a Common Goldeneye. From a little research, Common Goldeneye females can have a yellowish looking bill, though rare. Non-the-less an intersting bird, but Barrow's didn't make the check list.
Once in Lawrence, I saw 2 adult Peregrine Falcons near the clock tower, one was "mixing it up" with a Red-tailed Hawk, that might have infrindged upon the falcon's territory. 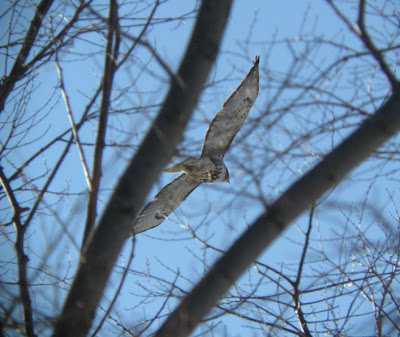 One of 4 Red-tailed Hawks seen near the dam in Lawernce.
I ended the day at the boat ramp in Lawrence, just above the dam, there were many gulls and crows on the ice. I was greeted by a group of domestic ducks as I opened the car door. 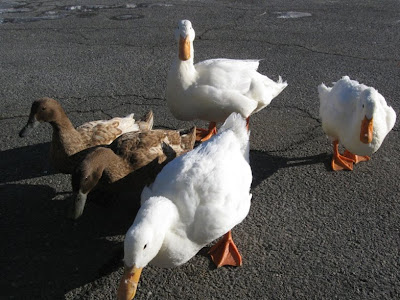 What...insurance salesmen?
A few of the better birds were a Great Cormorant and an adult Iceland Gull, pictured below. It was late in the day, and large numbers of crows were coming to roost in the general area. I was fortunate to hear at least a few Fish Crows. 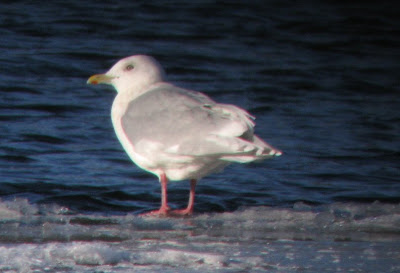 A digi scope shot of an adult Iceland (Kumlien's) Gull.
The Iceland Gull soon disappeared, then an older guy showed up with rubbish bag and began "slinging" bagels. In with the dozens of Ring-billed and few Herring Gulls was a 2nd year Glaucous Gull, which easily out muscled the others. 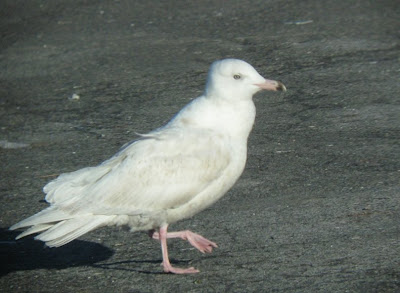 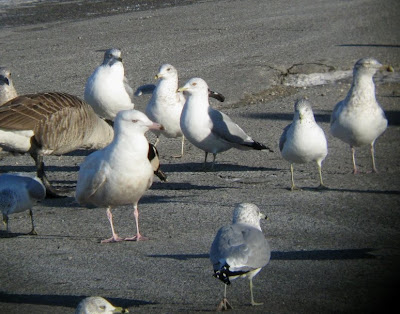 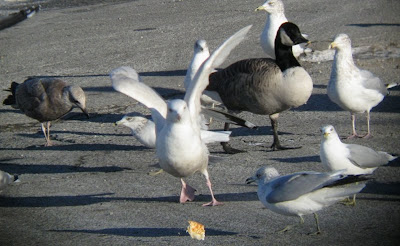 Some one's about to get WUPPED and I know who my money is with. 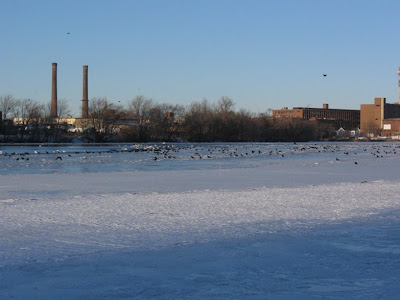 Just a small portion of the crows passing to roost.
The river was lined with crows as far as I could see up river and more were moving along the horizon as I scanned down river. My crude estimate ( and probably on the "light" side, but you get the idea) was about 5,000 , though I recall the late Joe Hogan mentioning numbers from 10,000 to 15,000. Joe had always birded the Lawrence area, keeping an eye on the local Peregrines, the crow roost, passing Nighthawks and of course finding the huge blackbird roost in Methuen...sure wish Joe was still with us.
Posted by Tom Pirro at 7:03 PM 1 comment: