On way home from Keene this afternoon, I stopped to bird the back road of the Keene airport in Swanzey, NH. There I found good numbers Yellow-rumped Warblers, 1 Blackpoll, 1 Palm and a few Common Yellowthroats along with plenty of sparrows. White-throated, Swamp and Song are now moving through the area in numbers. The biggest surprise was an Eastern Screech Owl that responded to my imitation, while I was trying to attract songbirds. At first I expected to find another birder, doing the same as I, but realized the owl's call was coming from a stand of maples in a wetland. It called off and on for about 15 minutes in full day light about 3:30PM.

I decided to bird the Lake Dennison area of Birch Hill Wildlife Management Area, part of my Christmas count territory (Athol CBC), in Winchendon, Ma. and then hit Crystal Lake in Gardner for the gull roost.

While birding the edge of the forest near the Dennison parking area, I heard the whistle of an Osprey. That lead to two surprises:

The first one bad, was a dead Great-horned Owl. Some one had lifted its body onto one the park barbecue grills, the bird's insides were essentially consumed and nothing was left except skin, feathers and bones. Having no plastic bags in the car I left the bird behind, it would be interesting if the cause of death could be determined. 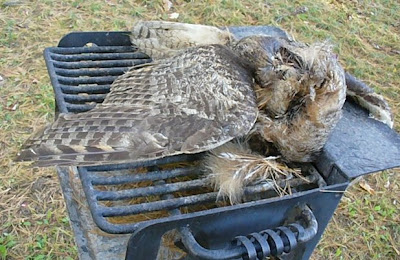 Dead Great-horned Owl
The second was a good: I noticed splashing on the far side of the pond and then saw a cormorant in flight. This bird had a nice white belly, giving the indication it was a Great Cormorant, always a nice find in Worcester County, especially on a small lake. It perched in a dead tree and I thought it worth a walk around the lake to get a closer look and try for a photo or two. The two below were best of several I digi-scoped just as the sun dropped below the horizon. 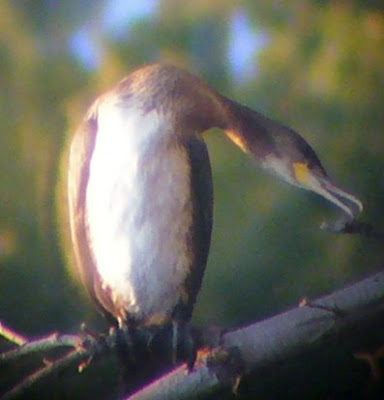 Great Cormorant at Lake Dennison
The Lake Dennison "corm walk" meant I had little light for the gulls in Gardner. I was fortunate the 350+ gulls present were close to the cemetery, making the count and ID's straight forward. Even more fortuitous was the fact a single adult Lesser Black-backed was among 300 Herring, 40 Great Black-backed, 25 Ring-billed Gulls. Last year, several gulls were trapped and tagged with wing markers of various colors, red, orange, black and yellow (if I recall correctly). Last evening while birding in Westminster I saw a Herring pass overhead, headed toward Gardner, with red tags, but I couldn't read the numbers. 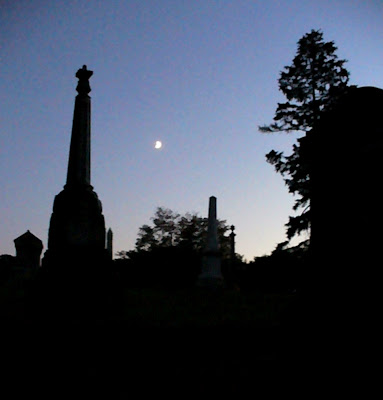