Also notable were a Horned Lark, Winter Wren (calling from the adjacent woods),  and ~10 passing Purple Finches.
Several Yellow-rumped Warblers were in the area,  including one that landed on my head! Ten plus years back a Northern Shrike nearly landed on my head , it did in fact land on my scope (only 3 feet from me!) at same spot , while I was hawkwatching....once again confirming hawkwatching is not exactly an aerobic vocation.

The true highlight was the Eastern Coyote, that was digging at the edge of the field: 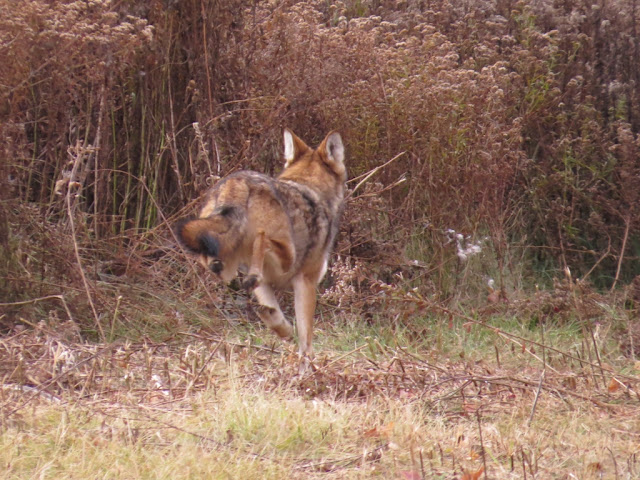 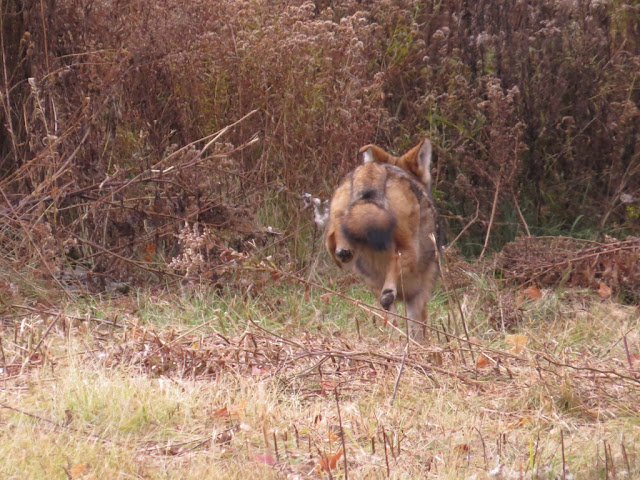 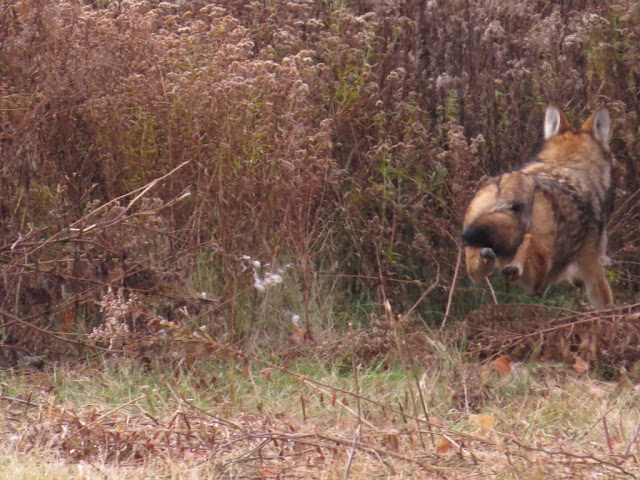 Later a Porcupine showed in the field!

A little over 4 hours of hawkwatching on Mt Watatic brought just under 30 migrant raptors past the site. Leading the way was 16 Sharp-shins followed and a scattering of a single Cooper's, 2 Red-shoulders, 4 Red-tails, 3 Turkey Vultures and a few unidentified raptors. Raptors deemed not to migrating were a few Red-tails and 3 Bald Eagles.
Bald Eagles have become a little more "problematic"to determine if they are migrants or "locals". For example, today 2 immature s pasted the site apparently headed SW only to show up a bit later headed north, hence they were removed for the migrant list, but still a pleasure to observe.

Portions of the "powerline trial" had an impressive carpet of beech, birch and maple foliage, making for a near "red carpet" stroll to the watch site!

The day started with clear skies, however far to the west a cloud bank could be seen approaching. The temperature at home had dropped to about 20 F over night, and had only risen to ~30F just after 10AM, when I arrived on the east summit. That combined with a north west wind at 5-10 made for a little more than crisp fall day.

The clouds rolled in just after noon and snow squalls could be seen approaching from the west.


Season totals for hawkwatch sites such as Mt. Watatic, Wachusett Mtn, Pack Monadnock....and most other watch sites can be found HERE.
Posted by Tom Pirro at 9:03 AM No comments:

Yellow-rumped and Palm Warblers are still fairly common, in the hill towns of Worcester County, and there are certainly still likely numbers of Pine Warblers in the appropriate habitats. Many other warbler species have moved on but in the past few days I did see a Blackpoll Warbler in the yard and a few Common Yellowthroats in my local travels.

Many species of waterfowl have returned on their southbound migration and some joining the local Mallards and Canada Geese. It will not be long before Common Mergansers and Goldeneye will be wide spread. The American Wigeon, below, was a nice find on a small "puddle" of a pond in Templeton, it was consorting with Mallards and Wood Ducks.


Bent's Pond, in South Gardner, is a good spot for waterfowl, herons and sometimes shorebirds (if the water is low). While I was waiting for a train to pass, the crossing in South Gardner, on the 13th I looked over the birds, but there was nothing of note except for few of Mallards. A few swam through the reflections of swamp and sugar maples (on the far shore) which created some nice images.