I was able to make it out to Barton's Cove on the Connecticut River in Gill/Turner's Falls, for the evening gull roost. Arriving at about 5PM, a few people were looking for the bird on Riverview Drive. I scanned a bit, then spoke a bit with the gentleman parked in front of me,the Slaty-backed had not been seen yet. The few people a 150 yards futher down the road appeared to still be "working" the the flock of 500+ gulls and giving the appearance the "target bird" was not in view. Fortunately, more gulls were still trickling in. 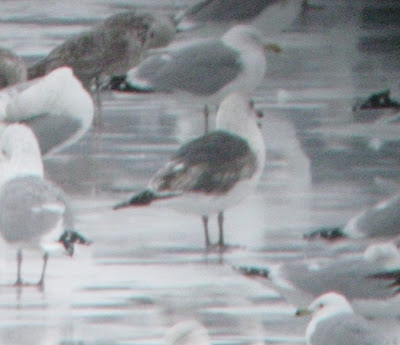 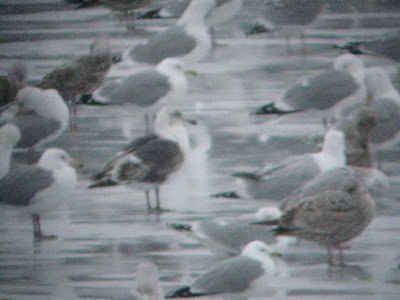 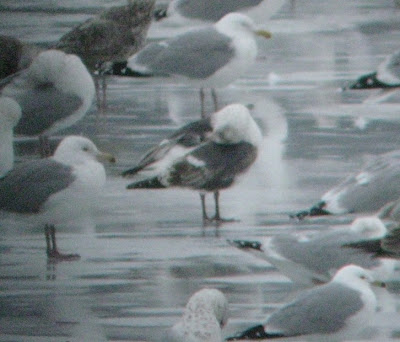 Scanning through the birds I was able to pick out a nice adult Lesser Black-backed Gull and a few first year type Icelands. A moment later "THE" bird popped into view, initially trying to look like a 2nd or 3rd year Lesser Black-backed but had darkish legs and was bulky (not the mor esleek profile of a LBB Gull) appearing larger than the near by Herring Gulls. Mark Fairbrother, a local birder, came by to say hello and concurred this was the bird. For the next half hour all present, birders from Ma./Vt./Ct. and NY(long Island) enjoyed nice views of this bird in a variety of poses.


We also studied a first year Thayer's like Gull a bit, which looked very much like the individual that James Smith found recently and photographed. The whole flock flushed and circled and quickly settled back down, but the Thayer's like bird was lost in the shuffle. Also of note were 13 Ring-billed Gulls with lime green wing tags and one Herring Gull with reddish tag, between studying the Slaty and Thayer's like gulls I neglected to take the tag numbers down.


I had the day off and here are a few digi-bin photos I took of visting feeder birds today. 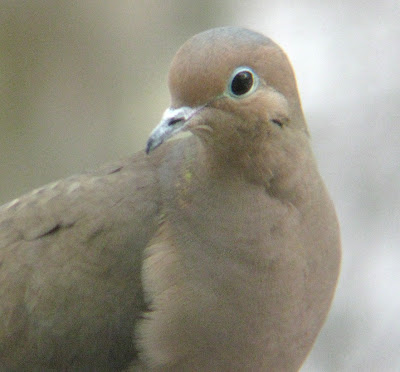 Mouring Dove on the deck rail 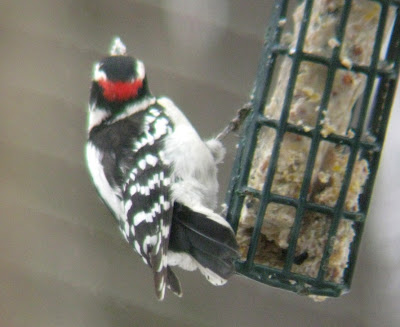 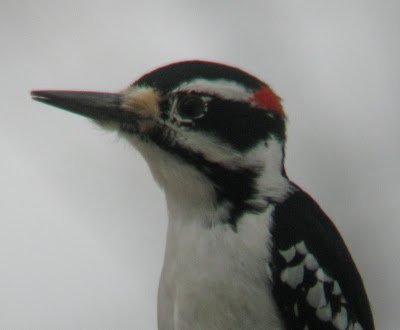 a portion of 128 Wild Turkeys in Templeton, Ma.
With the previous day's report of an immature Slaty-backed Gull, at Barton's Cove on the Conn. River, it seemed prudent to take a morning trip west. I chose the "round-about" route stringing together a series of "north county" stops on way west.

The first stop west the Otter River, which forms the border of Gardner and Templeton, near the Gardner Waste Water Treatment Plant. Only a small number of waterfowl were present when I arrived, Mallards and Black Ducks. A single Red-winged Blackbird was singing beside the river and a male Belted Kingfisher was perched near the WWTP's effluent outlet (which keeps this section of river open through the winter).
Next stop was the Fernald School area on Church and Elliot Hills, in Templeton. Behind the cow barn I counted 128 Wild Turkey's, many "Toms" were displaying to females who seemed to "care less". There were no turkeys at the Elliot Hill cow barn, but 35 Snow Buntings passed over head and a nice adult Red-tailed Hawk was perched on a dead snag. I had also seen a few Red-winged Blackbirds in the general area, a "sure" sign we are only 2 or 3 "good" snow storms away from spring. 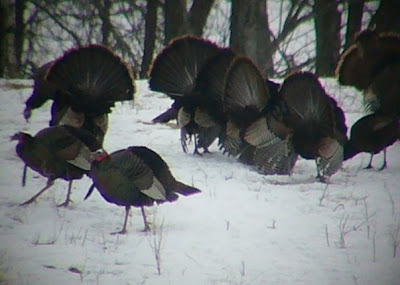 Part of the "fernald Turkey Fest" 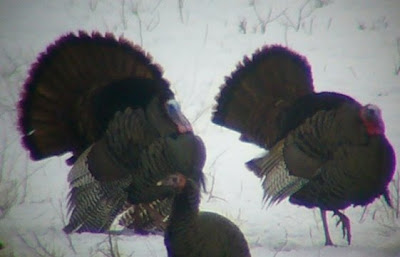 2 impressive looking "Toms" , note the left bird has whitish feather on the lower breast.
Onto Royalston Center, I parked at the library and walked aound the center, which was infested with Blue Jays. Good numbers of American Goldfinches and Pine Siskins could be heard in the tree tops and I was able to pick out at least 2 Common Redpolls in the bunch. I proceeded toward North Fitzwilliam Rd. and heard Evening Grosbeaks calling and found a dozen, a few hundred yards up N. Fitz. Rd.. I could hear the strong drumming of a Pileated Woodpecker from woods and saw another flying past as I returned to my car. 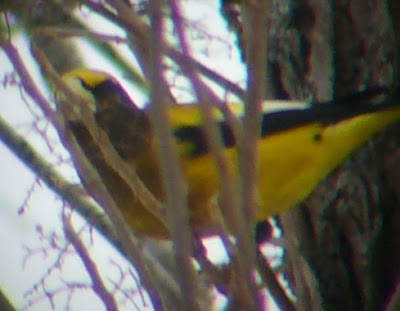 Male Evening Grosbeak
Another 4 Red-wing Blackbirds were visiting a feeder just over the Royalston/Athol town line. I heard a few turkeys gobble off in woods. I spoke briefly with the home owner, who was retreiving the morning paper, he said there are about 30 +/- Wild Turkeys that stop by his feeders from time to time.
At Riverview Drive in Gill, along the Conn. River, there was a 100 gulls on the Barton Cove side, all but a few were Ring-bills. A distant immature Bald Eagle was at the river's edge well up river and the waterfowl numbers and selection was slim.... 3 Ring-necked Ducks, a few Common and Hooded Mergansers and 3 Mute Swans. On the "bridge side " of Riverview were 100+ gulls about 100 Herring, 15 Great Black-backed and a few "Ringers". No white-winged gulls or other fancy species nor any winged tagged gulls.
On the Turners Falls side of the river I notice a large flock of small birds working some birches a the ground acoss the river. All seen within this flock had the dark forehead marking of redpolls, this was a long look and no chance of even considering picking a Hoary out of that flock of 100+/-. While the largest number I've seen in Massachusetts this year, 2 weeks ago Jeff Johnstone and I had a flock of 500 off Krif Road in Keene, NH (first reported by Lance Tanino).
I scoped out Sheila Carrol and Mark Lynch across the river and headed there I hopes they had better fortune with the Slaty-backed Gull. I also ran into Bob and Laura Bieda...neither they nor Carrol and Lynch had any luck. But, Sheila and Mark gave me directions to a field in Greenfield where they'd had 400+ large gulls earlier. I got to the Greenfield location and saw the gulls, after studying for 5 minutes a dog sprinted across the scaring off the gulls, which then landed ~600 yards away. It looked like "woofy" and gulls had played this game before, I was confident the "Slaty" was not in this group so the dog's actions hadn't done me any real harm.
Note: the Slaty-backed Gull was reported on 2/23/09
Posted by Tom Pirro at 1:26 PM No comments: 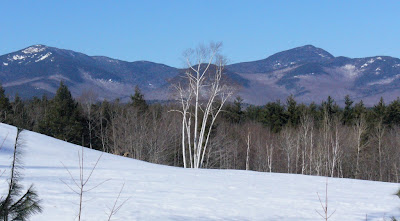 The Sandwich Range, from North Sandwich, the 2 highest peaks are Mt. Whiteface Mtn.( left) and Mt. Passaconaway(right), the lower center in Mt. Wonalancet and I believe Mt. Walden on the far right.

I don't often travel to the New Hampshire Lakes Region, during the winter, but a few good birds seen regularly over the past few weeks seemed worthy of a "chase". A Northern Hawk Owl has been seen nearly daily for the past month in Center Harbor and about 2 weeks ago a few Hoary Redpolls joined a "mob" of Commons, at Tony Vazzano's home in nearby Center Sandwich.

I arrived in Center Harbor at 10AM and the Northern Hawk Owl was easily found right across the street from the Canoe Restaurant, at its perch, in a huge Oak tree about 30 feet from Rte 25. I only stayed a about 20 minutes to watch it, as it just sat tight surveying the area for prey. I figured I best get to Tony's house soon, as he'd said the redpoll activity subsides in the afternoon and I could always return to the Hawk Owl site in the afternoon. 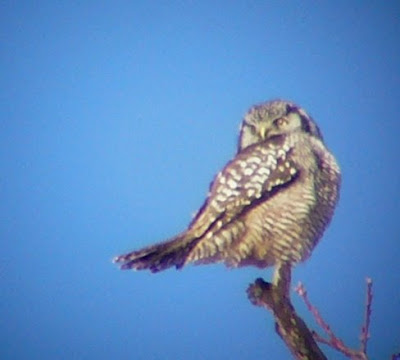 A digi-bin of the "Center Harbor" Northern Hawk Owl

Twenty minutes later, I arrived at Tony's house where I was made to feel very welcomed to view the feeders from inside. He appreciated the bag of thistle seed I brought, because this flock, of up to 300 redpolls, is consuming upwards of 5lbs of thistle a day (at about 2 bucks a pound that translates to approx. $300 per month!). Apparently, I was the 96th person to visit the redpolls and all but 1, to date, had seen at least 1 Hoary, I was liking those odds! I haven't tried to chase down many of this species in the past. Last year at this time there had been many reports of Hoaries, closer to home, but I was busy packing and moving from my house in Gardner.
The "inside" view allowed close range study of a "dizzying" array of Common Redpoll plumages from darkly streaked immatures and females, deep red breasted males and a few brighter "tricky"males. Finally, after about 45 minutes, a nice bright male Hoary showed in a crab apple tree near one of the feeding stations. This "bright frosty" bird had very limited streaking on the flanks, a very stubby bill (looking as if it got punched in), clean under tail coverts and a nearly undetectable amount of pinkish "wash" on the breast. 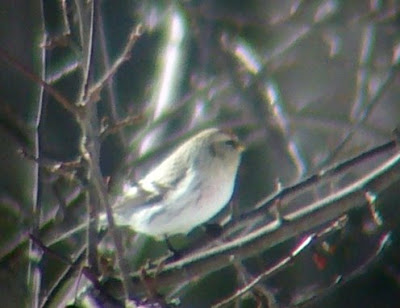 Digi-bin shot of the Hoary Redpoll in poor light
A few minutes later the Lawsons (Bob, Janet and Barrett) came to visit along with Marcella (visiting from Costa Rica and liking beauty of snowy NH), one of them was honored as the 100th visitor. I was not sure what that prize was but they too brought a 5lb bag of Niger seed. Another 30 minutes or so passed and another Hoary showed, quickly ID'd by Tony as a female. She didn't stay very long and nor did the rest of redpoll flock and shortly after we all had to go our separate ways.

After leaving I drove some very scenic back roads to North Sandwich to a location where a flock of Bohemian Waxwings had been present for some time. The were few birds along these roads with the exception of a flock of Wild Turkeys, Blue Jays and a few robins but views of the Sandwich Range and Mount Chocorua were spectacular. Within a minute of leaving the car, near the small apple orchard I could hear at least 1 Bohemian Waxing calling, soon the flock of nearly 300 were in sight. While I have certainly seen my share of this species, it was the first time I had seen them feeding on regular apples. 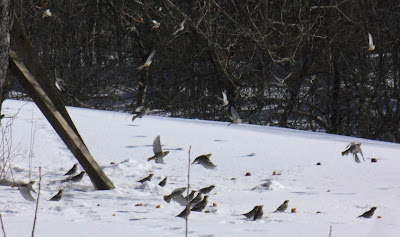 Bohemian Waxwings take flight from eating apples off the snow 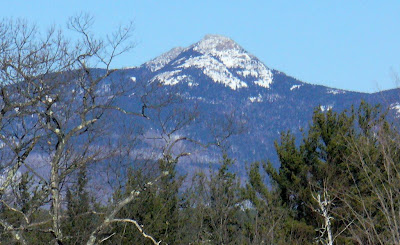 Mt. Chocorua from North Sandwich
On the return trip through Center Harbor I stopped at the Hawk Owl site and it was still at its "assigned work station". I watched it for another 20 minute and was fortunate to see it take a short flight and return to its perch in the oak. 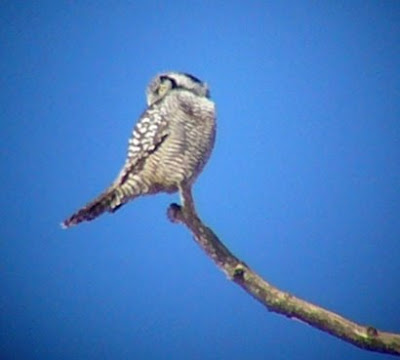