Just after lunch today I was passing Monty Tech High School and decided to check out the goose flock that is typically grazing on the athletic fields. Among the 120 +/- Canada Geese was a single Greater White-fronted Goose. There has been one recently reported from Holden and Rutland, about 15 miles southwest of this locale but its tough to figure if this is the same bird or not. I had not checked this flock in recent weeks despite passing it nearly daily, so its tough to say if its been there for a while or it just arrived.

The geese all went "on full alert" when I arrived but did not flush and then settled a bit while I watched.


A few years back I had seen a Greater White-fronted Goose in Westminster, Vt., but this was a first to Westminster, Ma. and just a bit over a mile from home!
Posted by Tom Pirro at 3:51 PM 1 comment:

This year's Athol CBC would mark the 20th year I have done this count and the 19th I 've done the Baldwinville/Lake Dennison area. The early hours before dawn were calm and good for owling which yielded a single Great-horned Owl. Later, just before dawn, while imitating an Eastern Sscreech Owl's call, off Memorial Street, I was able to hear the double chip-note call of a Winter Wren in the dark. Later during the daylight hours I would see this Winter Wren two more times in the same area again.
While bush-whacking along the Otter River I would be able to get a good count on the Canada Geese and other waterfowl that had roosted the previous night on the river. There was one smaller canada that looked like a Cackling Goose candidate, but it did not have a "frosty looking" back and the bill didn't appear quite stubby enough. Perhaps this was a lesser Canada Goose which breeds well to our north.
The weeds along the river attracted a good number of American Tree and lesser numbers of Song and White-throated Sparrows. Not completely unexpected, but tough to find, was a Swamp Sparrow. Within a small flock of American Goldfinches were a few Common Redpolls and a single White-winged Crossbill was also heard flying high over head.
The day was off to a great start with 31 species by 8:30am, which is equal to the daily average since I have been doing this section of the count. The only "easy" species missing was Mourning Dove!
Jillian, a state biologist, would joined me at 8:30, and we'd walk most of the streets of Baldwinville (north of the Otter River) and a portion of the Lake Dennison/ Birch Hill area during the early afternoon. With the weather being so nice, few birds were driven to feeding stations, but we found plenty of Dark-eyed Juncos, Northern Cardinals, House Sparrows and other common feeder birds. A nice surprise was an adult Chipping Sparrow sunning itself in shurbs, this was only a street away from were I had seen one (an immature) during last year's count. While "chippies" are very common in the warmer months they are very uncommon between November and April, perhaps this was the same individual as last year.
Most notable and really the hilight of the day was a large flock of Common Ravens, a minimum of 22 (seen at once), just before this group came into sight 14 had passed, however it was tough to determine if the 2nd we new birds or not. Up in the Lake Dennison area chickadees and nuthatches were either not as plentiful as usual or just not responding to spishing and screech owl imitations. While those species seemed low in number we did pick a male Belted Kingfisher (the 2nd of the day) and 2 Common Mergansers (same place I'd seen two during last year's count.
After birding the Lake Dennison area I returned to Baldwinville to attempt to add a few more species to the day list. I'd hear the sweet calls of a single Pine Grosbeak from the top of a tall conifer, the crab apple trees in this area where lacking fruit and I didn't expect to find many in my area of the count, so this bird was a nice surprise. Late in the afternoon two Purple Finches put in a brief appearance. A single Common Redpoll was feeding with a small group of House Fiches low in the some weeds, I would only see a few of these over the course of the day despite the fact there seemed plenty of weed-seed along the Otter River.

As the day closed the usually "easy to find" Mourning Dove had yet to be make it on the list, typically each year there is usually one or two common bird species that nearly go undetected. One year I missed House Sparrow and another year I managed to "catch" a flock of European Starlings flying to roost at sunset. This year the Mourning Dove would slip off the list of species I had never missed on this section of the count!

To date this fall has been one of the best winter finch incursions that I recall, by December 1st I have seen all the winter finch species one can expect in Central Massachusetts. The only missing species, from my list, is the rare (and problematic to ID) Hoary Redpoll.

Evening Grosbeaks that were once wide spread and abundant in the area during late fall and winter are now difficult to find as their numbers have declined as dramatically as they had increased some 60 years ago. I have heard only one this fall.

Over the past few days I have seen Pine Grosbeaks in a number of locations including Westminster, Lunenburg and Gardner (3 locations) and so far all have been female or immature birds, which is fairly typical. These large and tame winter finches are typically an easy target for photo seekers and I have included a few digi-scope and digi-bin photos below.

My understanding is Pine Grosbeaks target the fruit seeds and often their bills will be covered with fruit pulp, such as the bird below.

...and a few few photos of more common species.

During an enjoyable morning walk at High Ridge WMA in Westmnster, Ma. this morning, an immature Northern Shrike put on a nice show just inside the Overlook Road Gate. I was able to capture a few photos with a Canon A590 through my Zeiss 8 X 42 FL binocular.  This bird showed nicely as it foraged the edge of a field, appearing to snag an insect here and there. 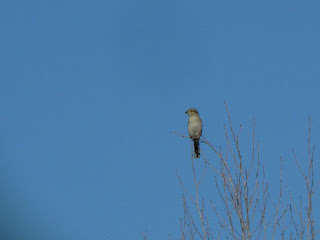 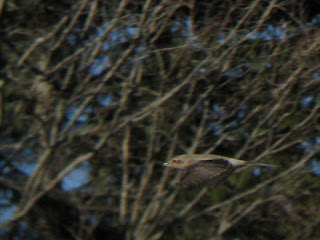 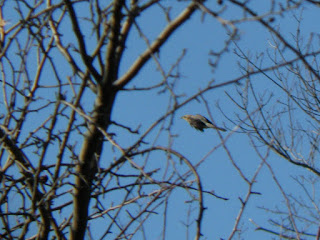 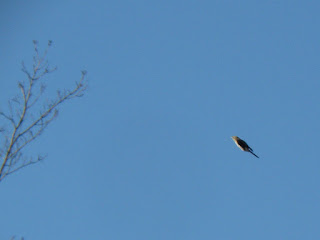 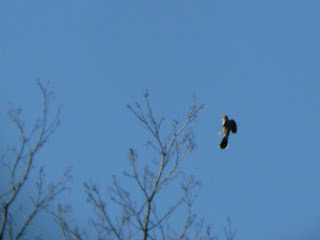 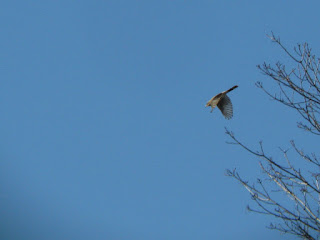 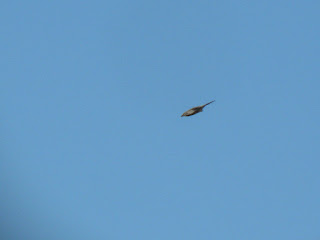 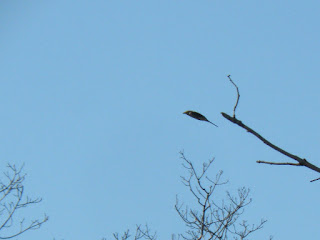 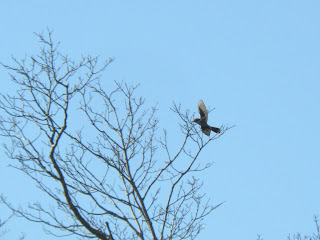 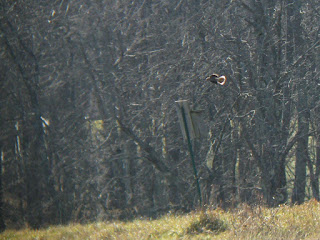 Other avian hilighs included Easten Bluebird, Common Redpoll 1 at High Ridge and 13 near Round Meadow Pond. Also, I spoke with a man walking his dog and child who'd seen 7 or 8 Pine Grosbeaks in Gardner the day before.
Posted by Tom Pirro at 6:25 PM No comments:

Saturday I trekked along the east side of the Quabbin watershed, beginning at Gate 37 then traveled through the former township of Dana, Massachusetts. The goal was to visit the Indian Kitchen on the east side of Pottapoug Hill, the jet crash site, and try to find the grave of Wendell Farnsworth (reputed to be the only known grave that was not relocated during the building of Quabbin). Also on the list, was to walk the east shoreline between the inlet of West Fever Brook and Grave's Landing to look for any lingering shorebirds and anything else I should happen upon.
﻿
﻿﻿﻿ With a good deal of mixed conifer/deciduous forest in this area, I hoped to see or hear some winter finches such as crossbills and siskins. Groups of Black-capped Chickadees were evident, including  typical followers like White-breasted Nuthatches, Brown Creepers, Downy and Hairy Woodpeckers and "strong" numbers of Red-breasted Nuthatches.
﻿ The water level has been quite low this year, so my plan was to walk the shoreline until I passed Grave's Landing with some zigging and zagging into and out of the forest from time to time.

﻿ I'd only see one Bald Eagle for the day, an immature standing on an island bar. A family of river otters was swimming together and catching fish, often when one surfaced it could be seen "crunching" on small fish like potatoe chips. Being late in the year for shorebirds, it was not surpising I only saw 4, one was a Greater Yellowlegs flushed from a small cove and the others were on a "island bar" too far to conclusively ID, but may have been Pectoral Sandpipers.
Exporing the water's edge was a real treat in such mild weather and I would have this section to myself!


There was limited waterfowl, but decent variety such as Common Merganser 4, Red-breasted Mergaser 1 female, a few Buffleheads, White-winged Scoter 1 female, Mallards and American Black Ducks. Of course Common Loons were present and their ethereal calls were occassionaly heard.


Soon after reaching Grave's Landing a flock of 9 White-winged Crossbills flew over head, close enough to pick out a few colorful males.
After walking a 1/3 mile or so beyond Grave's Landing I cut back inland to a main road then cut across a secondary road (with lots of toppled trees) toward the Pottapoug Hill area, on the ledgy east side of the hill is a rock over hang known as the Indian Kitchen.

While walking the roads, its enoyable to look at the stone walls and imagine when the area consisted of agricultural fields, pastures and farm houses.
Not far from Skinner Hill Road a flock of approximately 20 Red Croosbills flew over head, their noticable jup..jup calls were heard, unfortunately they kept on moving. Though no Pileated Woodpeckers were detected during the morning eventually one sounded off from deep in the woods, 4 more would be seen and/or heard by the day's end.

While taking the above photo, I heard or rather sensed something nearby, upon looking to my right I saw a handsome porcupine only 10 feet away. In typical porcupine fashion it "sat tight" while I inspected and photographed it, being well amored they have little need for quick foot speed (unfortunately their not well adapted for crossing busy roads and highways).
On the home stretch to Gate 37 a Barred owl flew across the road, and fortuitously landed and allowed a photo, a poor one at that, before slipping into the deep forest.
A complete list of birds