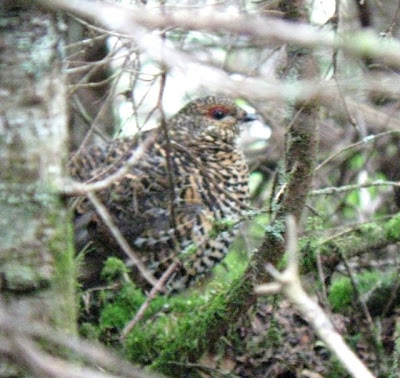 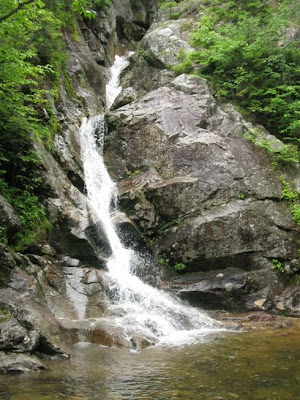 Gibbs Falls, about a mile from the trail head.
Most birding consisted of listening along the trials and stopping occasionally to look. I checked out a drumming woodpecker that turned out to be a Hairy, had been hoping for Black-backed. I tried to spish in a Bicknell's Thrush above the Mizpah Hut, near the Mt. pierce Summit. Two Bicknells' called, one on each side of the trail, at an elevation of about 4100', but neither came into view, I heard another, later, in the "saddle" between Pierce and Eisenhower. 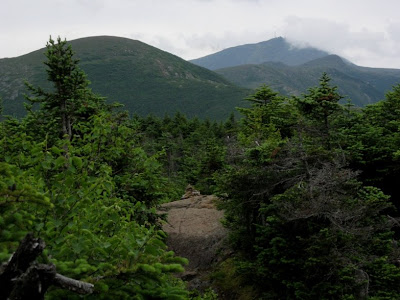 Mount Eisenhower (left) and Washington in passing clouds (Right), Mt Monroe is the highest point ,below the light cloud, to the right of Washington. Taken from near the Mt. Pierce Summit.
The best "people" sighting of the day, while I was trying to spish in the "Bickies", was two male hikers, I guessed to be in their early twenties. They were heading north, soon to be above tree line with rain expected later, and seemed to be a little "short" on gear.... their pre-hike check list must have gone like this:
sneaker's.....check
shorts..........check
tee shirt......check
backpack..... too heavy dude
water........... waaaay too heavy dude
foul weather gear....naugh its summer dude
Fifth bottle of Jack Daniel's.....make it TWO.......CHECK!

Ok DUUUDE...lets hit the trail!
I kid you not, that's all they had! Each was carrying a full bottle of "Jack", nothing else..well maybe a little weed in their pockets (that's plenty light!). Not what the US Forest Service and AMC had in mind for hiking the "Whites" above tree line", even in summer. *** more comments below. 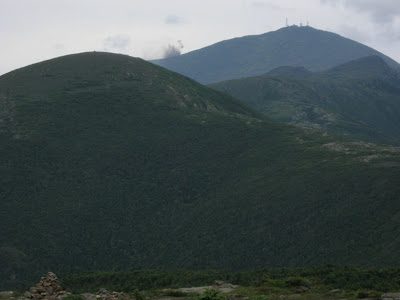 Eisenhower, Washington and Monroe, the plume on the left flank of Washington is from the Cog Railroad chugging to the summit. My folks took me on that back in the early 1970's.
I had hoped for a Spruce Grouse sighting, while they are regulars up here it can be a long shot that one might be along side of the trail. I found what appeared to be droppings where I heard the 2 Bicknell's (and "hiker dudes") and then had the good fortune of seeing one along the Crawford Path not too far from Pierce, at 4050' according to my GPS. This bird remained close and tame, in typical Spruce Grouse fashion. 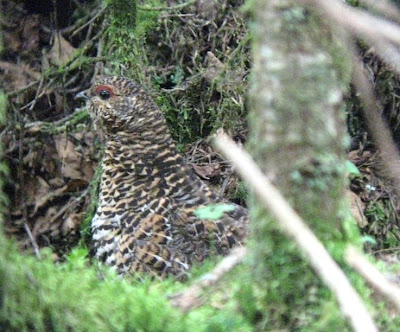 Another shot of the Spruce Grouse. (GPS coordinates of N 44 13.867 W 071 21.549)
The hike to Eisenhower went smoothly most bird activity above tree line were Juncos and White-throated Sparrows, both seen carrying food. With fairly calm conditions, I was able to hear bird song from the ravines below, most notable being Winter Wren, Swainson's Thrush and a previously mentioned Bicknell's Thrush.
I lingered atop Eisenhower for a bit and enjoyed the views.... 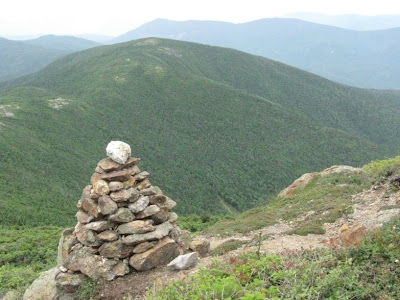 Mount Pierce from the approach to Eisenhower. 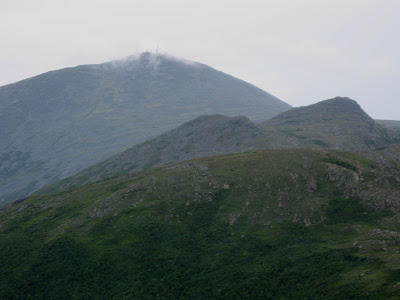 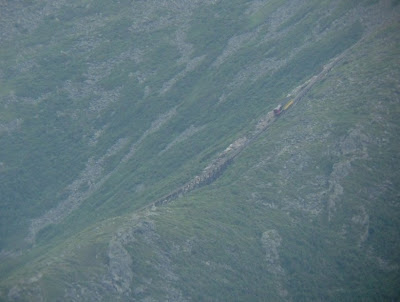 A digi-bin shot of the Cog Railroad, making the steep climb. 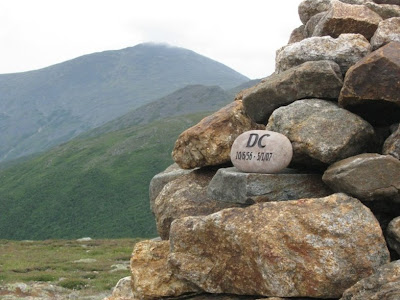 A memorial on the summit cairn of Eisenhower. 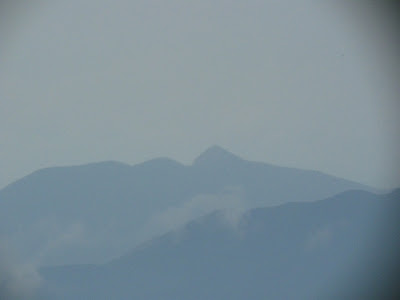 A digi-bin shot of Mount Chocorua.
The return hike went well other than some typical aches and pains.

The bird list:
Species....Number reported
Spruce Grouse....1
Hairy Woodpecker....1
Blue-headed Vireo....5
Gray Jay....2
American Crow....2
Red-breasted Nuthatch....1
Winter Wren....18
Golden-crowned Kinglet....8
Ruby-crowned Kinglet....1
Bicknell's Thrush....3
Swainson's Thrush....24
Cedar Waxwing....7
Nashville Warbler....1
Northern Parula....2
Magnolia Warbler....1
Black-throated Blue Warbler....2
Yellow-rumped Warbler (Myrtle)....2
Black-throated Green Warbler....7
Blackburnian Warbler....1
Blackpoll Warbler....11
White-throated Sparrow....10
Dark-eyed Junco (Slate-colored)....18
*** My take on the 2 ill prepared hikers, was they probably did not hike up from a trail head, but MAY have worked at one of the AMC Huts and could have been transporting the "contra-ban" from the Mizpah Hut to Lake of the Clouds Hut. This would be about a 7 mile hike, a "walk in the park" for these guys who typically have to carry heavy packs of food to the huts a few time a week. Pure speculation on my part...non the less the sighting was quite amusing....but, while I found it amusing.........A $25,000 fee has been imposed upon a young hiker whom had to be rescued in the White Mountains this past winter. The state felt he had been negligent and deemed he should pay the cost of his rescue.
Posted by Tom Pirro at 12:06 AM 4 comments:

A friend and I hiked Mt. Chorcorua in the southern portion of the White Mountains of New Hampshire back on 7/5. The weather was cooperative and we had a great day to hike one of the most climbed summits of the White Mountains. We chose to hike the Champney Falls Trail, from the Kancamagus Highway, for 3.2 miles which then joins the Piper trail 0.6 miles from the summit. This was 7.6 mile round trip with an elevation gain of about 2250 feet. 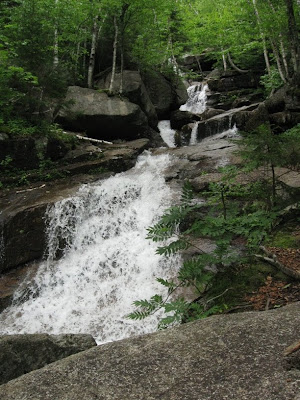 Champney Falls Brook along the "loop trail" on the way to the summit.
By White Mountain standards this would be considered a moderate hike, but seemed more rigorous than the recent Mt. Greylock hike we had taken. 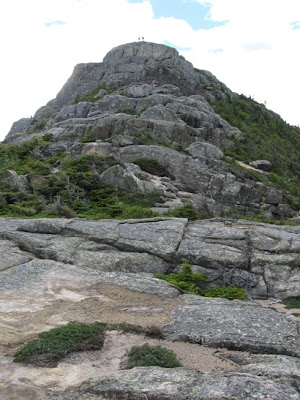 We saw only a few other hikers on the way up, but once we reached the Piper Trail, were a few other trails merged, we saw several more. Several had dogs with them, and most appeared to be well behaved and under control. Once on the summit it was easy to see why its so heavily hiked, as the views were very impressive, the Lakes Region of NH to the south, White Mountain peaks to nearly all around, the Pleasant Mountain Range to the east (in Maine) and many nearby Lakes. Despite being a clear day, not too surprisingly, the higher Presidential peaks were surrounded by heavy cloud cover. 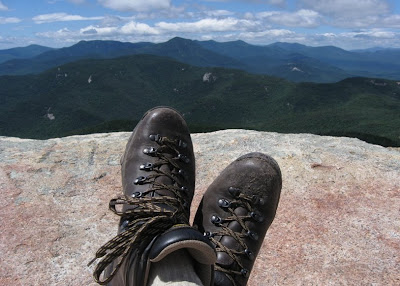 Easy to see why this is such a popular hike, this was the view to the west. 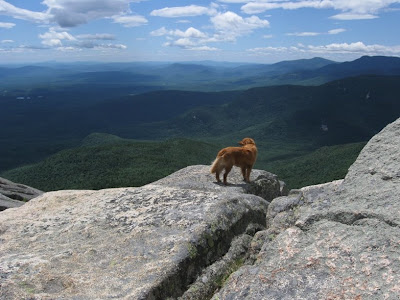 This "Goldie" was a bundle of energy bolting every which way, it must have covered 20 miles during its round trip. This dog was with a very intersting family, all the girls and mother wore skirts with pants underneath, one of the girls had polka dot shirt, plaid pants and striped shirt.

I birded by ear and bird song was limited on the way up, beginning at 10:30AM. What I found odd was missing Blackpoll Warbler on the way up and only hearing 1 Swainson's Thrush, each of these species were much more vocal on the way down in the afternoon.
The bird list:
Species....Number reported
Turkey Vulture....1
Blue-headed Vireo....1
Red-eyed Vireo....5
Blue Jay....3
Winter Wren....8
Golden-crowned Kinglet....2
Swainson's Thrush....8
Hermit Thrush....2
Black-throated Blue Warbler....8
Yellow-rumped Warbler (Myrtle)...5
Black-throated Green Warbler....6
Blackburnian Warbler....1
Blackpoll Warbler....5
Black-and-white Warbler....1
American Redstart....1
Ovenbird....6
White-throated Sparrow....3
Dark-eyed Junco (Slate-colored)....5
Purple Finch.....2
Posted by Tom Pirro at 11:23 AM No comments: