I started Sunday's hike from the Kancamagus Highway, taking the Pine Bend Trail to the Tripyramid Loop trail to North and Middle Tripyramid. Then I reversed direction to the "saddle" between "Middle and North" were the the Sabbath Day Trail lead back to the Kangamagus Highway, where I walked west back to may car, completing an 11 mile loop. 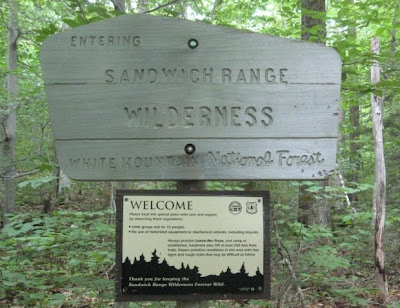 The trail started off fairly level and smooth, with some mud and a few stream crossings, for the first few miles, but allowing for a nice "stride". After a few miles the gradient increases and then becomes steep and rugged where the elevation increases 1000+ feet in about a 1/2 mile. A crew of 6 young men and women were conducting train maintenance, in one of the steeper sections, to help prevent erosion along the trail. Their tools consisted of long iron bars for leverage, pick axes, shovels and a heavy-duty winch...nothing I'd care to have strapped to my back on a hike this. They had a camp setup near by and stay for 5 day "shifts", then have 1 off...and repeat. The recent wet weather trends have made their jobs an even greater challenge (the technical term used was "sucked") than usual. 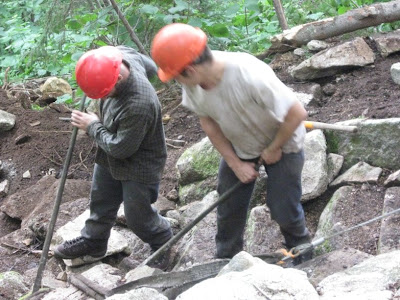 These guys were repositioning a large rock, rugged work....the job description: "hike long distances, with iron tools, into the mountains and move large rocks". Hats off to these guys and young lady!. 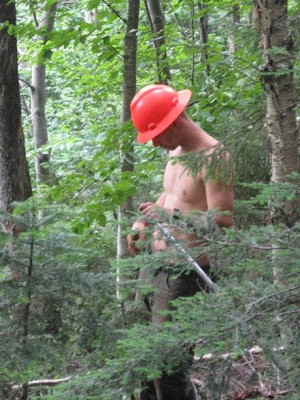 This guy was in charge of the winch 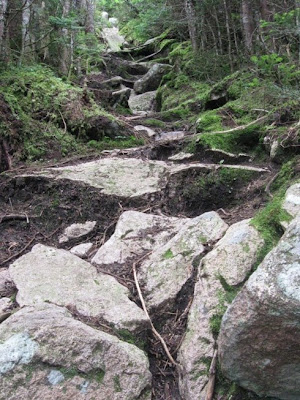 Lots of steep rocky trail once the first few miles were complete.
All along the trail bird song was nearly completely void, I heard 1 Hermit Thrush, 1 Blue-headed Vireo and a few Junco's. Nearly all the birds I recorded were spished in. When comparing a few "key" species between this hike and the Pierce/Eisenhower hike of 7/21 its easy to see the breeding season is all but wrapped up. I was pleased to spish in a Boreal Chickadee before reaching the "north" summit and I had a few more at the junction of the Tripyramid Loop/ Sabbath Day trails. 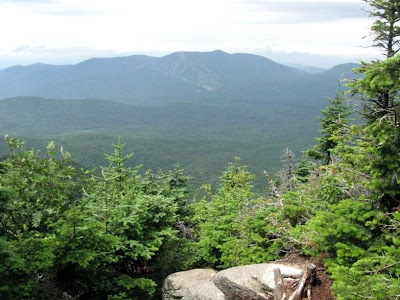 Waterville Valley Ski Area on Mt. Tecumseh from North Tripyramid
The few hikers I saw and spoke with had come in from the Waterville Valley side (the more popular route from what gather), taking the Livermore trail, to the Tripyramid Loop trail. This approach brings one over the North Slide, which offer great views but is very steep and potentially dangerous in wet weather. 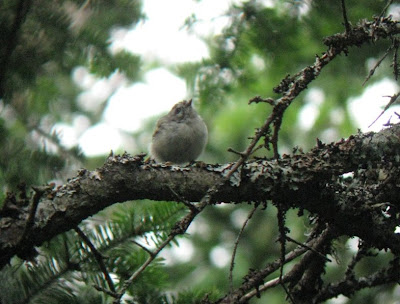 A Golden-crowned Kinglet, not singing but quite vocal with call notes. 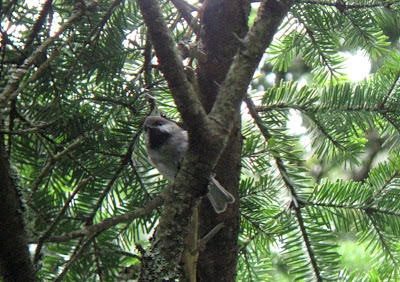 Boreal Chickadee
There were a few steep sections on the hike down, along upper section of The Sabbath Day Trail. Trekking poles were stowed (to free the hands) and the binoculars were tucked into the pack (for safe keeping, no sense in using the Zeiss for an airbag). 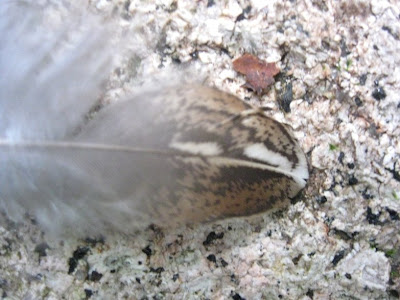 Spruce grouse feather ? I found it at about 3000' in Balsam Fir.
The trail crosses the stream no less than 3 times (the AMC book says 3, but I crossed 5 times...I must have goofed) in a very short stretch, just before reaching Sabbath Day Falls. With the high water levels the crossings were made with care, the trekking poles had to be "redeployed". Once near Sabbath Days Falls, the rain started and there were only a few tourists enjoying the falls. 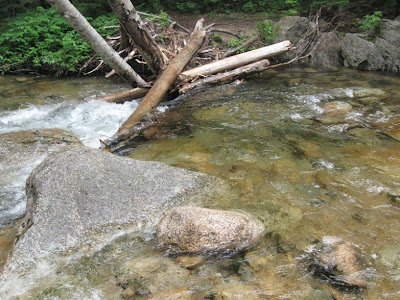 That log was the bridge across, one of the easier of the last few crossings.
After a mile along "the Kanc" I was back to the car and ready for a post hike ice cream shake, once I was underway in the car the skies opened...perfect timing.
The bird list for the hike:
Species....Number reported
Blue-headed Vireo....1
Red-eyed Vireo....1
Blue Jay....1
Black-capped Chickadee....5
Boreal Chickadee....4
Red-breasted Nuthatch....3
Brown Creeper....2
Golden-crowned Kinglet....16
Swainson's Thrush....1
Hermit Thrush....2
Cedar Waxwing....10
Magnolia Warbler....4
Black-throated Blue Warbler....1
Yellow-rumped Warbler (Myrtle)....3
Black-throated Green Warbler....1
American Redstart....5
Ovenbird....1
Dark-eyed Junco (Slate-colored).....20 (several Juveniles)
Posted by Tom Pirro at 12:42 PM 4 comments:

Chuck Caron and I visited the Gonet Drive Mississippi Kite nest site in Newmarket, New Hampshire this morning 8/1/2009. Amazingly, two pairs of the Mississippi Kites nested for the 2nd consectutive year in Newmarket. The Main Street nest apparently was a failure this year and one chick had recently been reported at the Gonet site.

Earlier in the morning we bumped into Len Medlock in Seabrook, he had proclaimed the birds a Guarantee! These types of statements often times can spell disaster, a certain jinx, then you may have to listen to others say "ya shoulda been here yesterday...last week...etc. Fortunately for us, Len's good word held true to form and we enjoyed spectacular looks at 2 adults and the single chick in the nest......a fine "showing". 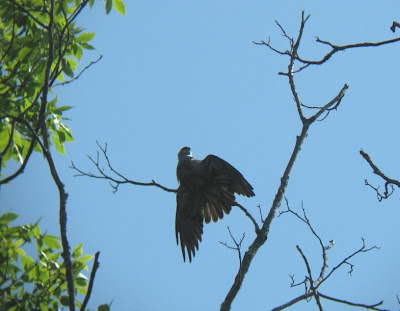 Shortly after our arrival an adult (this appears to be a female) was spotted by Chuck, it perched near the car and began sunning itself. 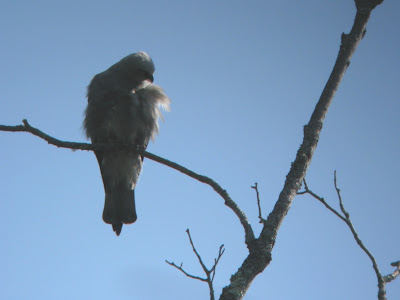 It remained in place for several minutes... 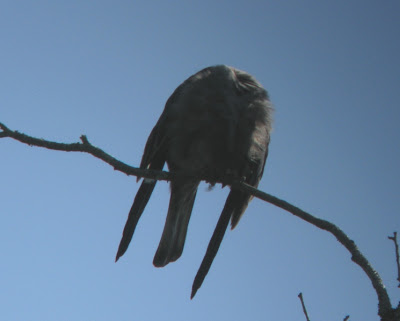 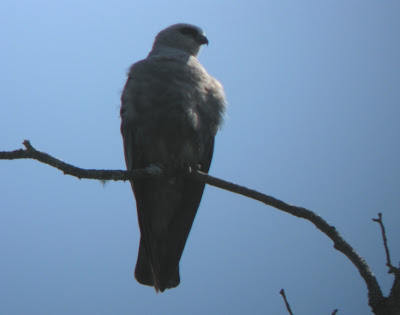 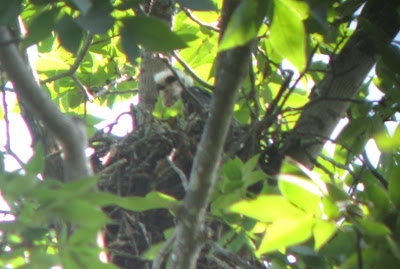 Afterwards we managed nice looks at the youngster. 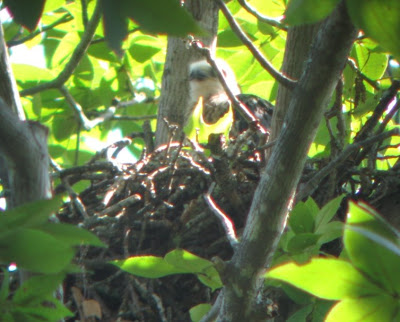 Which appears to be growing nicely and hopefully will fledge within a few weeks...if I recall correctly the big numbers of migrants pass through Texas later in August...perhaps these northern breeders will be "bringing up the rear". 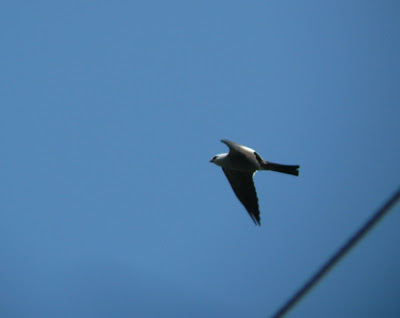 We enjoyed watching at least 2 adults (the one above an apparent male) in flight, catching dragonflys returning to the nest to feed the chick perhaps a dozen times. 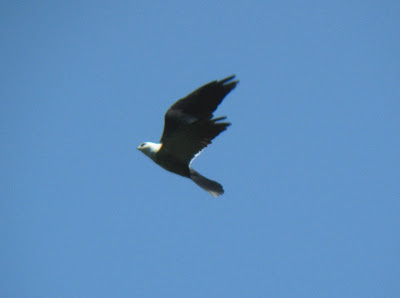 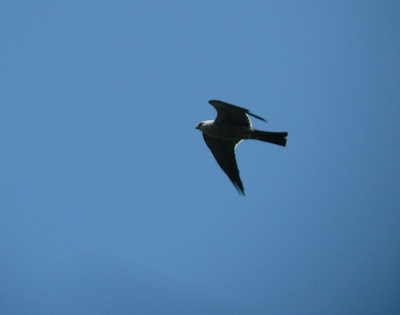 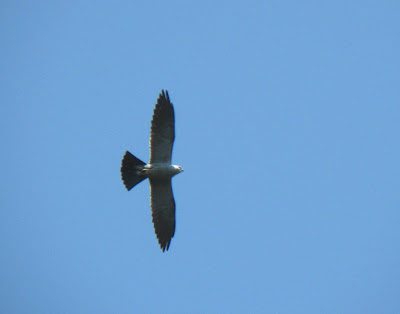 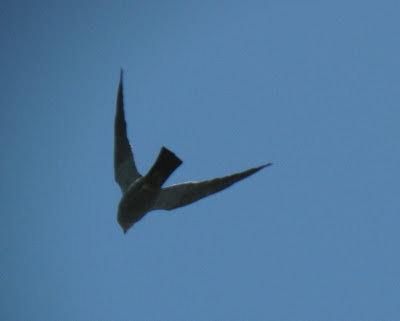 Last year I made the trip to the Main Street site and had arrived just before dusk and "only" got to the part of an adult incubating eggs. A few other raptors seen from this location was 2 Ospreys and an adult Bald Eagle.