I was heading up to Maine to visit friends, last Sunday 3/22, and birded Ipswich, West Newbury and Plum Island, hoping to see either the Ipswich or the West Newbury Ross' Geese. Upon arriving the Ipswich locale (at 11:30 AM), Aguila Road, birders said the geese were tucked behind a knoll and out of sight. Birders said there was "white geese" in the mix but they seemed uncertain if the Ross' were present.

While driving around the bend in the road for another vantage point, the geese took flight. I was able to quickly park and get on the birds, seeing several "white" geese mixed in with ~120 Canadas. The seven small Ross' Geese were indeed present in the mix, but kept heading east and dropped out of sight....hardly a quality look!

I arrived at the West Newbury location just before 1PM and no geese were present in the fields (Kimball Farm), just up hill from the Rock's Village Bridge. However, several hundred Canadas were on the Merrimac River and low and behold the two Ross' Geese were with them and very close to the road!! 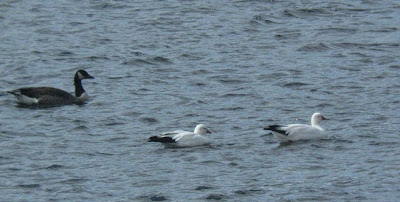 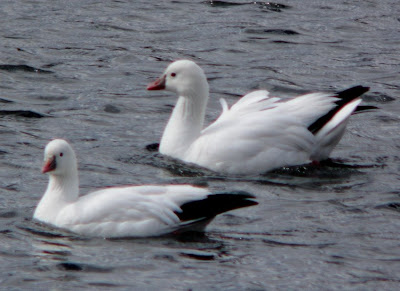 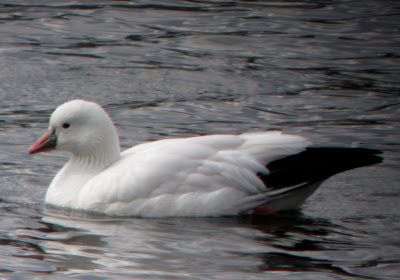 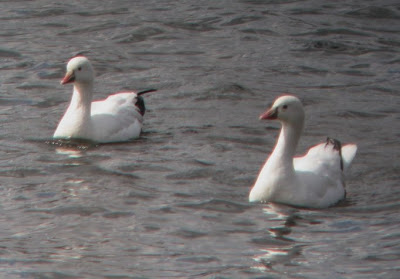 In the field one bird appeared a bit larger than the other and also had a bit longer billed. 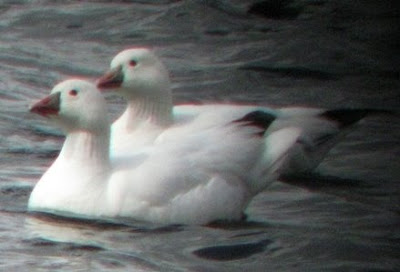 Whats this...a double-mint comercial!
A brief visit to "The Bird Watcher's Supply and Gift", were I bought a few books, and was told there was a single Ross' Goose at Cross Farm Hill on Plum Island....my next stop. A few distant digi-scope shots of that bird are below: 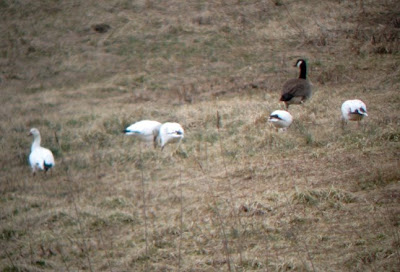 The Ross' right behind the Canada.

Missed getting the whole bill of the Snow Goose to the left, but even with this poor photo and bill and head structure is quite evident.

Some stuff from Maine will be posted in a day or two and a digi-scope of a hybrid Green-winged Teal from Bolton Flats.

Last Saturday 3/21 I birded various stops which eventually lead me to through Northfield, to Hinsdale, NH and I finished the day back in Northfield's Bennett Meadow WMA. A few pictorial high lights are below. 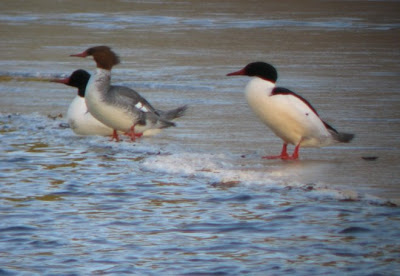 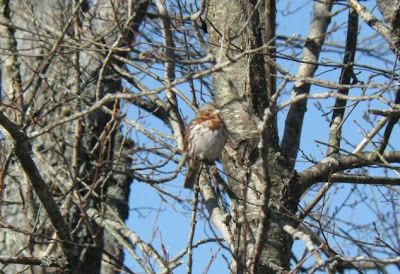 I found my first of year (Worcester County) Fox Sparrows (5 together) in Templeton. 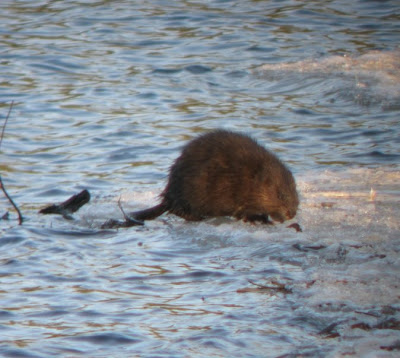 Muskrats were out and about. 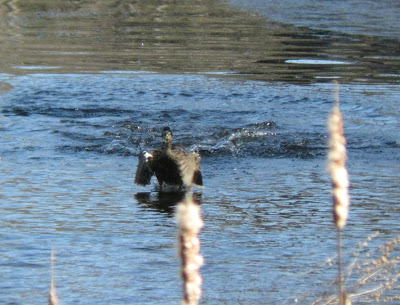 This is actually a pair of Mallards, the drake about to "jump" the hen, a lucky digi-bin shot. If you click on the photo and enlarge it, you'll just make out the out line of the male's head and white neck band. I'd like to say I skillfully composed it, but I didn't realize I "got" the shot until I uploaded the photo onto the computer. 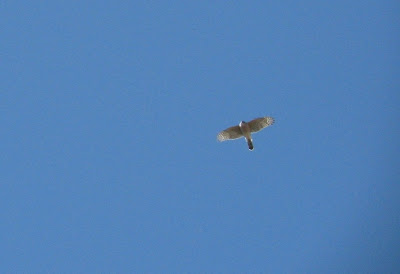 I was able to digi-bin this soaring Cooper's Hawk in Templeton. 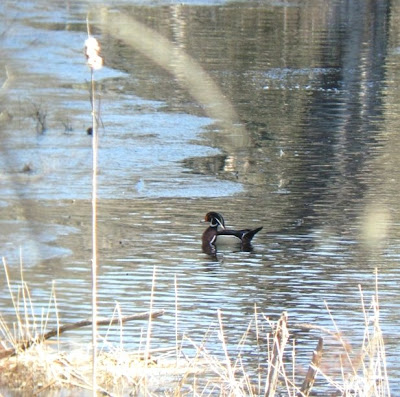 Species like this Wood Duck (above) and other waterfowl are a welcome sight after a long cold winter in Northern Worcester County! 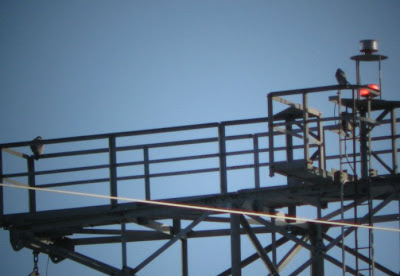 I had been reading reports (from Lance Tanino et al) of a pair of Peregrine Falcons fequenting the powerline stantions in the Connecticut River in Hinsdale, NH. I got a long distance digi-scope shot of the pair (not much to look at other than apparent size differential), the male (noticably smaller) to the right and the female (much bulkier) to the left. 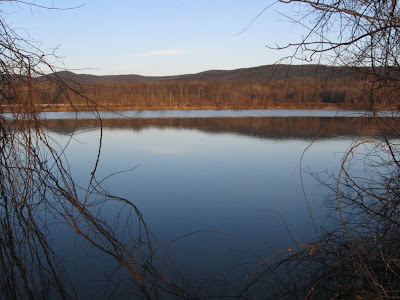 Just before sunset looking east from Bennett Meadow, many dabbling ducks were tucked into the far bank, catching the last rays of sunlight. In total just over 130 Black Duck at this location, more than 2 times as many Mallards, 30+ Wood Ducks and a few dozen Green-winged teal. These were probably low counts as there was a lot of arrivals and movement after dark.
Posted by Tom Pirro at 10:44 PM No comments:

I did some birding "here and there" in south western New Hampshire today. Walking from Keene center up to Chapman Road and back, about 4 miles, a few highlights included a Merlin near Water Street (a pair nested a few streets away from this locale 3 or 4 years ago), 3 Common Redpolls and many Pine Siskins (25+ no big flocks) their calls could be heard along the entire route. This Cedar Waxwing (below) cooperated nicely for a digi-bin photo. 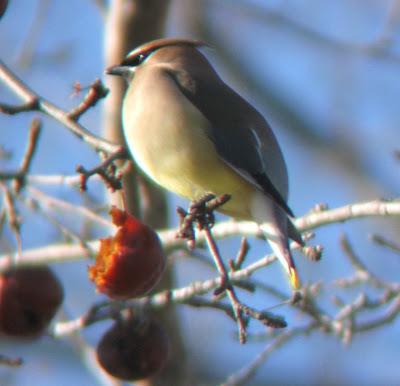 I drove River Rd. South (Westmoreland) and River Rd. North (Walpole) to look for waterfowl, raptors and ground birds such as pipits, Horned Larks and Snow Bunting...and pretty much struck out. At the junction of rte 12 and 123, in Walpole, there were a few hundred Canada Geese on the Connecticut River and 6 Bohemian Waxwings that were sallying for insects from the tree tops.

Arriving in Hinsdale around 3PM I walked the rail-trail to the overlook, across the river from the Vernon Yankee Nuclear Power Plant. The out flow from the plant keeps the water open all winter and large concertrations of waterfowl gather here. Approximately 3,000 Canada Geese were present when I arrived and "I got to work" scanning through the "confusion". After 15 minutes I got lucky and spotted a Greater White-fronted Goose sleeping near the edge of the ice. 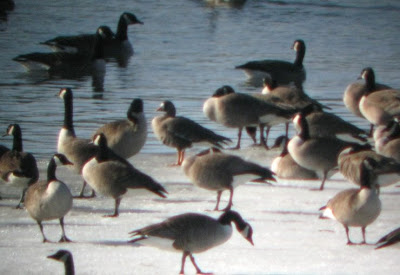 A distant digi-scope shot of the Greater White-fronted Goose, after it finally awoke.
Another 15 minutes later a good candidate for Cackling Goose "popped" into view. I studied this bird for several minutes noting its small size (2/3 of most Canadas), lighter colored back (frosty looking), squarish/blocky looking head, steep forehead angle and short stubbyish bill. Though I must say, I have seen some with stubber bills than this one. 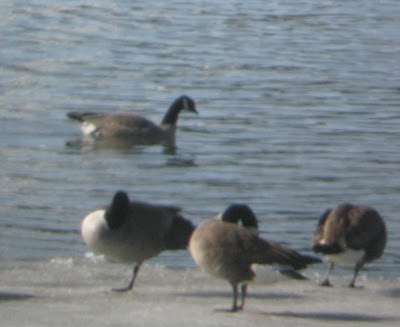 A digi-scope shot of the Cackling Goose on the water.

Two Snow Geese were also in the mix, making it a 4 goose day for me! I first spotted them on the ice and took the shot below through the binocular as they headed south. 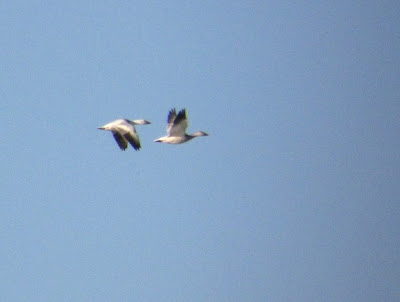 Digi-bin photo of 2 immature Snow Geese
A few other birders stopped by, Don and Martha, and another party of 3 with their very well behaved dogs. This Golden Retreaver, pictured below, despite remaining quite calm, gave the impression it would like to sink his teeth into some "fowl" .... might we suggest the Mute Swan. 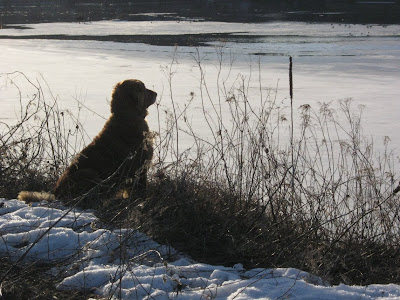 For most of the time I was present, there were 2 Bald Eagles in the area, overlooking the waterfowl but, leaving them unmolested. Don, had told me their nest had fallen over in the past year and we notice the pair checking out what looks like a potential new nest site (on the NH side of the river). I seem to recall, from a previous visit, there was a Red-tailed Hawk nest where these birds seemed to show interest in the new "realestate". 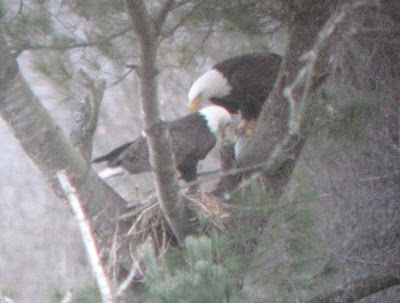