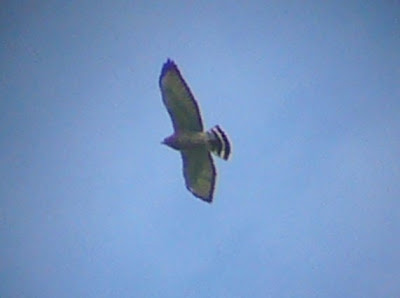 A digi-bin photo of a passing Broad-winged Hawk at Mount Watatic. Lillian and Don Stokes have some nice hawk photos on their BLOG, check the mid September entries.

For the past few years I have taken vacation time to count migrating raptors passing Mt. Watatic in North Central Massachusett, located 1 mile south of the Mass/New Hampshire border. While migration was well under way before I got started on 9/13, I had timed my vacation for the peak of Broad-winged Hawk Migration, typically taking place between 9/10 and 9/23. 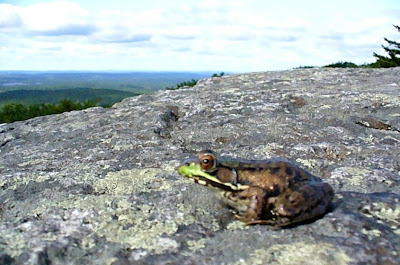 This "hawkwatcher" was particularly interested in the Broad-wing Hawk flight!
There is no road to the summit, but the hike on the Wapack Trail, a bit over a mile from Rte 119 in Ashburnham, is pleasant and the views at the top are among the best in central Massachusetts. I have included some photos from the watch site, located on what we call the "east summit", a rocky knob about 200 yards east of the main summit.

The View looking North West along the "Wapack Ridge", the 21 mile Wapck Trail runs along the ridge from Rte 119 in Ashburnham to just beyond North Pack just outside Peterboro, NH. For more information of hiking the Wack Trail see this link Friends of the Wapack . 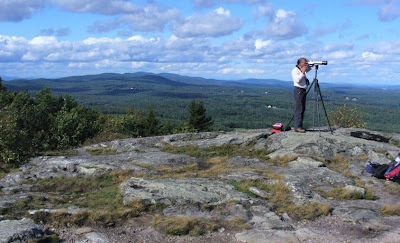 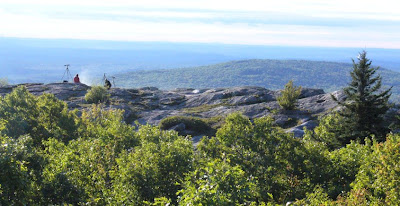 The East Summit, as seen from the main summit looking East. Blood Hill is in the back gorund to the right. The smoke is from Thom and Sue burning a smudge stick of white sage, a little Broad-wing "hocus-pocus" . 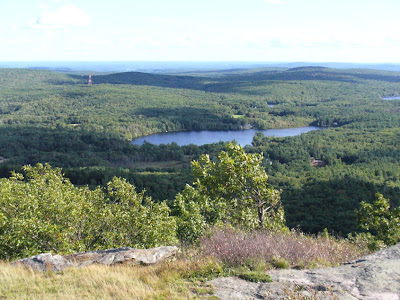 Looking southeast toward Billy Ward Pond, on a clear day you can Gillette Stadium in Foxboro, Ma. with optics. 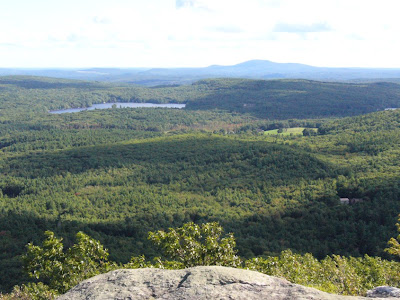 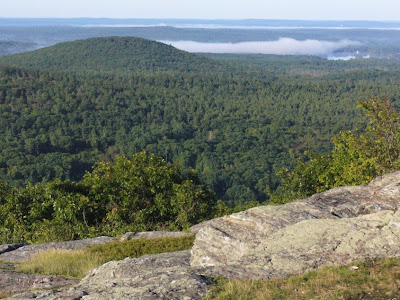 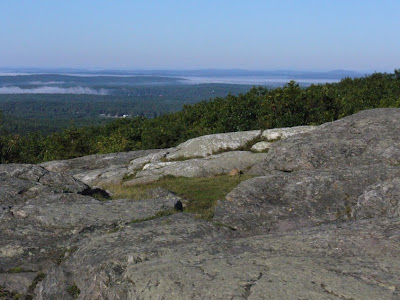 The view West South West, the biggest bump on the horizon (to the far right) is Mount Grace.

This hill top affords a great view in nearly all direction, so when the hawks aren't flying we enjoy the scenery and dramas like the one below. 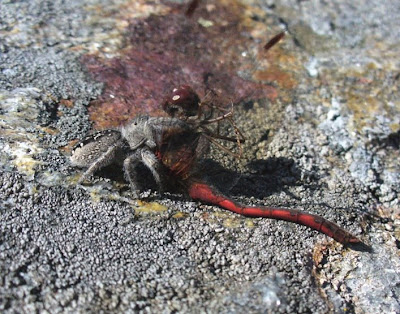 At first I thought the Dragonfly (one of the Meadowhawks) had the spider, but it was the spider that had the upper hand. When you notice stuff like this on a hawkwatch...the birds aint flyin.

We hit it big on the 18th with nearly 2,000 raptors passing between 9 and 10AM, the bulk of which passed just west and many close and over the summit. Thom and I divided sky, he taking the west and me the east and Sue tracking birds over head. I while I was busy counting, hulkered down out of the wind, a few dozen here and there I could hear Thom's commentary in the back ground. Finnally he said "take look back here" as dozens and dozens passed close by and 3 kettles of Broad-wings were behind the hill, about 200-300 hawks in each. As happens many times a flight may start with many passing on one side of the hill (today the west) and then switch to the other side (today the east). Between 11 and noon we had nearly 1900 pass, but this time mostly to our east and more distant, expect for the 500 high-flyers that came right over the summit and nearly got missed in the blue sky! We would finish the day with over 5,000 birds, nearly all Broad-wings. Details from the week can be found here: Mount Watatic Hawkwatch.

I will probably do some more counting this fall and will add to the Hawkcount.org data base, Hawkcount is good site to look around and check on numberous watch sites in Canada, USA and Mexico.