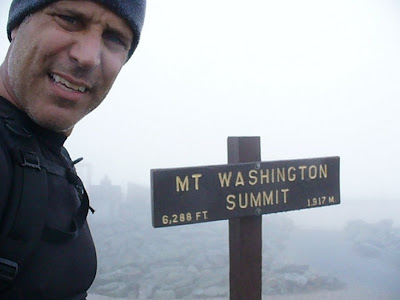 Last month I Hiked up the Ammonoosuc Ravine Trail to the AMC Lake of the Clouds hut, over to Mt.Monroe, back towards the hut and on to Mt. Washington, via the Crawford Path. The descent was via the Gulfside Trail, skirting Mt. Clay and down the Jewel Trail, back to the trailhead completing a 10.5 mile loop. The primary focus was hiking but I did manage to see and hear some nice birds along the way. 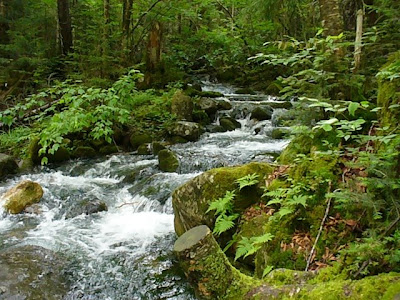 headwaters of Ammonoosuc River about a mile from the trail head.
From the parking lot, at the trail head, was a few Swainson's Thrush, a White-winged Crossbill and 4 Evening Grosbeaks. The trail began a fairly easy, but rocky, ascent for the first few miles where the path paralelled the Ammonoosuc River (a fast flowing stream at this stage). Afterwards, the trail became steep and the river is a series of spectacular water falls and pools. The most common bird of the day was Blackpoll Warbler, which I probably under counted. 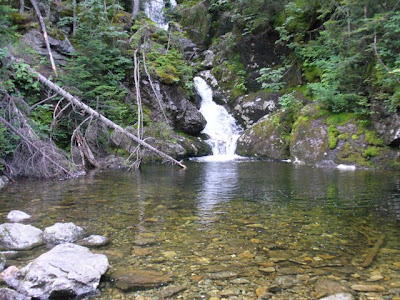 A pool about 2.5 miles into the hike. 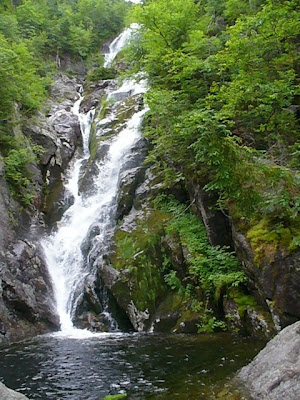 A short spur (a few hundred feet) from the main trail leads to "The gorge", well worth the side trip.

Visibility was poor once I reached about 4500 in elevation, less than 100 feet at times but at least there was no heavy rain. Dispite being mid July, gloves were a nice addition to the pack as the moist air and 30+ MPH wind quickly chilled the hands. Once above tree line I heard a few Dark-eyed Juncos and White-throated Sparrows but little else. 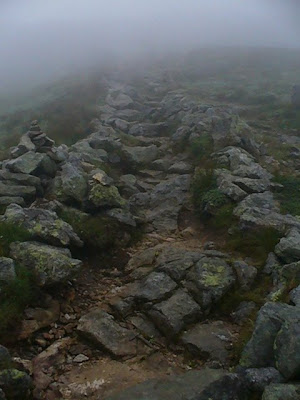 Heading toward Mt. Monroe
The summit of Monroe had essentially zero visibilty and the wind was gusting to 40MPH, so after a quick touch of the summit marker I headed back down.
Only a few hikers were on the trail between Monroe and the Washington summit, they being a few "staffers" packing food to The Lake of the Clouds AMC Hut...frozen turkeys and butter was "the order of the day". 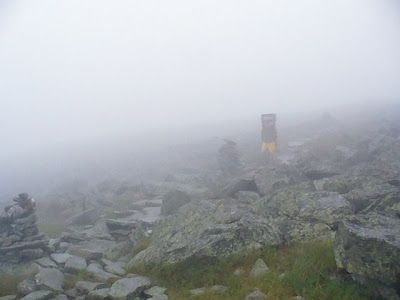 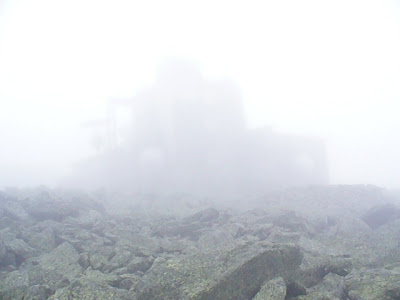 A Mt. Washington summit building through a thick fog
With the Washington Summit "socked in" there was only a few tourist at the visitor's center but there were perhaps 15 to 20 hikers. A bowl of hot chilly, from the visitor's center "cafe", was a nice addition to the sandwiches I had packed for lunch.
After coming off the summit trail I joined the Gulfside trail, where it crosses the Cog Railway track, heading toward Mt. Clay. Just before reaching the rail crossing I heard then saw 2 Amercian Pipits, this is one of the few places this species breeds in the north east, I believe Mt. Katadin in Maine is the only other. 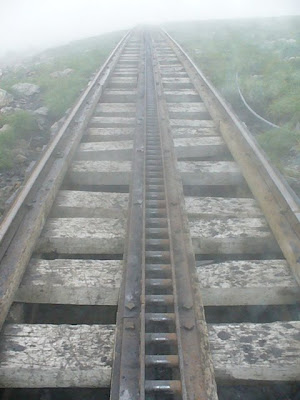 The Guldside Trail crosses the Cog RR track. Top speed of "the Cog" is about 2 MPH, being run over by the cog would lead to an instant nomination for " a Darwin award"!

The cloud deck rose a bit offering a wonderful view of Mt. Clay as well as a nice look down into the Great Gulf, toward the east. Not having time to climb Clay I followed the Gulfside trail to the west of Clay where it intersects with The Jewel Trail which leads back to the trailhead. 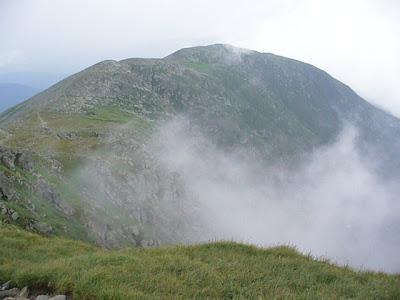 Mt. Clay from the Gulfside Trail 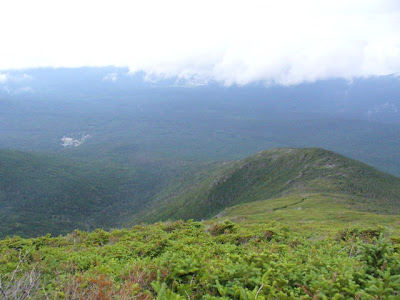 The Jewel Trail heading down from the base of Mt. Clay. The patch to the left is the end of Base Road, the departure of the Cog Railway, the trailhead is a mile beyond that. 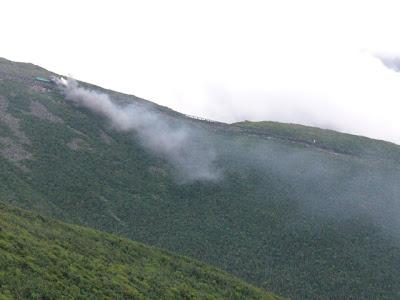 "The Cog" chunging toward Mt. Washington.
Once I was back below tree line and into the forest I heard my first and only Yellow-bellied Flycatcher. Shortly after, I crossed paths with 3 Gray Jays, 2 adults and one Juvenile, which approached to wait for handouts . The adults were more bold than the Juv., but eventually the youngster landed on my hand for some trail mix. 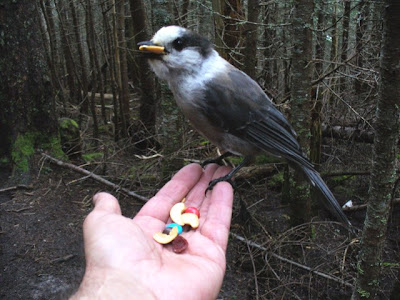 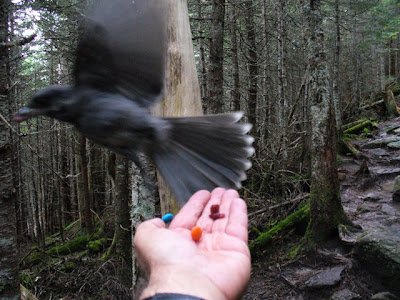 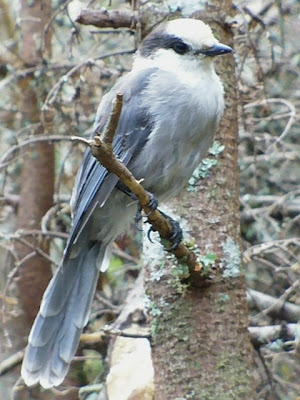 Ad. Gray Jay posing nicely
The last few miles of the hike were uneventful, and tough on the knees, but upon reaching the parking lot this Red Fox was walking across the parking lot. 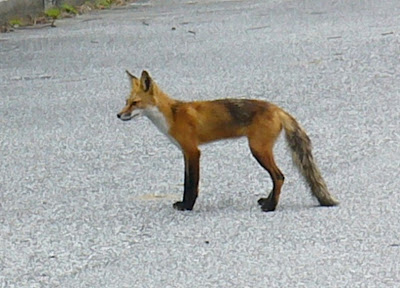