Coverage of the Baldwinville/ Winchendon section of the Athol Christmas Bird Count began at 5am on Saturday with a clear sky and "dead calm". The weather was cold enough so the dirt roads of Otter River State Forest and Birch Hill Wildlife Managment Area were firm enough for 2-wheele drive travel. The first 3 stops got no responses for Saw-whet Owl, but one answered my calls from a stand of young White Pine a few stops later, another returned a call. Nothing else responded before dawn, but this was a fine start.
Gail and Jay joined me for the morning portion of the count and we walked the edge of the "back bay" marsh and several village streets in our section. We did well on Canada Geese and a few Mallards along the river, unfortunately the number of sparrows were "off" along the marsh's edge this year. Slowly, we began to gather a decent list of the regulars, and also added new species for this portion of the count (an over due one that), Red-bellied Woodpecker. Purple Finches (5) were also a nice addition. Most years there is a Northern Mockingbird in the neighborhood and some years I have to nearly go "door to door" to find it, about 9am one perched atop a large spruce tree, later another was found. "Mockers" are not common up this way, so it was good to get these tallied early in the day.
﻿
Of course a some of the so called "undesirables" were added to the list, a 150+ European Starlings, a small flock of Rock Pigeons, House Finches and House Sparrows﻿..call them the "filthy four", actually this year it was the "filthy five" as 4 Ring-necked Pheasants were tallied late in the day.
While scouting a few days before I had found a Chipping Sparrow in the area, we tried 2 times in the morning, after Gail and Jay departed I tried twice more...nothing.... ditto for a few Carolina Wren spots. Finally at 3:30, on the 5th visit, the "little chippy" popped out of the thicket. Of course these 4 re-visits to score the "chippy", cost addition stops at additonal survey areas....always a delema whether to try for an uncommon scouted species or just run the route.
﻿
﻿﻿
﻿﻿
﻿﻿ ﻿
﻿﻿﻿﻿ ﻿
When it was all said and done the total species count was 33 (yes...including the Ring-necked Pheasants) which was above the average of 30 species for this area as was the 876 individuals over an average of 724. The number of introduced individuals was 260 vs. an avg of 212, but was the highest since 1998. When I began covering this section of the count in 1993 there was a higher number of Rock Pigeons and European Starlings, perhaps the dismantling of the Temple-Stuart manufacturing complex provides less roosting "habitat" for these two species.

Karin and I drove up to West Newbury, Salisbury and Rowely on Saturday 12/3. The first stop was the Cherry Hill Reservoir area. The Cassin's Kingbird, that has been frequenting the reservoir area, was the first target. Upon arrival five birders were seen across the wet field, each busy looking through their optics in the same direction. A certain sign the target bird was currently in view, after a quick dash across the field I was afforded nice views of the bird.
﻿
﻿On the water was a drake Canvasback, which showed nicely along with several Ruddy Ducks, Common Mergansers, a few Buffleheads and Common Goldeneye.
On the way home we "swung" through Rowely and were fortunate the previously reported Sandhill Cranes were in view. The pair stayed in close proximety to each other, strutting through shallow water of a wetland right off rte 1A.

On Monday I decided hike, sight-see and bird (a little) along the Tully Trail in the North Quabbin Region, the complete loop would travel through portions of Royalston, Warwick and Orange. While there are no large hills or mountains, there would prove to be plenty of up and down to go with the milage. At the Tully Lake Trustees parking lot, there was some finch activity American Goldfinch, a few Purple Finches and Pine Sisikins passing overhead. After birding a few minutes, I headed off in a counter clockwise direction.
﻿﻿﻿

A recent hike into the North East watershed of Quabbin reservoir was very rewarding. Beginning at gate 35 and I traveled south along the east shore on what was known as North Main Street. After about 3 miles I bush whacked off road along the shoreline (the North Dana area) and back toward Soapstone Hill on to gate 36 then traveling west back to the shoreline and traveled back to gate 35.
Under a powerline cut was a stand of Winter Berry, which attracted a dozen American Robins, also in this area was a Red-bellied Woodpecker, Dark-eyed Juncos and an assorment of Tufted Titmice, Black-capped Chickadees, White-breasted Nuthatches and Golden-crowned Kinglets. 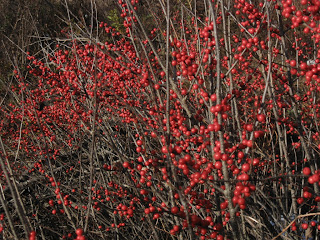 Abundant Winter Berry
Along the road was a good deal tree damage from the recent blizzard, I imagine the DCR crews will be busy clearing off the roads over the next few weeks. While walking the road I flushed a Bald Eagle from the tree tops a few times. As typical for this area, I would see at least five of this species over the course of the day. 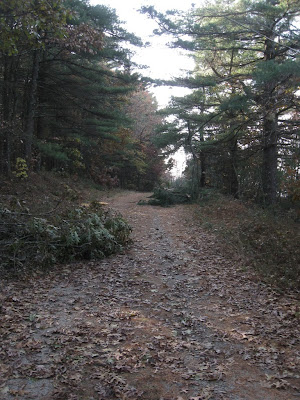 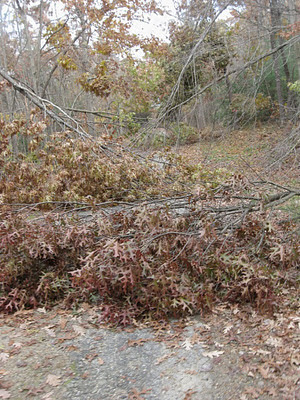 Some areas had more extensive damage than others. 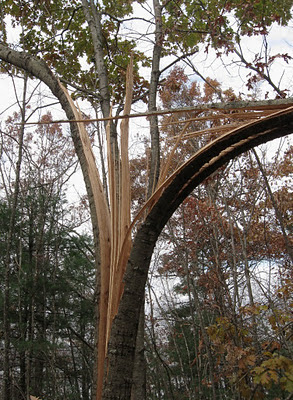 Weight must have been evenly distributied on this tree and the trunk split down the middle!
Weather predictions had called for a calm day,  I could not recall the water ever being this calm at the Quabbin. The glassy conditions made for nice scenery and photos. Below are just a sampling of the remarkable calmness. 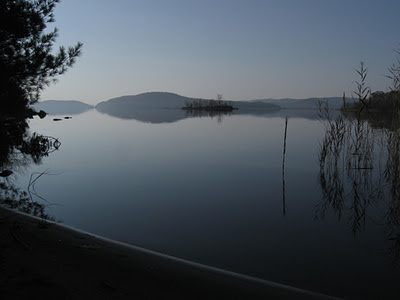 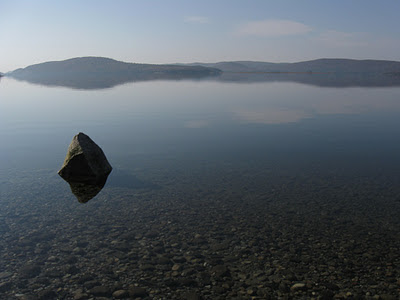 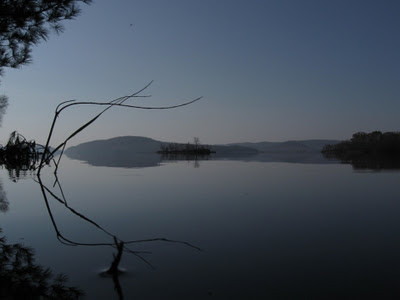 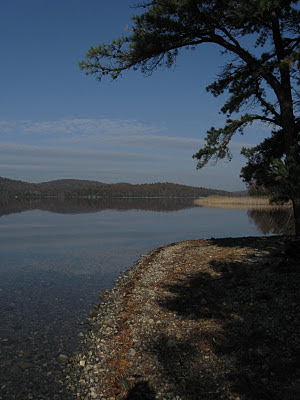 While I would see no mergansers of any species all day there were at least 21 Common Loons, several Ring-billed Gulls, 2 Red-necked Grebes, a single Long-tailed Duck (formerly known as Oldsquaw) and the 34 Horned Grebes I counted was the highest inland total I've ever counted. There was one raft of 9, two of five and and assorted groups of 2 and 3. While on a remote point in the North Dana section of the hike I could hear a few Horned Grebes calling back and forth, something I had never heard before! A small raft of 5 Horned Grebes 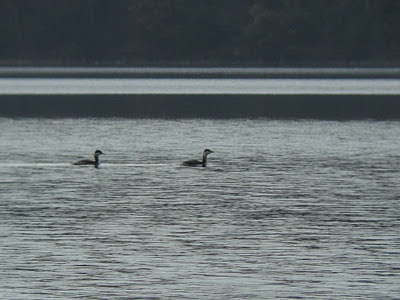 I had heard these two birds calling along the North Dana shore! 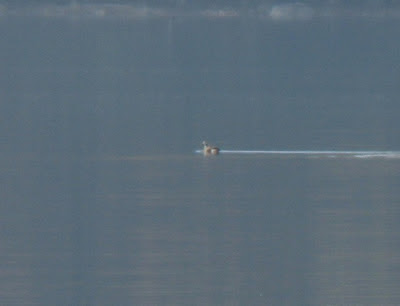 This single Long-tailed Duck dove frequently, apparently feeding.
While bush whacking the shoreline I had to cut into the woods in places, as the water level was high, I flushed two American Woodcock and a Ruffed Grouse. Near the shoreline I came across a Snapping Turtle shell and skull, saw 2 White Tailed Deer along the NE shore of Mt. "L" and heard a pack of Coyotes howling from the south end! 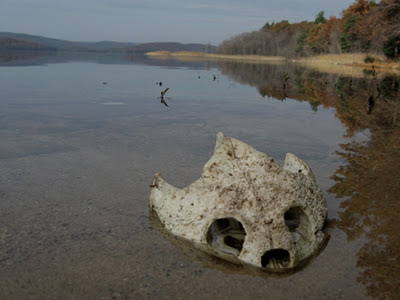 Almost made it to shore! 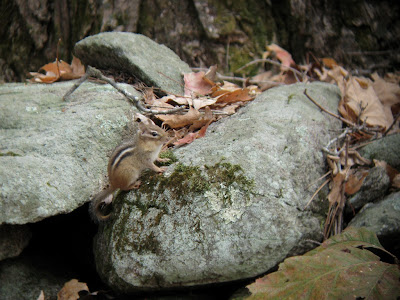 A handsome "Chippy" along a stone wall.
In the North Dana area I found, and left unmolested, various artifacts from "days past". One appeared to be the remnants of an old vehicle, some pails, broken stoneware (below) and the base of an old observation tower. I understand there was a tower in this area that was used during WW II when the military used the area to drop "dummy" bomb, for practice. 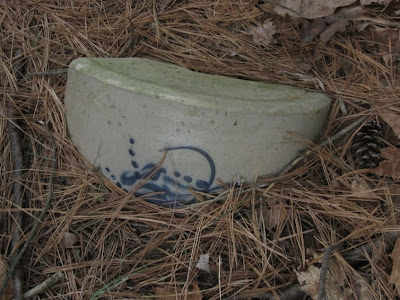 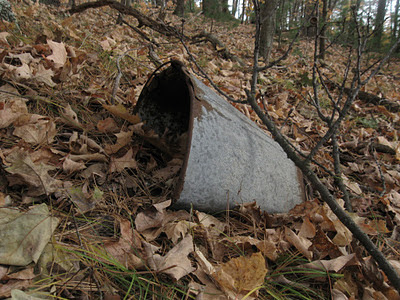 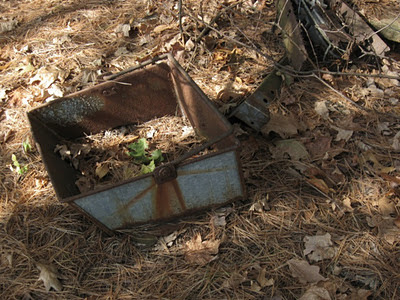 A nice stop for lunch! 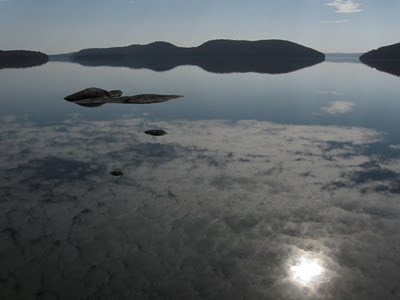 All was calm, and no boats made the trip all the more special. 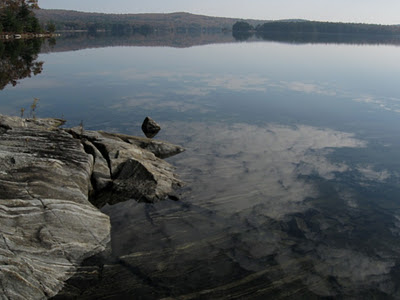 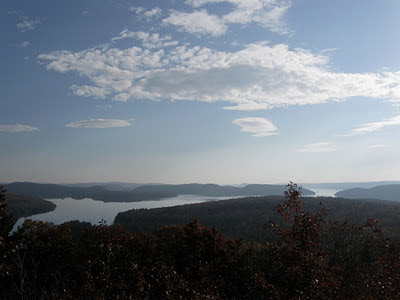 The view from atop Soapstone Hill. 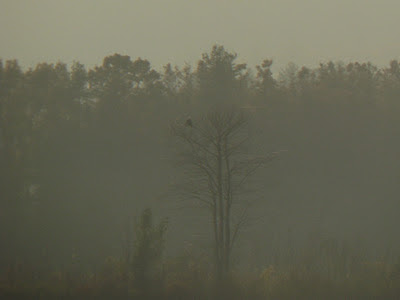 A digi-bin shot of a Bald Eagle in the distance. 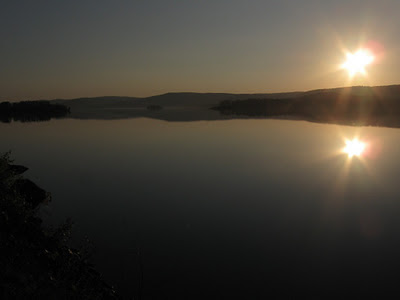