Yesterday afternoon and evening took a hike along some of the less traveled portions of the Wapack Trail, beginning in Ashburnham (Rte 119) heading north to Windblown Ski Center off Rte 123 in New Ipswich, NH and back. I decided to skip the Watatic summit, as I wanted to cover some areas I havn't visited in some time. There was little bird song during the heat of mid-day, but I did hear a few Blackburnian Warblers and Winter Wren before hitting the New Hampshire border.
The first "land mark" was Binney Pond, a beautiful undeveloped pond a few miles into NH, were heard a few Hemit Thrushes singing despite the heat. This appears to be the kind of place one might find moose wading along the shore. 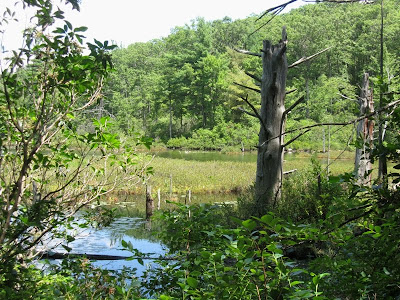 Binney Pond from the Wapack trail.

Just north of Binney Pond the trail leads toward the summitts of Pratt, Stoney Top, New Ipswich and Barrett Mountains...all 1800-1900 feet in evevation (similar in height to Watatic). On the south east shoulder of Pratt is an excellent vista, where Binney Pond and Mount Watatic can seen from a rocky outcrop. 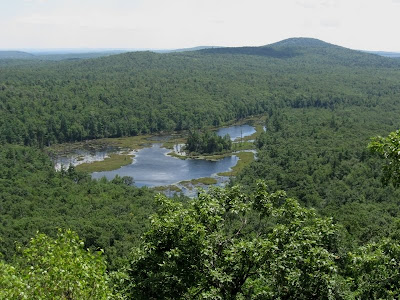 Binney Pond and Mt. Watatic, one of many fine views along this portion of the Wapack Trail.

I had come prepared, with extra containers, in the hopes of filling them with wild blueberries and I was not disappointed. A considerable amount of time was spent picking and a nice west breeze kept the heat and the insects at bay. While picking, a few Cedar Waxwings, perched in a nearby spruce tree and appeared to be agitated with my presence but I'm sure they got over it. 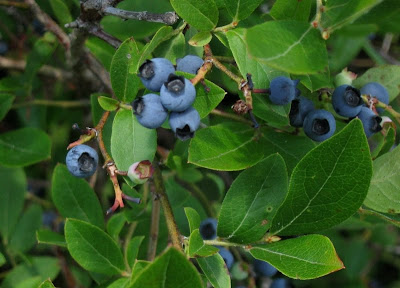 Wild Blueberries at their "peak" in the area.
From Stoney Top were nice views looking north west toward Monadnock and east to Pratt Pond....below 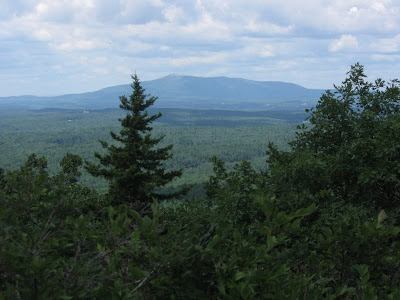 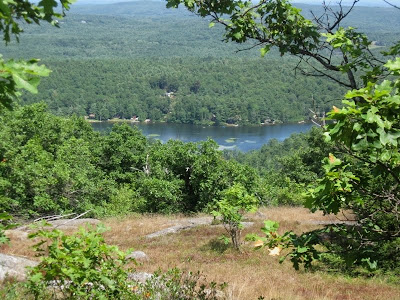 The view east down on Pratt Pond, its shoreline is dotted with camps and homes.
Moving along northward on New Ipswich mountain I heard the calls of a begging raptor and the "ki-ki-ki-ki" calls of the parent, Sharp-shinned Hawks! I had recalled reading of a report of nesting "Shins" along the ridge, on the New Hampshire birding listserv last year, that was a nice surprise! Further up the trail I flushed a family of Ruffed Grouse, one squealing parent and two young (about 1/2 the size of the adult). Not far from my "turn-a-round" point at Windblown Ski Center were a few wild turkeys, but it was difficult to see if they had young or not as they were in thick ferns. 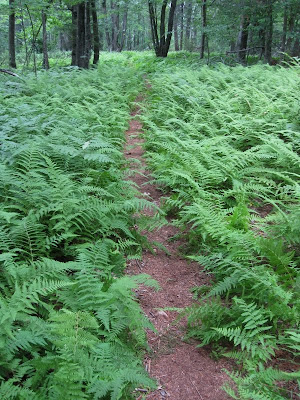 A nice patch of ferns near Windblown Ski Center.
I would follow the same route back, but unfortunately I ran out of water 5 miles from the car, its amazing how quick a gallon of fluids can be consumed on a hot day. I did flush the grouse family again, at the previous location and more blueberries found their way into my possession, I could have easily spent the whole day picking. 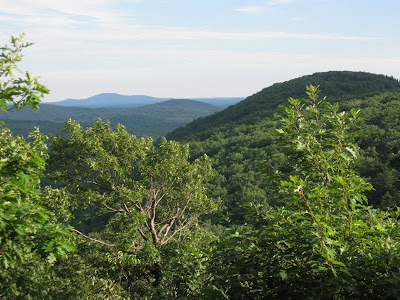 From left to right, Wachusett Mountain (back), Little Watatic (small bump in the middle) and Pratt...taken from the south side of Stoney Top.
The best surprise of the day was a Black Bear, that stepped on the trail not 50 feet (~17 paces) in front of me. Fortunately the ole cliche' about "they're more afraid of you, than you of them" held true to form! Once it saw me...it BOLTED away, plowing through thick tangles and saplings with amazing speed, before "bear" even registered in my overheated, water deprived...mental stupor. Had it known I was carrying a good "haul" of blueberries the story might have ended differently, but seriously..... truely a beautiful animal and easily the highlight of the trip.
Posted by Tom Pirro at 12:53 PM 2 comments:

The Gardner Airport and surrounding area provides diverse habitats for a broad range of avian species. Horned Larks have nested on the median stripe of the airfield for years, the recovering clear cut on the west side of the runways is home to Eastern Towhee, Field Sparrow, Prairie Warbler and even a territorial Clay-colored Sparrow for a few weeks back in 2008.
On a late spring/ early summer moonlite night, Whip-poor-will and American Woodcock are likely to be heard, while the surrounding marshy areas, along the Otter River harbor American Bittern, Great Blue Herons and waterfowl. 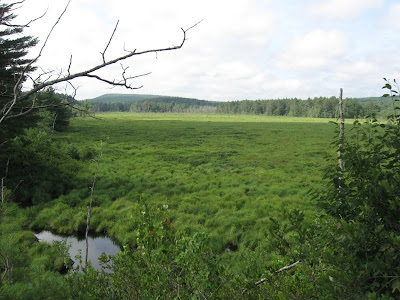 This wet meadow (above) to the south of the airport is a great spot to listen for American Bittern, it also looks like a great spot for Sedge Wren..maybe some day I or another lucky birder will find one here. Today I had to "settle" for Common Yellowthroats and Swamp Sparrows but the hen Black Duck and 3 ducklings were a nice addition to breeding bird atlas field card. 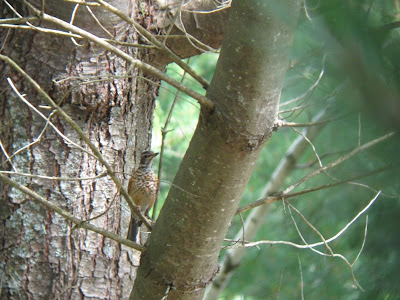 Many young American Robins (above) were seen, Eastern Kingbird fledglings, being fed by parents, were seen in 3 different locations. The marshland to the east of the airport, Pale Factory Swamp, had as many as a dozen Great Blue Heron nests back in the 1990's, today I only found one active nest and the few others did not appear to be in use as of this year. 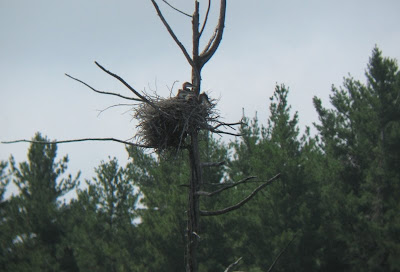 Four young Great Blue Herons appear ready to leave the nest very soon.
I had some nice looks at Horned Larks today, this is one of the few places they still nest in North Worcester County. Below I have a few photos of a juvenile and adult that were taking a dust bath, it may look like the adult was sitting on a nest but it was not. 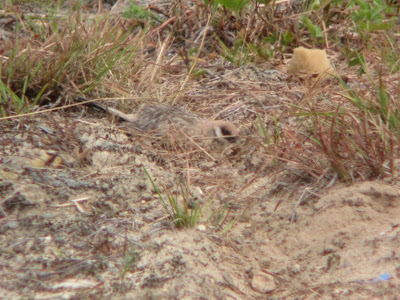 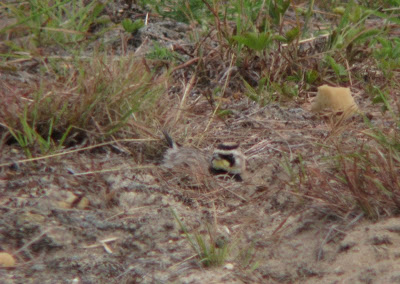 Once the head is lifted they are a bit easier to see. 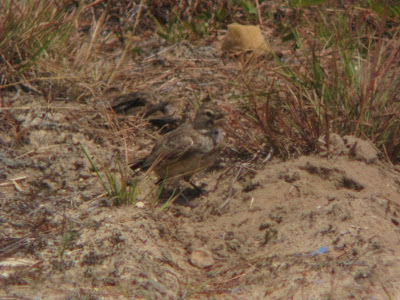 Here the juvenile stands up after "playing" in the dirt, the adult is just behind and difficult to see. 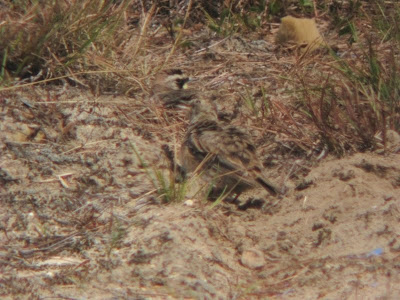 The juv. looks skyward, while the adult looks to its right. 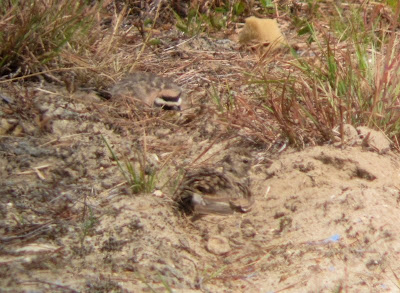 The youngster in front and adult in back both hunker down in the sand.
Yesterday I was able to find 2 juvenile Horned Larks with an adult at the Fitchburg Airport, there were also a few hundred swallows of various species, including 7 Cliff Swallows. The "Cliffies" likely nest fairly close by, as there was a sizable nesting colony in nearby Lunenburg. The small barn they had nested on was is rough shape and was torn down a few years back, and hopefully they have found an alternative site (s) nearby.
Posted by Tom Pirro at 12:46 PM 2 comments:

After a strong thunder storm passed through central Massachusetts this afternoon, I "caught" this heron preening and then sunning as the storm cleared off and the sunshine returned.

Not as sharp as I like but the price was right. 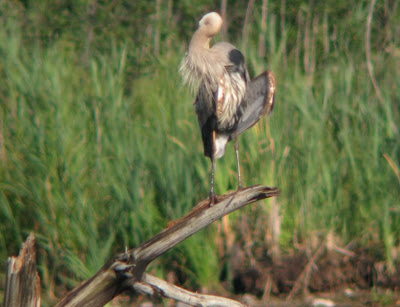 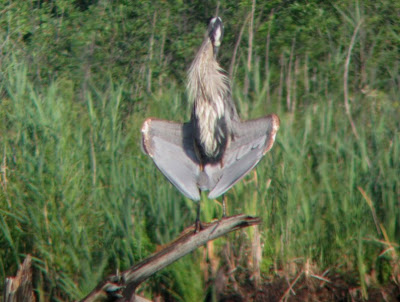 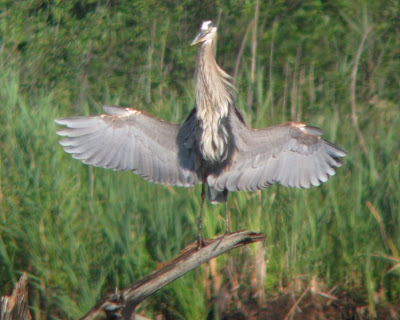 It held this pose for a few minutes, not unlike a cormorant or Turkey Vulture. 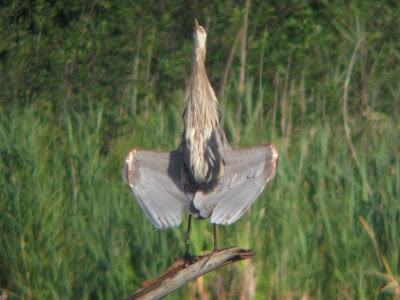 a psuedo "bittern pose" ( I did see two American Bitterns during an early morning walk). 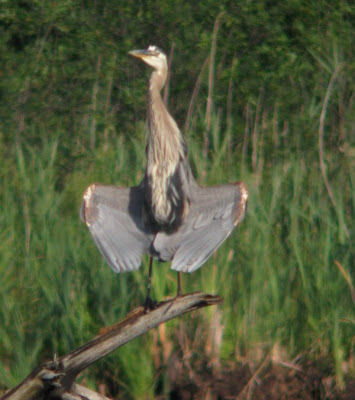