This noon Bohemian flock looked to be at its largest (that I have seen) since 4 first showed on 2/21/2015, down the street, at the corner of Green and Matthew's Street. My initial estimate, on site, was for 250+. So for accuracy's sake, I waited for all the birds to consolidate in the maple they prefer, and snapped a photo. After dropping it in "paint" and using a modified "Mirick dot method" I came up with 297.

here is the picture and few more shots from last Monday 3/23: 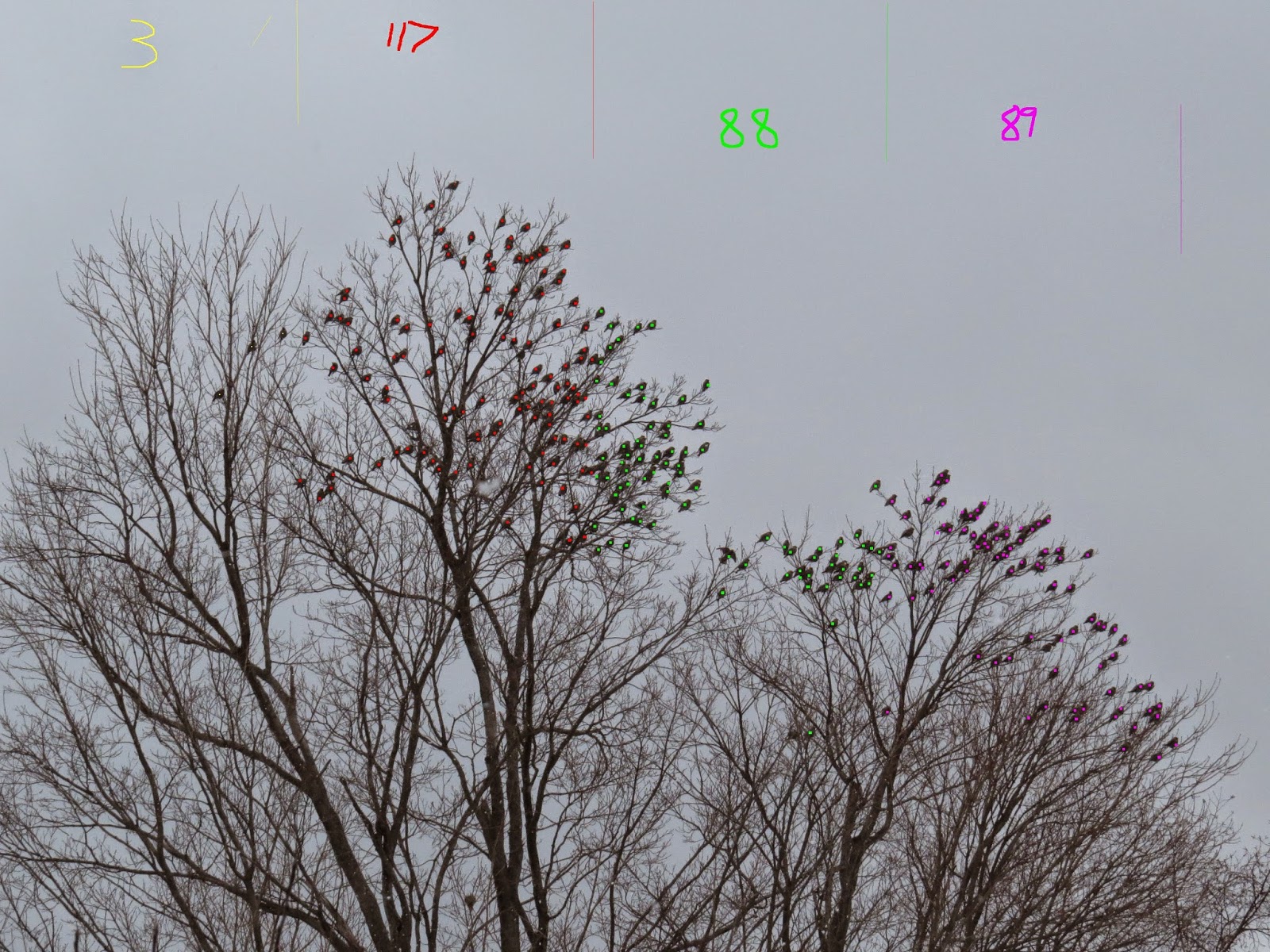 Here are few shots of the nearby Eastern Screech Owls, from January (Gray) and March 11th (Red), may they enjoy peace, solitude and have young.

At home was a nice showing of finches, approx. 70 goldfinch, ~20 siskins and a dozen House Finches....no "purples" at home yet.

At the Westminster Landfill, scanned from a distant hillside, were Turkey Vultures (5 or 6), Herring Gulls (~250), Great Black-backed Gulls (~25) and a single Iceland Gull (a distant smallish white winged gull).

At Sterling Peat, in Sterling was a Brown-headed Cowbird and a Red-tailed Hawk was cooperative for a brief photo session. The Thompson Basin of Wachusett Reservoir had some open water holding several Common and Hooded Mergansers.

Hilites from the River Road section of Wachusett Res. were Common and Hooded mergs,  a Mute Swan, Wood Duck,  a few Common Goldeneyes, and a Ring-necked Duck for waterfowl.  The hybrid Red-shouldered-x- Red-tailed hawk was still present. It was "perch hunting" from atop the tele-poles along the main road. A silent Tree Swallow passed overhead, not much for it to chirp about with the heavy ice and snow cover!

At Coachlace Pond in Clinton was a single Tree Swallow, Eastern Phoebe and Rusty Blackbird along with a juv. bald Eagle passed over head.

Finally at the Fitchburg Airport was a single Snow Bunting and 150 gulls all Herring and Black-backed.

On 3/17 I came across the flock of approx 140 Bohemian Waxwings on Lake Street in Gardner and today near Heywood Hospital (Green Street) about 225 to 250. Sure this year's spring migration is sluggish..., but with a show like this ....who cares!

Here are a few images I have recently taken:

Note, after "dropping" a full size version of the photo below into PAINT, and counting while placing a colored dot over each bird,  I came up with 219 BOWA"s in the photo. Then adding the 40-50 that were feeding nearby would bring the total to between 259 and 269.


While the uncommon Bohemians tend to "steal the show", when you can find them, our "resident" Cedar Waxwing is quite a handsome bird too. A few recent shots of this local breeding species!

I have scanned the Westinster "industrial Landfill" from a nearby hillside, the past few days, 100-200 gulls have been present and a least Iceland Gull was mixed in. Gulls have also been loafing on the Fitchburg Airport runways, the attraction is a large waste transfer station "next door". Saturday was tough viewing, they were mostly obscrurred by high snow banks or at the transfer stations (out of sight), but Sunday many were in the open. I was able to pick out 3 Iceland Gulls among the "scrum" of ~500 gulls. The break down was ~450 Herring, 40 Great Black-backed, 3 Iceland and 2 Ring-billed Gulls.

The Iceland Gulls present were 1 first winter, 1 second winter and an adult.

Very few early spring (actually late winter) migrants have arrivied in the north Worcester County hill towns this season. During most years "eary spring" migrants such as Wood Ducks, Hooded Mergansers, Turkey Vuktures, Red-winged Blackbirds, Common Grackles, Brown-headed Cowbirds and Killdeer are often wide spread in the area by this date. But with recent morning temps from -5 to 10 degrees F and 2 to 3 feet of snow on ground the early migration season is currently sluggish at best.

Along the Otter River on the 5th were 4 Common Mergansers, one was wrestling with a  "bullhead" catfish, after about 5 minutes it finally "choked it down".  On Feb 25th I spotted a largish raptor like bird in the distance over Gardner, it turned out to be a Black Vulture, my first ever for Gardner....city bird # 217.