The serious weather held off for this year's Westminster CBC, it was snowing lightly when I left at 6AM, the winds were light and temperture about 30 degree F. I had no "reponses" while owling near Lake Wompanoag, then began day-time birding near Mount Wachusett Community College. A few calling robins and crows were the first birds just before dawn. While checking the fruiting trees near the buildings I heard a the call notes of a Snow Bunting, I eventually saw the loner high overhead. 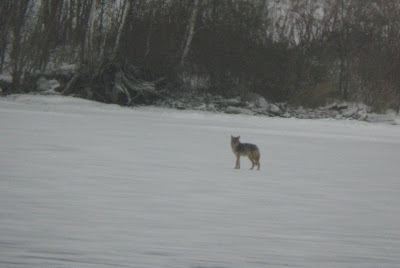 This handsome Coyote was walking across Crystal Lake.
Near Crystal Lake, which was completely frozen (as expected), were a few Song Sparrows and single Herring Gull among the more common species. Gull numbers, in this section of the count circle, have decreased since the closure of the city landfill, a few years back. Small numbers of Ring-billed Gulls, that frequent fast food joints and shopping plazas, are now the most common. 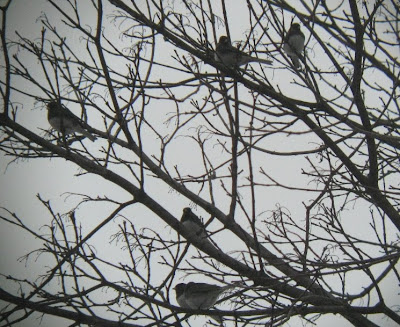 Juncos were plentiful, here is 6 of about 30 that reacted nicely to spishing while I visited a residential area.

While visiting the old landfill site and found a flock of Wild Turkeys, but little else. When the landfill was operational large numbers of gulls, crows and starlings where found here. I did scan the grassy areas, of the capped dump, for ground species such as Snow Bunting or Horned Lark, I saw neither. 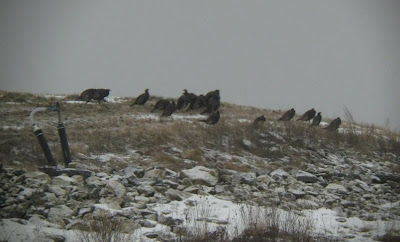 This flock of Wild Turkeys was at the old Gardner Landfill.
At Parker's Pond, which was frozen, where a few Canada Geese and Mallards which were also a bit of a surprise this section of the count. Near the Junction of RTE 140 and rte 101 was a nice flock of Cedar Waxwings, about 150 to add to a previous flock of 58. The larger, Bohemian Waxwings, are always hoped for but, both flocks I saw were 100% Cedars, beautiful none the less.
My girlfriend Karin joined me for the afternoon, we added numbers to the common species totals, while covering a new areas of the territory. We did manage another good look at a Cedar Waxing flock, likely some the same birds from the morning and added ravens to the tally sheet. While driving through an industrial park we were surprised to find a flock of Ring-necked Pheasants, 4 males and 3 females. 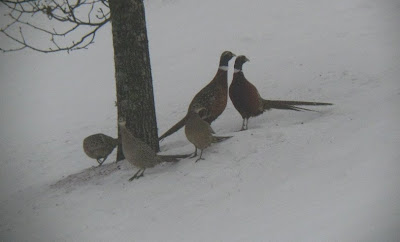 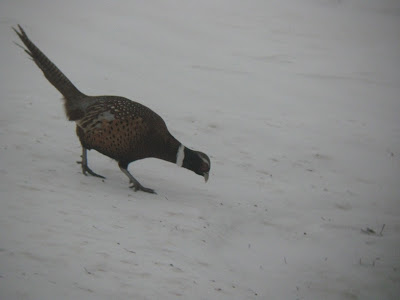 A closer view of a male.
12/27/2009 Westminster
Karin and I took a stroll around the neighborhood Sunday (12/27) afternoon to stretch our legs once the rain had stopped. We heard a Tufted Titmouse scolding from a small patch of hemlocks, the bird sounded extreemly angry. After a few minutes of searching the prize was located, a beautifuul little Northern Saw-Whet Owl. I had not brought a camera but, the tame little owl sat tight until we returned later to snap several photos. 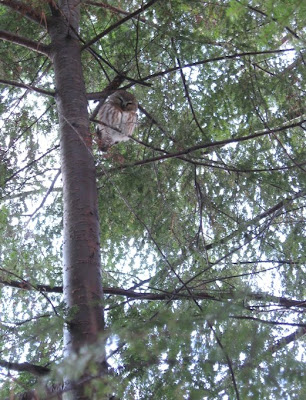 How can one not smile upon finding one of these little gems!
While this owl species was missed on count day (I think), it should go on the books, for the Westminster CBC, as a count week bird. 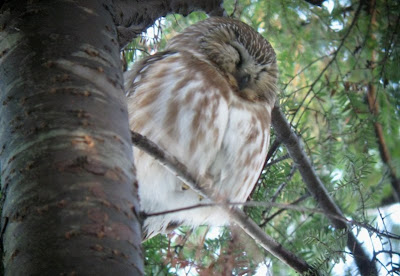 A digi-bin shot through the bins.
Posted by Tom Pirro at 7:31 AM 2 comments:

This was the 16th time I've done this section of the Athol CBC, so that expirence should be helpful, though just a few misses will bring the score down dramatically. More on this "contest" later.
I got under way at 5:30AM with the temperature being 12 f, but fortunately there was no wind. Good conditions to owl, a mile and half walk through decent habitat for Great-horned and Northern Saw Whet yielded nothing. I listened for waterfowl, which often roost on the Otter River, but the recent snow cover and fridged weather had "pushed" these species away from this portion of the count circle. 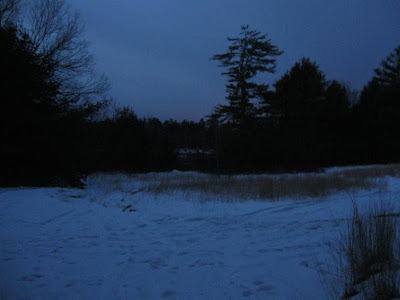 Day break.
After the failed owling attempt, I met up with Tom and Jonathan and we began our diurnal birding along the Otter River. While some of the more common species such chickadees, nuthatches, jays, crows and so forth were found an "expected" large flock of Tree Sparrows could not been found. Some years there had been 100+ present, we only found a 1/2 dozen. A few Song Sparrows, fairly uncommon up this way in winter, was nice and a calling Purple Finch was heard as it flew overhead. While Purple Finch is a nice surprise, I had not predicted for today's list...so thats a "black mark"! 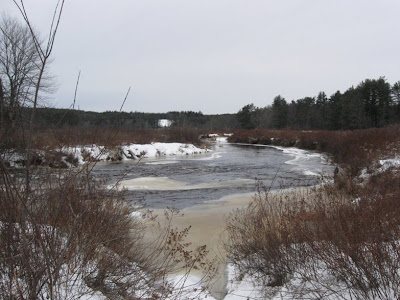 Plenty of ice, even on the faster moving stretches of the river.
Once back toward the village some of the "townies , such as Rock Pigeon, House Finch and House Sparrows, were picked up. This years total of House Finches (31) was the highest in many years, perhaps this population has recovered from the conjunctivitist disease? It might be of interest to check other CBC numbers once those are compiled and posted. We looked hard for the resident mockingbird, this miss didn't help the "test score". 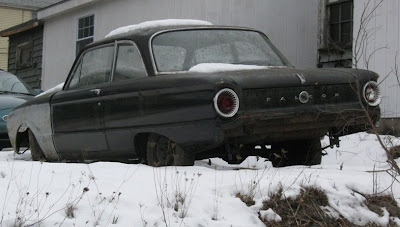 Other than a single Sharp-shinned hawk, this was our only other "raptor" of the day.
Once Baldwinville was canvased, we headed up to Lake Dennison. It had been very cold the past 10 days, but previously it had been a mild late fall. Warning signs of unsafe ice were posted all along the lake, so we were surprised to see 2 guys pull ice skates from their car. The birding had been dull for the previous few hours, so we stuck around hoping for some non-avian excitement... No dice. What little sense these guys had, kept them close to shore and out of the "drink". Being half dissappointed we moved on and found our first Golden-crowned Kinglets for the count. 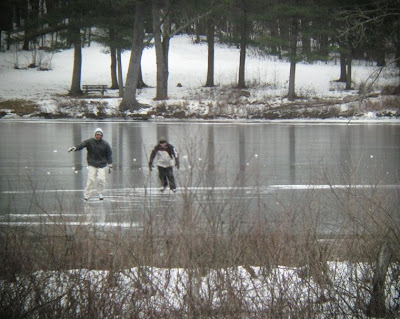 Some one has to be the first skaters of the season or last swimmers.
The roads to the north of Lake Dennsion were gated off for the winter, we did a one mile walk and then returned to Baldwinville in the hopes of adding a few new species or two. Eariler in the morning we'd seen a Ringed-necked Pheasant, ripped to pieces on the river ice. Upon our return, to our original starting point, we found 2 live pheasants, while we counted them (and a male found later) is beyond me why this species is countable as the state releases 40,000+ each year across the state. None the less it costs me a point on the test! 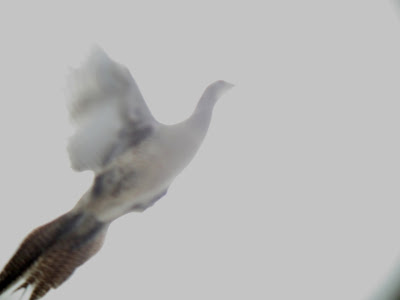 An over-exposed digi-bin shot of one of 3 pheasants in our area.
Our last "new" species of the day was Sharp-shinned Hawk, another "unpredicted" species and another minus one for the test.
Typically the Athol CBC is a good one for winter finches, but its been a very lean season for these northern "irruptives". The birder, below, had waited a long time for a grosbeak or redpoll or crossbill...and not even a siskin. 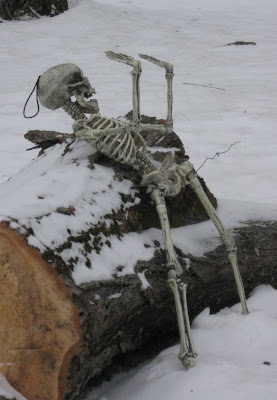 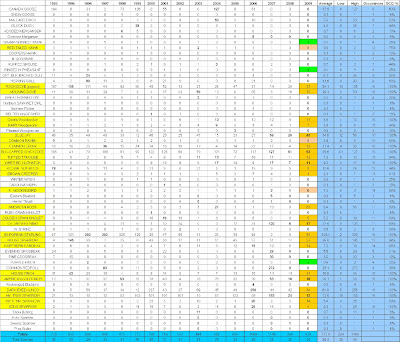