Saturday morning, at the Fitchburg Airport,  I was rewarded by closeup sighting of a small group of snow buntings near the main parking area. Also present were 25 Horned Larks.

Later in the day I stopped by Crystal Lake in Gardner, which was 95% frozen over a week ago, but had since opened up a bit. The lake was about 40% open and 3 scaup-like ducks were near a small group of Common Goldeneyes some 800+ meters away. Upon zooming the scope to 40X, 2 drake and 1 hen Redhead Ducks could be discerned, the males clearly showing bluish bills, black "bow and stern", gray mid body (sides and back) and of course redheads. This was only my 2nd sighting of this species in the North Worcester County area, the last being in late Oct. of 2005, also on Crystal Lake (3 males).

Later in the Birch Hill Wildlife Management Area I was fortunate to see a Northern Shrike just NW of Lake Dennison.

Before work there was a Long-tailed Duck (formerly called an Oldsquaw)on Crystal Lake in Gardner, it was only my 3rd or forth record of this species in Gardner.

An enjoyable Saturday morning neighborhood walk was productive with my first "local patch" Fox and American Tree Sparrows of the fall. White-throated Sparrows have thinned out in the past week with only a few present this morning being "replaced with numerous Dark-eyed Juncos. While Song Sparrow have been absent from the yard, I was able to find a dozen plus at the edge of a nearby corn field.

I hawkwatched for about 20 minutes from a vantage point at a vacant sandpit and noted 2 Red-tails, 2 Red-shouldered and 1 Cooper's Hawk migrating. A dozen Eastern Bluebirds passed along with a few Purple Finches. 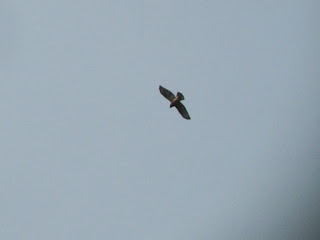 Another nice surprise was small mix flock of blackbirds that contained Common Grackles, Red-winged Black birds and 9 Rusty Blackbirds, in about equal numbers!

A quick check of the Old Mill pond turned up a female Gadwall, a very uncommon species in this part of Worcester County. She was consorting with the usual large flock of Mallards, but was noticeably more skittish as I approached.

A House Sparrow in my neighbor's yard, that I've seen a heard a few times this week, was my first "sighting" of this species from home in over 5 years. While it was a addition to the year's yard list (now at 94 species), I consider it a "low point".

The 1027 Quabbin Gate 35 field trip got off to a late start, due to me being a week ahead yet and hour behind. At home Karin and I, under my encouragement, set the clocks an hour back! Dick and Peg Knowlton had been the only people to show at 8am for the trip, but we did connect at 9am.

Along North Dana Road was a nice selection of late migrants, including 7 Hermit Thrushes, Ruby and Golden-crowned Kinglets, White-throated Sparrows and Junco. Near the reservoir several Common Loons were seen, but only a single Horned Grebe and no Red-necked Grebe. Four female Surf Scoters circled well off shore and were only identifiable through the scope, a Greater Yellowlegs was also seen in flight. Land birding was poor along the water's edge due to the strong wind coming in off the water.

A minimum of 5 Bald Eagles were seen, 2 pair of adults and a single first year bird that passed close over head.


After the gate 35 area tour we stopped at North/South Spec Ponds in New Salem, were several Canada Geese, 8-10 American Black Ducks, Mallards and a Pied-billed Grebe were present.

Another North Central Mass stop was the Church/Norcross Hill area, in Templeton , where Cooper's, Red-tailed and Red-shouldered Hawks were seen. A Northern Harrier worked the edge of a field and "caught" the attention of the 200+ American Crows. Many White-throated and Song Sparrows were present but the recently reported pipits were seen or heard.

Late Sunday afternoon I checked a few local ponds for migrant waterfowl, really hoping some scoters might have dropped down for a rest before continuing onto the ocean, however that was not the case. The "best" water birds were two Pied-billed Grebes on Round Meadow Pond, a Common Loon on Mare Meadow Resevior and two Common Loons on Lake Wompanoag (the loons were likely lingering nesters). However thicket birding paid off with a nice variety of sparrows, numbers of Yellow-rumped Warblers and Ruby-crowned Kinglets.
Swamp, Song and White-throated Sparrows were the common species found, but juncos were also present in a few spots and a Lincoln's Sparrow showed nicely in Gardner.


Also I checked Crystal Lake for roosting gulls near dusk, all three "common" gull species were present, but in low numbers; Ring-billed Gull (45), Herring Gull (12) and Great Black-backed Gull (11).  Nothing like former years when hundreds would congregate at dusk during the fall and spring. One of my largest gull counts, at Crystal Lake, was from Nov. 24th, 2006 with 75 Ring-billed, 2200 Herring and 500 Great Black-backed Gulls. With many landfill fill closures those days are likely gone (for Herring and "Black-backs"), not a bad thing for the water treatment profession.
Posted by Tom Pirro at 12:34 PM No comments:

I was looking out the kitchen window, last Sunday, and noticed a Black-capped Chickadee and an American Goldfinch quietly staring in the same direction. Upon further "investigation" I was able to find the subject of their interest, a handsome adult Cooper's Hawk, an apparent male based on the gray cheek and small size.


This past week there were many American Pipits near some farm fields in Templeton, a conservative estimate was in the 125 to 150 range. A few digi-bin flight shots of different single birds are below.

The feeders and yard continue to be fairly busy with bird activity. While not on the feeders a Tennessee Warbler was a nice surprise yesterday morning when I returned from birding High Ridge WMA. Its sharp 3 parted song was heard from high in the trees.
In the past few weeks several species have fed from our suet feeders, including the expected Downy, Hairy and Red-bellied Woodpeckers; Black-capped Chickadee, Tufted Titmouse, White-breasted Nuthatch. Others included American Robin, Chipping Sparrow, Indigo Bunting, Pine Warbler, Rose-breasted Grosbeak and Baltimore Oriole. A few photos below:

The past few years I've kept a yard bird list, I was surprised in 2011 to tally 101 for the year and 2012 98, currently the list stands at 73 as of May 13th. The feeders have been colorful the past few days, American Goldfinches in breeding plumage and Blue Jays have been recently augmented by Gray Catbird, Pine Warbler, Indigo Bunting and Rose-breasted Grosbeaks. On Mother's day 3 male Rose-breasted visited the feeder at once.

I heard my first yard Scarlet Tanager on Sunday, after work on Monday a female Rose-breasted Grosbeak was carrying nesting materials.

This past Sunday I lead the Forbush Bird Club's drive through tour of the East Quabbin watershed, beginning in the gate 45 area in Hardwick. We then covered parts of the former townships of Greenwich, Dana and North Dana and exited Gate 35 in New Salem.. While the spring migration was bit behind schedule based on our observations; the scenery, company, road conditions and weather were great even the black flies were "reasonable"!


Some "barometer" species, to gate the current state of the spring migration (for this area), are Gray Catbird (missed), Scarlet Tanager (missed), Baltimore Oriole (1), Rose-breasted Grosbeak (1) but the wood warbler species count was 13, about average for this trip. However within a week to 10 day these previously mentioned species will be back in good numbers. 66 species for the day was a bit below the average of 70 since I began leading the trip 8 years ago.

After returning the gate key to DCR headquarters I "spied" this Black Vulture atop a mill chimney in Ware Center.


Some recent feeder birds over the past few weeks:


All 6 common woodpecker species are now about near the yard, Downy, Hairy and Red-bellied visit the feeders about every day. A Yellow-bellied Sapsucker can be heard drumming from near by most mornings and an occasional Northern Flicker and Pileated Woodpecker are heard or seen.