Typically the local breeding Common Loons return to the area close to April first, soon after "ice out". This evening I checked Lake Wompanoag, on the Gardner/Ashburnham line, to see if they were on schedule as the ice had cleared off in the past week. I was very surpised the first loon I saw was a Red-throated Loon, a first for me in the area.
There are usually only one or two sightings of this species in Worcester County each year, so I feel very fortunate. Here is a digi-scope shot, showing the thin bill pointed at a slight upward angle, lots of white on the cheeks and neck along with the slight build and structure (less than 1/2 the mass of a Common Loon). 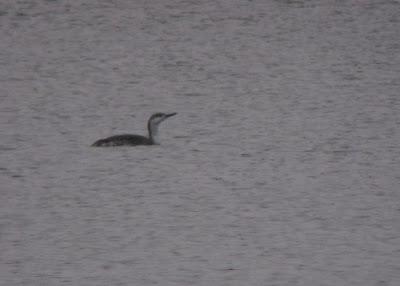 A winter or basic plumaged Red-throated Loon on lake Wompanoag, on the Gardner side.

There was also a Common Loon present far across the lake, on the Ashburnham side of the lake; and while visiting Crystal Lake, a few minutes later, I saw another Common Loon. The Wompanoag Common Loon was too far to check for leg bands and the Crystal lake bird had NO band on its left leg (the only one it lifted above the water). 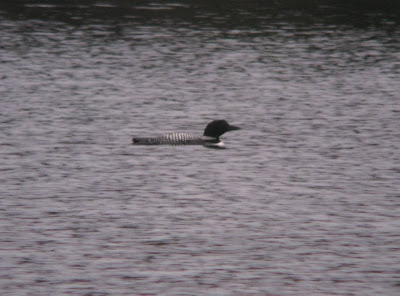 Yesterday Karin and I took a ride to the Newburyport area, mainly to visit the Birdwatcher's Gift and Supply to buy a few books. Barrett Bacall, who was manning the store, told us the Sage Thrasher had been re found at Salisbury State Reservation. A dead Yellow-billed Cuckoo had been found at Salisbury too, mid-May is a typical arrival date for this species... early is good....too early is deadly.
We arrived at Salisbury and noticed a 1/2 dozen birders standing at "attention", all optics pointing in the same direction is a good sign. The thrasher put on a great show, occasionally disappearing in a single cedar beside the road, only to reappear and begin feeding and sunning itself several minutes later. 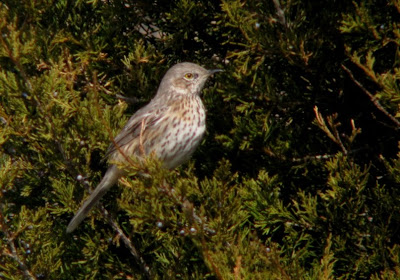 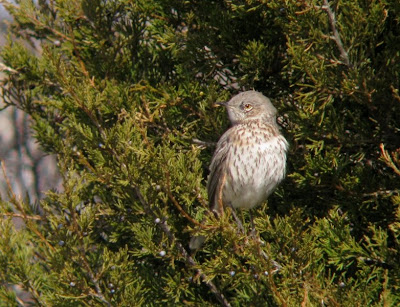 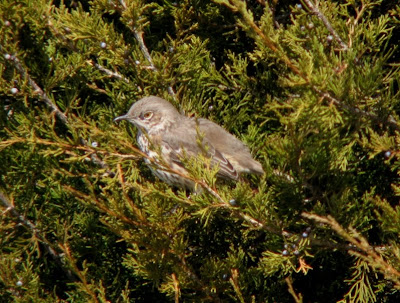 ..and another.
Afterwards, we visited Parker River National Wildlife Refuge and Sandy Point State Park. The "wrack line" was impressive, it contained hundreds of large pieces of timber and other debris. Apparently the recent floods must have "drained a lot of dead wood from low-lying areas, along the rivers, and flushed it into Plum Island Sound where came to rest on the beach. 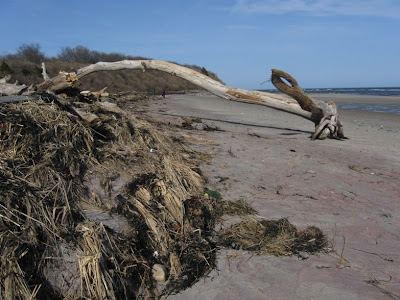 There was lots of wood along the shore, this tree formed a nice arch. 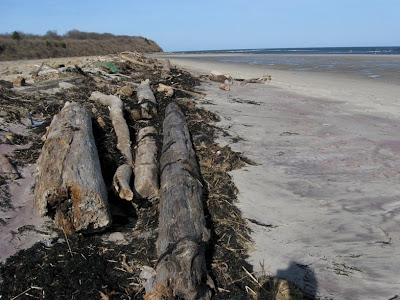 This was the scene along Sandy Point, at the southern end of Plum Island.
We could not find a Piping Plover at Sandy Point, but had a nice look at a Savannah Sparrow of the Ipswich subspecies. 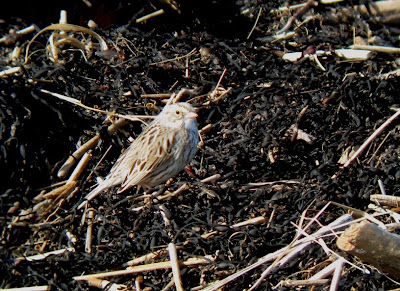 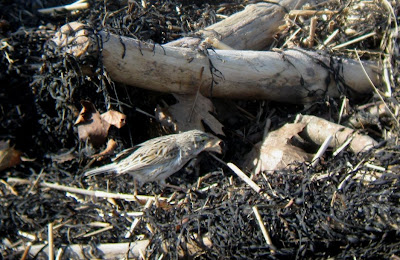 Another shot of the same "Ipswich" Sparrow
Across from the Plum Island Airport a Great Blue Heron showed nicely in a flooded hay field, catching a few small food items while it was observed. 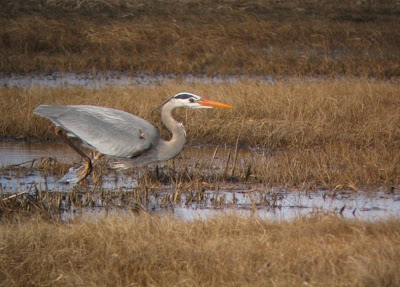 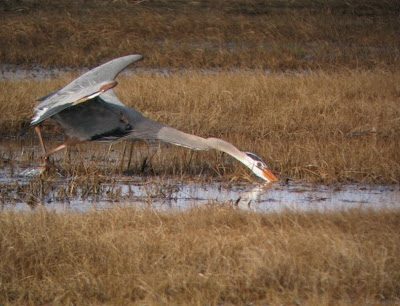 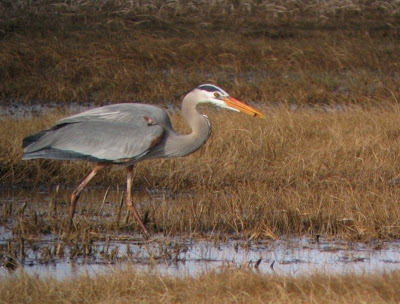 ....you call that a meal!
This morning on the way home from Melrose, I stopped by Bolton Flats and managed to count my highest total ever for Green-winged Teal in Worcester County, 460 was a hundred more than last Thursday! I counted through several times trying to get an accurate count and looking for a Eurasian type Green-wing. I did not find a "Eurasian teal" but did find an intergrade, very similar to one I had seen here last year, 3/25/2009. Here is a poor photo through the heary rain. 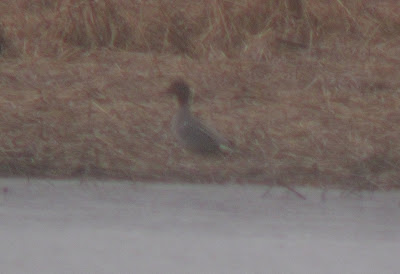 Here and There from Worcester County 3/25

I "hit" a number of good birding locales in Worcester County today, ranging from close to home in Westminster and Gardner and then to Wachusett Reservoir, Lancaster and Bolton Flats.

Last Sunday Karin and I hiked around the Crow Hills area, in Leominster State Forest. We had seen 2 unattended Canada Goose eggs, on a small island on Crow Hill Pond. Today, the eggs were still there and no parents were nearby. One would think that any self-respecting corvid (or other opportunist) would have taken advantage of that "situation", apparently the neighborhood has gone down hill on both ends of the equation. 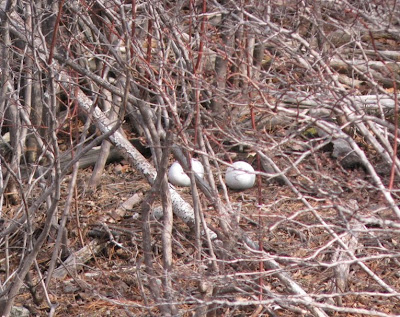 Goose eggs
My first Tree Swallows were seen near the Westminster Landfill and first Swamp Sparrow, with an American Tree Sparrow, in a shrubby wetland near Lake Wachusett.

High Ridge Wildlife Management area was also "lively", 3 Red-shouldered Hawks were interacting and calling high overhead. Song Sparrows were in....song...about everywhere and 2 handsome Fox Sparrows were a nice addition to my year list. American Robins were scattered on the fields and few Purple Finches "showed" nicely. The marshy wetland was nearly ice free, where the present Canada Geese, Mallards and Hooded Mergansers are likely to begin their "domestic chores". 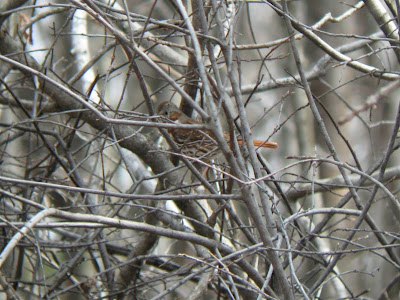 An obscured shot of a Fox Sparrow 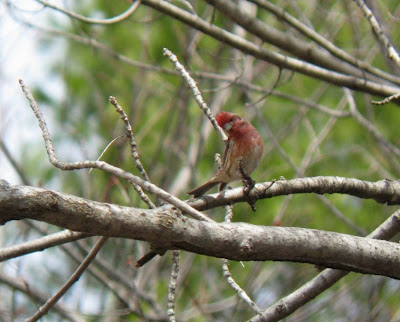 A Purple Finch curiously looks on.... likely wondering "what are those strange noises". 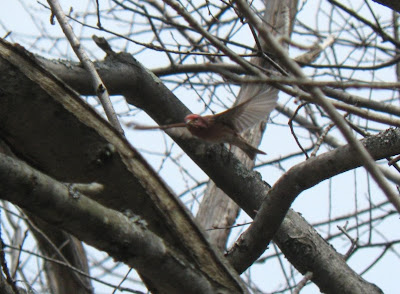 a Purple Finch in flight (a lucky shot)
I had stopped by the Fitchburg Airport hoping to find a Meadowlark or Kestrel, neither were present. The highlight here was a group of 4 Red-tailed Hawks soaring together. 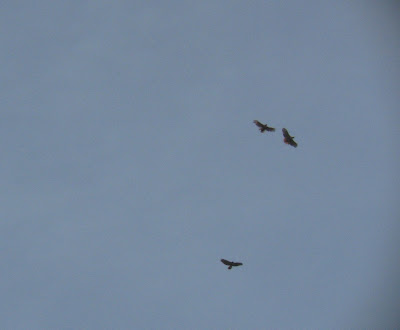 3 Red-tailed Hawks over the Fitchburg Airport 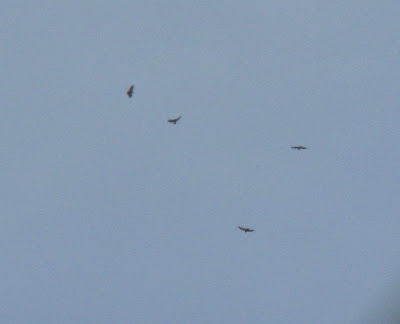 The same 3 as above with the 4th now in view
An Eastern meadowlark was present at Sterling Peat, in Sterling, I first heard its buzzy call notes as it flew overhead. Three ravens were near the Sterling Airport and the pond at Sterling Peat had a nice assortment of waterfowl, which included 105 Ring-necked Ducks. 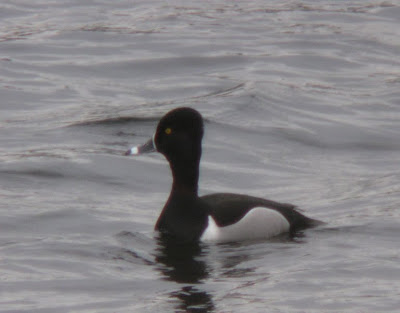 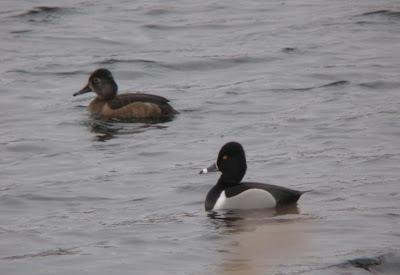 A handsome pair of Ringers
I checked out Dexter Drumlin, in Lancaster, for the previously reported Bonepart's Gull, this species is not likely to linger so "not so unexpectedly" it was not seen. Nearly 200 Ring-billed Gulls were present and at least 6 had tags (#'s 235, 475, 449, 450, 451 and 414). In the distance a large number of Common Grackles passed, numbering between 1500 and 2000 birds.
The Bolton Flats had another 150ish "ringers" present, which included tagged birds numbered: 158, 467, 442, 438 and 417. I suspect some of these were from the "record haul" that the DCR had captured and tagged on 3/16 in Leominster, when they captured 38, details of these birds should arrive from the DCR shortly.
Waterfowl is always a main attraction on "the flats, during early spring, and good numbers of Canada Geese and "at least 360 Green-winged Teal were seen (fortunately most were in the open, which is not always the case). Considerable time was spent combing through the teal looking for a Eurasian "type" and to count and recount, these little ducks are easy to overlook in the late day's fading light and vegetation. Other waterfowl present were Wood Duck, Black Duck, Mallard, Northern Pintail, American Wigeon, Ring-necked Duck and Bufflehead.
Posted by Tom Pirro at 8:50 AM No comments:

There has been a recent announcement of an upcoming crow poisoning effort to reduce mortality of Piping Plovers on the Cape Cod National Seashore. I thought it would be interesting to look at some historical American Crow data from the Christmas Bird Count database.

Here is the data from Massachusetts, while the sudden drop of birds per party hour, coincides to the occurance West Nile Virus, that appeared to bring the population back in line with previous levels prior to the 1990's. Of course we will see what happens over the next several years and this is just a small piece of the "pie" in the North East USA. 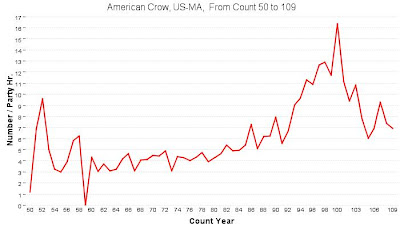 For your viewing pleasure here is more data: 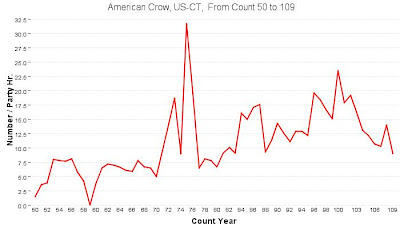 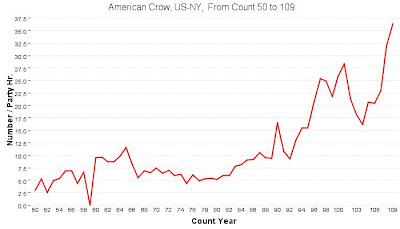 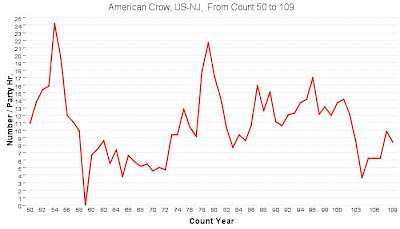 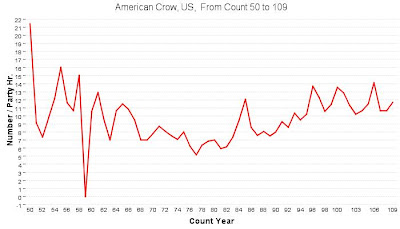 It might also be of interest to look at data from the breeding season, for now I have only looked at the CBC data.

The are certainly a number of tagged gulls flying around Central Massachusets these days, as part of the DCR's gull study. I have seen a number of different individuals over the past two years, some of swhich I have reported on this blog. Most intersting has been #360 which I first saw on Whalom Lake in Lunenburg, Ma. on 12/15/2009. 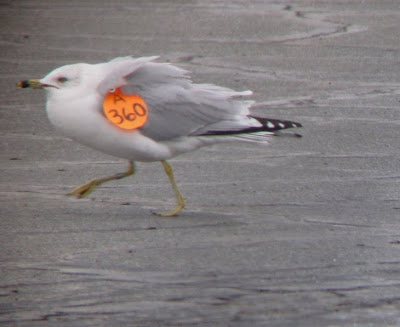 Today 3/4 at Fitchburg Airport, it flew directly overhead with appeared to be a Drakes Devil Dog. It was eventually stolen by a Herring Gull. 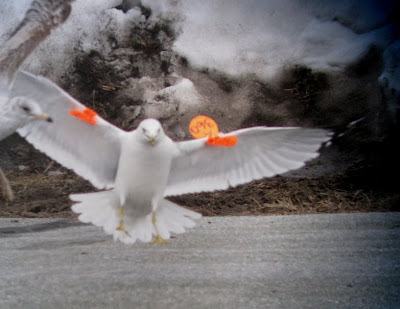 After being "mugged" it seemed to take its frustrations out on a few other Ring-billed gulls. 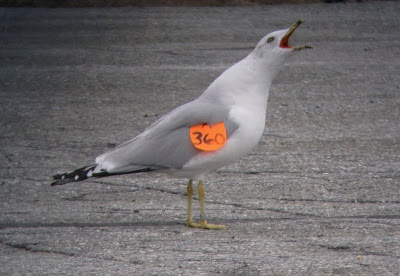 Giving its "long call" to warn off a few nearby "Ringers".
My sighting and locations of #360, including twice the same day at different locations.