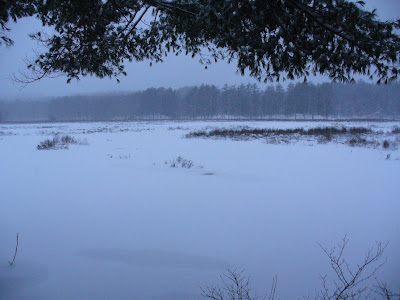 The birding was as bleak as the scene over "The Back Bay"
This would be the 15th year I cover this section of the Athol Christmas Bird Count and one of the more challenging. Weather forecasters predicted the snow would stop at before dawn, but it snowed steady and strong all day. Typically I walk the "Back Bay" section along the Otter River, and this year would be no exception. Last year I had tallied just over 20 species by the time I finished birding "The Back Bay", this year I don't think I had 20 individual birds. It took me nearly 1 1/2 hours before I "got" a chickadee, usually a large flock of American Tree Sparrows are roaming the wetland...I couldn't find them this year. 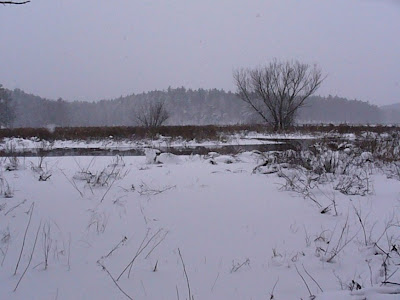 This brushy wetland is usually a reliable location for a big flock of Tree Sparrows, but not this year. Perhaps the recent ice storm pushed these birds away, perhaps I just missed them.
The walking was not nearly as difficult as I thought it would be, the tree destruction, from last week's ice storm, was not as severe as in Westminster and Gardner. On the down side, my make-shift "poor-man's Gortex" socks (aka 2 plastic grocery bags) failed to keep my feet dry during a stream crossing. Half my right foot would be numb for the remainder of the day and to add injury to insult...I lost a battle with a thicket, later on, and had to remove a few thorns from my face. New boots will be my Christmas list.
But, all was not lost, once I returned near the village I had a nice look at a Field Sparrow, my first on this CBC. A few minutes later I heard, then saw, a Swamp Sparrow along the river bank, another first for my section. 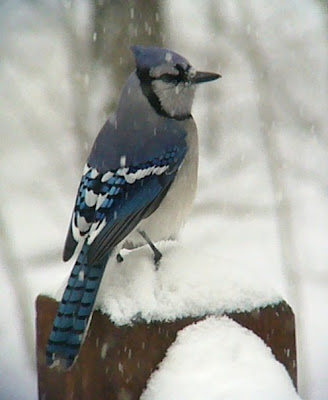 The handsome and often under appreciated Blue Jay, looking pretty sharp during the storm.
Along Memorial Street, I had a nice conversation with an older gentleman, who keeps a reliable feeding station. He mentioned he'd recently read about over-wintering hummingbirds at heated feeders, and I chimed in about the recent Broad-billed Hummingbird on Cape Cod. Maybe he'll install a heated hummingbird feeder for next year's count. I got my only Hairy Woodpecker and Pine Siskin of the day in his yard. That single siskin, mixed in with goldfinches, would be another first for me, in this section of the count. For the most part I walked the rest of the village streets and picked up the typical "feeder type" birds, but they were tough to find and fewer than normal. 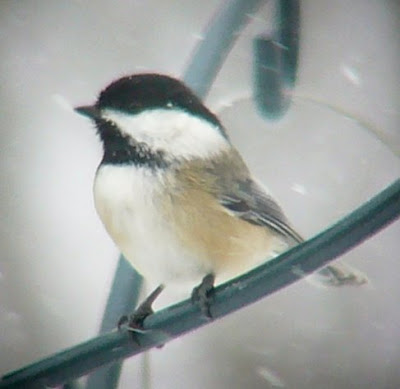 Black-capped Chickadee would get top honors for numbers in my section of the count, with 61.

In the afternoon I headed up to the Birch Hill WMA/Lake Dennison area, managing to add Red-breasted Nuthatch, a few Golden-crowned Kinglets , Black-capped Chickadees and Tufted Titmice. I snowshoed for about a mile, trying to " kick-up" a Ruffed Grouse but failed. The winter scenery and failing snow was picturesque, but the nearby heavily used snowmobile trails left little silence.

Thanks for the great photos of the recent weather events in the Westminster area. Your "beat" is one of the areas I regularly hike in, High Ridge WMA, Otto River and Leominster SF among them. I drive out Rt. 2 from Arlington for lunch and a hike as often as I can.

Recently, with the aid of my GPSr and some historic maps I've been trying to document some of the old roads and other items of interest in High Ridge. A newly acquired digital camera should be a useful additional to my toolset (once I become proficient with it).

Good to hear from you Don. This part of Massachusetts has a lot to offer for outdoor oriented people.

I enjoy reading your blog! I have recently started trekking up to the Leominster area for family obligations (I live in central MA) and have been looking for some good birding/nature spots. I have "discovered" the Quabbin Reservoir and Wachusett just by driving around and following the tree line! :D

Thanks for all the great information and wonderful photos!
-Barbara