I had planned a "human powered" big day for this year's birdathon but a last minute an opportunity came up to hook up with Jim Baird's birdthon team. With my son's prom Friday night I did not join the 6PM Friday start, but Paul Meleski and I made it to Jim's, in Petersham, Ma., a bit after 6AM and Jim and Ann Flatt were checking out Jim's property in a light rain. It was decided we would keep things "civil" and have breakfast as the rain cleared off, coffee, omelets and toast. 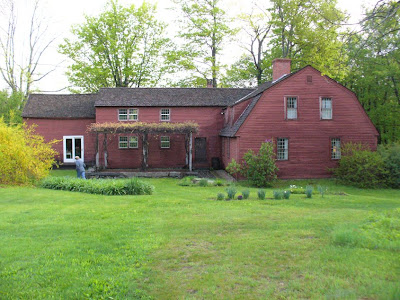 The oldest house in Petersham

After a tour of the 260 year old home, we got down to business on Jim's property and had some nice birds. A Ruby-throated Hummingbird, a pair of Scarlet Tanagers and Eastern Bluebirds showed nicely....a Lincoln's Sparrow, that Jim had seen the previous day had stuck around and was a nice addition. We walked down the road, missing a usually reliable Red-bellied Woodpecker, but 2 Pine Siskins at nearby feeding station filled that void nicely! 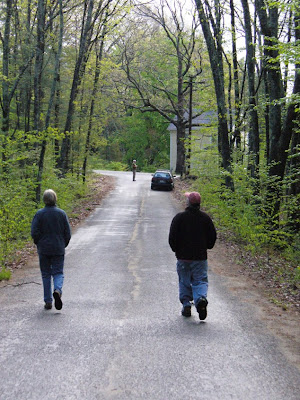 Ann, Paul and Jim looking and listening for Red-bellied Woodpecker 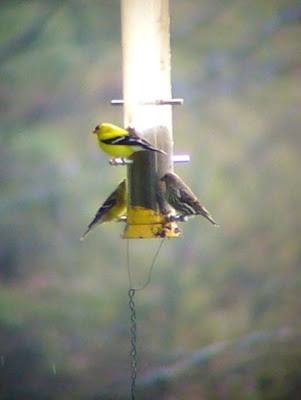 1 of 2 Pine Siskins in Petersham

Over the next hour and a half we hit some of Jim's choice spots around Petersham, by car, and continued to build the list. Red-shouldered Hawk, Swainson's Thrush and Wilson's Warbler were good additions, singing Brown Creepers and Winter Wren along with a stunning look at a pair of Blue-headed Vireos added to our total. We headed back to Jim's, tried and missed the Red-bellied again (but got a Hairy) and headed to ocean, next stop Lynn Beach and Nahant. 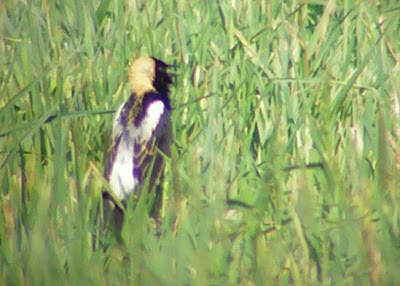 Bobolink near Maple Lane in Petersham
Turkey Vulture and Sharp-shinned Hawk made to our list during the commute and I encouraged Paul to keep tally of the House Sparrows as we passed through Lynn. Paul said he'd submit those numbers when I finish the Starling statistics from the trip! Off Lynn Beach we nailed all 3 Scoter Species, picked up a Horned Grebe and many Bonepart's Gulls, but NO Little Gull. A friend of Jim's, a retired Revere fireman, kindly let us scan the ocean from his yard on Little Nahant, during our visit we picked up Rough-winged Swallow and had a flock of 20 Purple Sandpipers pass by. 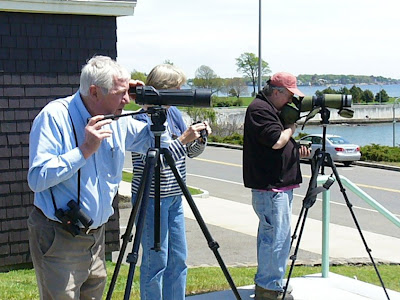 While leaving Little Nahant, Jim pointed to a tree, in a congested residential area, explaining that Ludlow Gricom had collected a Hairy Woodpecker from that tree in the 1940's. It was of northern race of the species and quite unusual for Massachusetts. The home owner was irate with the gun fire in his front yard and confronted Griscom. Mr. Gricom calmly tucked the bird into his game bag, put the gun ( what was called a "gamegetter", basically a sawed off pisto-grip over/under .22 cal./410 shotgun type deal) in the car, while the home owner ranted, and drove off! Mr. Griscom did have all the appropriate federal and state collection permits and kept in contact with the local law enforcement. ...and I feel guilty peering into yards with binoculars. 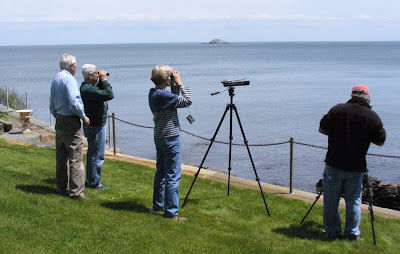 Jim lets our host use his binoculars to look at White-winged Scoters at Little Nahant, as Ann and Paul scan the ocean.
At the Nahant Thicket MAS we had nice looks at Nashville, Northern Parula and a stunning Cape May Warbler and added Magnolia Warbler and Common Eider further out on Nahant. Traffic was tough heading through Lynn and Salem and we ended up on the wrong side of bridge to make it to Pikul's Farm for the Wilson's Phaloropes and possible White-faced Ibis.

In Newburyport Harbor we added a few shorebird species with Black-bellied Plover, Least Sandpiper, Short-billed Dowitcher and Greater Yellowlegs. There were more Bonepart's Gulls, a few Common Terns , 4 Long-tailed Ducks and a "boat-load" of Brant. Plum Island hilights included, Northern Harrier, Willet, Gadwall, Green-winged Teal (2 pair), Tri-colored Heron, Marsh Wren but missing Purple Martin was a big miss! There was a large group of people looking at the Pines just south of Hellcat and the 4 of us were treated to spectacular views of a Great Horned Owl with Owlets!

We concluded the trip at "The Old Mill" restaurant in Westminster, Ma. and had a nice time recounting the day's birding, talking of wind farms, Ivory-billed Woodpeckers and what we all do when we're not birding!

Additional species seen by Jim and Ann the previous evening, within the birdathon time frame, but not seen or heard on Saturday: Common Merganser, Bald Eagle, American Woodcock and Bank Swallow for a birdathon total of 121 species.