In previous years I have found Eastern Meadowlarks at the old Leominster Landfill, off Mechanic Street. This evening I stopped to see if they were present, I had not seen them last year even though I looked a few times. As I pulled into to park on 6th Ave., a Red-tailed Hawk flew low directly over the car and landed on a telephone pole a hundred feet from me. This being a "city" bird, it appeared well adjusted to people and sat atop the pole for several minutes as I viewed and took digi-bin photos of it. 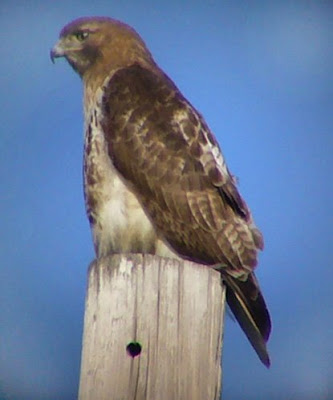 An American Crow was approaching and this Red-tail kept a close eye on the crow, perhaps anticipating it may return with an angry "mob". 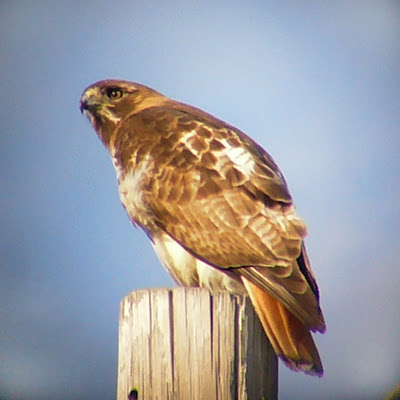 Red-tail watching a passing crow with some concern

I did manage to get around to scanning for the meadowlarks, after the Red-tailed distraction, and saw two in flight that quickly "fell" out of sight behind the crown of the hill.

Last Saturday, I drove to Quabbin Park to pickup the gate keys for this Sunday's (5/4) Forbush Bird Club trip. A Raven's nest is quite visible at the spill way , offering a nice view down into the nest. The young layed sprawled out and keeping a low profile in the nest, their body feathers had grown in and the flight feathers appeared to just be coming in. On the return trip I spotted this Broad-winged Hawk in Templeton, just off Rte 101. 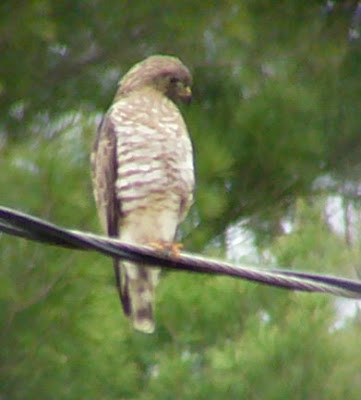 Hi Tom, My Niece lives a few blocks from the landfill and last Saturday (12/7) we saw 2 Red Tailed hawks there at the same time. They were both there for better than an hour, each sitting atop of their own post. We pulled into the bank parking lot to try and get a better look and perhaps some digital pictures. Not much success with the pics from our location, but they were cool to watch! Best, Laureen
PS - I love to read your blogs, thank you for posting. :)

That is a nice area for Red-tailed Hawks. They are attracted to semi open areas, so the landfill and rtes 2 and 190 provide some open areas. Driving highways can be an easy way to see Red-tails, as the perch along the median stripes and sides looking for small mamals to "pick off".

Back in the late "80's" I saw my first local Rough-legged Hawk at the old Leominster Landfill site. I haven't seen one at that site since.